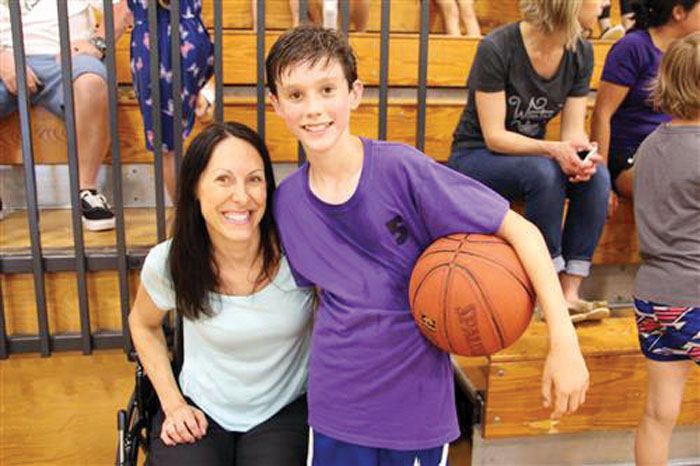 Meadowlark kindergarten teacher Sherry Allaire and her son Will 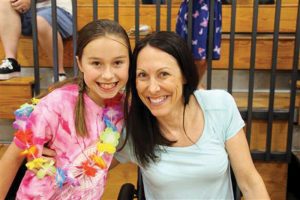 When Meadowlark kindergarten teacher Sherry Allaire learned she had a type of cancer that attacks bones, she was scared.

“When I got diagnosed in January with a rare form of osteosarcoma, I was scared,” Allaire said. “Scared for myself, but mainly for my two children and my kindergartners.”

She will never forget how comforting Principal Neal Raymer and Assistant Principal Tracy McAninch were when she told them about the diagnosis.

“I realized then that, if this had to happen to me, at least I was so fortunate to be working where I was,” Allaire said. “As soon as we shared with the Meadowlark staff, the outpouring of love, not only to me, but also to my two children was more than I could have ever imagined.”

“I was just in the middle of my third year at Meadowlark and I knew everyone said. ‘We take care of each other here.’ But, I had no idea what that really meant, until this experience. My colleagues immediately donated sick days, arranged detailed schedules to provide transportation for my children, made meals, sent endless cards, gift baskets and gift cards and never stopped letting me know how much they cared. Parents reached out, helping out with my two children, bringing warm meals, and some of these parents I hardly knew.”

“After surgery and recovery, I returned to work in a wheelchair and am still in one. The only place that being in this wheelchair is not really hard is at Meadowlark Elementary. So much of my strength, to fight through the emotional and physical pain, comes from this community, this community that I now fully understand is truly a family.”

On Friday night, May 31, Meadowlark students, families and staff members gathered in the gym at Meadowlark Middle, which shares a campus with the elementary school, for a basketball game between fifth-graders and adults. Proceeds from tickets and from the sale of raffle tickets and such would be donated to Allaire to help with medical expenses.

Sarah Selby, who is the technology specialist at Meadowlark Elementary, oversaw the organization of the night. This was the second such event. Last year, they played a game to help raise money for a Meadowlark family whose house had burned.

Along with supporting others, such a night is a way for everyone to get together, Selby said.

“We try to make it a Meadowlark family night.”

The fifth-graders would play all four quarters. The team of staff members, which included Principal Neil Raymer, would play three quarters, with a team made up of parents playing one quarter.

Selby predicted a victory for the adults.

Fifth-grader Matthew Brown predicted a win for the fifth-graders. Either way, he knew everyone would have a good time.

“For sure, it’s going to be fun,” Matthew said.

Allaire’s son, Will, was a member of the fifth-grade team so there was no question what team she was rooting for.

Her daughter, Kaya, is in third grade. With both of Will and Kaya zipping here and there, they were never in the same spot at the same time to get a picture of both of them with their mother.

A surprise awaited Tammy Cofer, who volunteers at Meadowlark Elementary. With the PTA Council naming her the Judy Mountjoy Volunteer of the Year for Winston-Salem/Forsyth County Schools, Raymer thought it could be good to announce that before the game.

Once Cofer received hugs and applause, the fifth-graders and adults took to the court.

At the end of the fourth quarter, the score was 43-40 with the staff winning.

“The basketball game was fun!” Selby said “It was great to see the Meadowlark community come together and show support for Sherry.”

“It was also refreshing to end the year with an event for the fifth graders where all of them were cheering each other on, smiling, and just being kids. We have great students, teachers and parents at Meadowlark Elementary School, and I couldn’t have done this event without all of them.”

After the game, Allaire again expressed how much the support of the Meadowlark community has meant to her.

“I am grateful for the support shown by the Meadowlark community for myself and two children at the game Friday night,” she said.

“I used to say my kids and I have no family here. That statement is no longer true. I want to say a huge thank you to my Meadowlark administrators, colleagues, students and parents for exemplifying all of the characteristics of family to myself and two children during this time.”

“I so appreciate the generosity continually given to me over the past few months. It is nights like this past Friday, in the Meadowlark Middle School gym, that put everything into perspective for me. Thank you, my Meadowlark family.”