Celebrating the Class of 2019 at Ward Elementary School 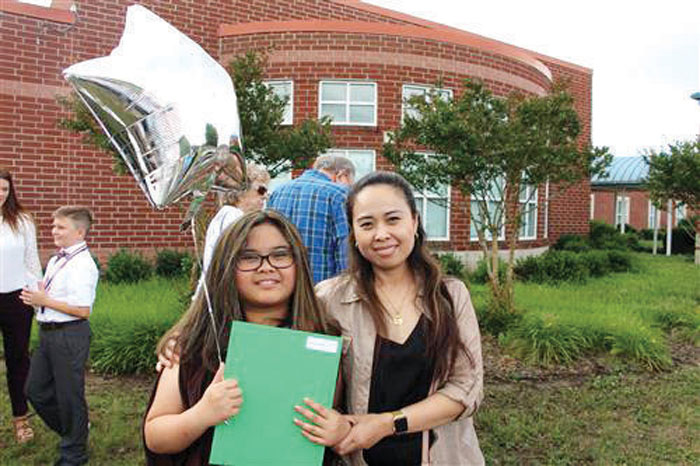 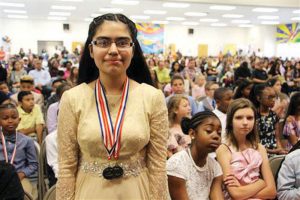 Fifth-grader Jennifer Romero-Monico has enjoyed her time at Ward Elementary.

“I like how you get to interact with people your age who have similar interests as you,” said Jennifer, who will be heading to Clemmons Middle next year.

First, she will have to decide where she wants to put all of her certificates and medals. During the Ward Fifth-Grade Recognition Ceremony on Monday, June 10, Jennifer headed to the stage for one medal or certificate after another.

In a room filled with parents and other family members, Wards’ 160 fifth-graders were recognized in a number of ways. Some received awards named after teachers. Some were recognized for working with the school’s television station.

Asked after the ceremony how many she recognitions she had received, Jennifer said she had lost count. So she went through the folder where she collected the certificates and counted — six certificates. Plus two medals hanging around her neck.

Probably with the other awards and certificates she already had at home, she said.

Niah Hairston, who has gone to Ward since kindergarten, was another member of the Ward Class of 2019.

“I’m really happy and excited,” Niah said. “I feel like I have made it so far. I feel like I am growing up and becoming a young lady.”

She, too, will be going to Clemmons Middle, which shares a campus with Ward. With so many family members there to celebrate their children, the parking lot didn’t have enough spaces to accommodate all of the vehicles, and many were parked in the grass lining the road to the traffic circle.

People started arriving well before the time the ceremony was scheduled to start.

As families walked down the halls carrying balloons and flowers, Amanda Ayers, who teaches third-, fourth- and fifth-graders in the AIG (Academically Intellectually Gifted) program, stood ready to help however she was needed.

She will miss the fifth-graders, she said.

Asked what she knows now that she wishes she had known when she was in the fifth grade, Ayers thought about it for a moment and then said, “Your character counts more than your grades.”

Who you are is what truly matters, she said. 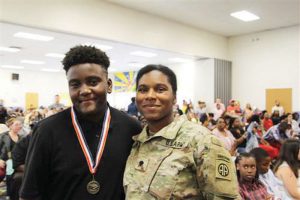 Thanks to the PTA, the students had treats awaiting them after the ceremony. As everyone was coming in PTA president Leaann Haynes and PTA vice president were setting up the cupcakes the PTA had bought for the students.

At the door to the gym/auditorium/cafeteria, fourth-grader Ruth Rodriguez was handing out programs. She is looking forward to fifth-grade next year but already thinking about the challenges that await her.

“I hope I learn a lot and pass my EOG’s (End-of-Grade Tests) so I can go to middle school,” she said.

More immediately, she was looking forward to summer and more time to go to the pool and play with her dog.

Inside, people had found seats. There to see Troy Brown were his father, Travis Brown, and his grandparents David and Anita Vick. Travis Brown was also experiencing that swirl of emotions that comes with a landmark for a child growing up.

There to see Phoenix Davis were his parents, Daniel Lowe and Jessica Davis and four-year-old brother, Oliver Lowe. Oliver was having big fun leaning all the way back over and announcing he was upside down.

On the stage, Principal Angela McHam was bustling about taking care of last-minute details.

“I’m excited as always,” she said. “Excited to see the students start a new chapter in their education journey.”

When it was time for the program to start, everyone recited the Pledge of Allegiance and fifth-graders Carley Gibbs, Jennifer Romero-Monico, and Aubrey McCarthy sang “The Star-Spangled Banner.”

The speaker for the morning was Richard Weiser, whose mother taught at Ward and whose daughter Briana was among the graduating fifth-graders.

Weiser was also there to announce the winner of the award named after his mother — the Debi Weiser Memorial Technology Award. For that award, the fifth-grade team — along with the school’s technology teacher — had chosen “a student that exhibits a caring, humble and genuine love for people and a love for learning.”

A particularly nice moment during Weiser’s talk came when he asked the fifth-graders to stand up, turn around and “give a big round of applause for all of the family members who supported you.”

They were clearly happy to do so, and the people in the room were happy to receive their thanks.

There were two other awards named after teachers. When Amanda Ayers got up to announce the Sandra Clodfelter Award, she said, “It was extremely hard to choose.”

In talking about the many students at the school willing to go “above and beyond,” she said, “I am one who believes that your character will take you higher than anything in life.”

When she announced the winner of Sandra Clodfelter Award, it was Jennifer Romero-Monico.

After all of the various awards and recognitions were announced and the chorus performed, the students in each class went up on the stage to receive a certificate.

“That’s my girl!” Mike Weidner called out as his daughter, Maddie, received her certificate.

Later, her mother, Vanessa Hiatt, said that she was both happy and sad.

“I’m sad because my baby is growing up,” Hiatt said.

After the ceremony, the students picked up a PTA cupcake as they headed back to their classrooms.