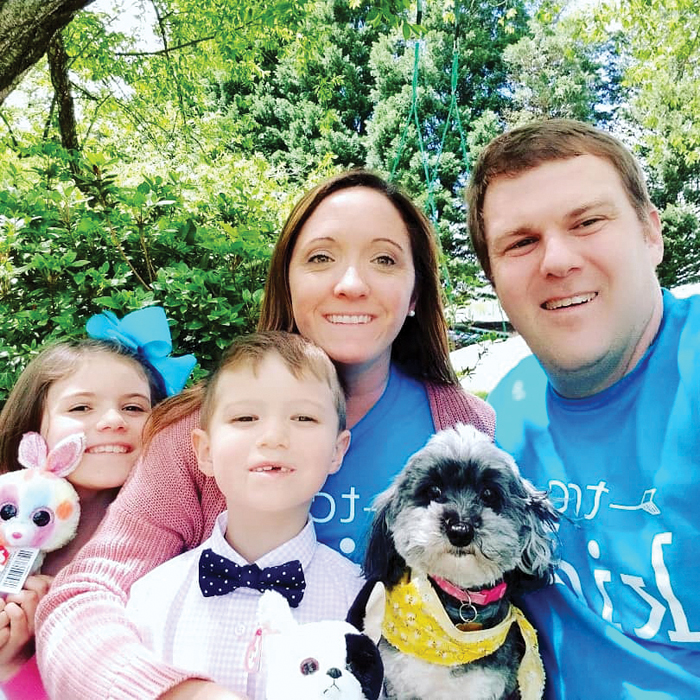 Chris Vaughan has spent his entire life calling the Winston-Salem area home. Always an athletic person, Vaughan took advantage of the opportunities in the community to challenge himself. “I remember spending many days at the Jerry Long YMCA when it first opened. I was in high school playing pick up basketball nonstop,” recalls Vaughan.

Vaughan’s passion for running was ignited during his middle school years. His coach at Forsyth Country Day School, Doug Pierce, was a role model that made an impact on him. “Doug was a phenomenal coach. Keeping someone at my age motivated and interested couldn’t have been easy. I was new to the sport, so the motivation component was huge,” reflects Vaughan. Vaughan ran cross-country as the youngest athlete for the team and enjoyed the camaraderie of his older teammates. His hard work continued to pay off in high school where Vaughan attended Mount Tabor. He received All State honors in cross country, indoor and outdoor track for three seasons in the largest public school division in the state.

Vaughan’s next chapter took him to Wake Forest University. “Both of my parents attended Wake. I knew the quality of education there and was a big Deacon fan,” smiles Vaughan. Earning a partial athletic scholarship for track and field at Wake was icing on the cake. Vaughan graduated in 2001 with a bachelor of arts degree in communication.

“I wasn’t quite sure what I was going to do with my degree. I had really considered going to law school. However, after working for an attorney, I quickly realized that wasn’t for me,” notes Vaughan. “I had a buddy tell me to get into substitute teaching while I tried to figure it out. I did and enjoyed the interaction with the students.” Vaughan ended up getting the certifications needed to teach math at R.J. Reynolds for six years and Salem Academy for two more.

“Right before I moved to Salem Academy in 2008, I decided to take on a new challenge and returned to Wake to attend the Wake Forest School of Business to get my master of business administration,” explains Vaughan. During that time, Vaughan met his future wife, Melissa. They were married in 2009 and had their first child, Maggie, in 2010.

Vaughan’s passion for running was used both in and out of the classroom. “I started a company, Tri Coach Vaughan, while teaching and getting my MBA. I often used my first entrepreneurship experience in my projects for school,” describes Vaughan. “My first ventures made me realize that I wanted to have my own business and build something. It really set the stage.” Upon graduation, Vaughan briefly worked for Morgan Stanley for a year. “I didn’t enjoy it. I didn’t like feeling boxed in. At that time, you couldn’t have social media accounts either. I’m an outside-the-box thinker and networker.”

Thus, in 2011 Vaughan began Firm Transitions, LLC. The initial intent of the company was to help be a legal placement group. Vaughan realized quickly that he really enjoyed helping attorneys grow and manage their workload effectively too. “We help build plans for 5-10 years down the road, and when partners are thinking of transition out and want the firm to keep going with the younger partners,” describes Vaughan. “It’s also a lot more fun now because my father, (Keith Vaughan) joined me this year. His experience has been helpful having spent 43 years practicing law at Womble Bond Dickinson.”

Vaughan realized the needs he was addressing in the legal field, also were found in other professions. He began the EBOSS Group (Every Business Offers Something Special) to accommodate clients from other industries. Vaughan’s former teaching background came out with this company because he enjoys educating people on the best technology to enhance their marketing. Simultaneously, Vaughan incepted MBizTools, LLC to help companies embrace the mobile movement. “We’ve developed an easy way for attorneys, entrepreneurs, and sales people to network and grow their business through the MBizCard, custom websites, and other digital marketing applications that provide for effective and efficient lead generation.”

If not tending to his business ventures, Vaughan can be found spending time with his family. They added son, Hardy, in 2013 to complete their family of four. “I enjoy coaching all of my kids’ teams just like my dad did growing up,” says Vaughan. He plans to instill the competitive drive and benefit of from sports that he was given. “I’ve completed an Ironman Triathlon before and am now signed up for a triathlon in September in Wilmington. There is a youth side to the event, and Maggie is going to participate in it. Right now, the kids and I are having fun training together.”

Our neighbor sounds exactly what Walt Disney had in mind when he said, “The way to get started is to quit talking and begin doing.” Whether it’s in business, family, or life, Vaughan has done just that.

Your Neighbor: Business man: Justin Osborn knows what it…