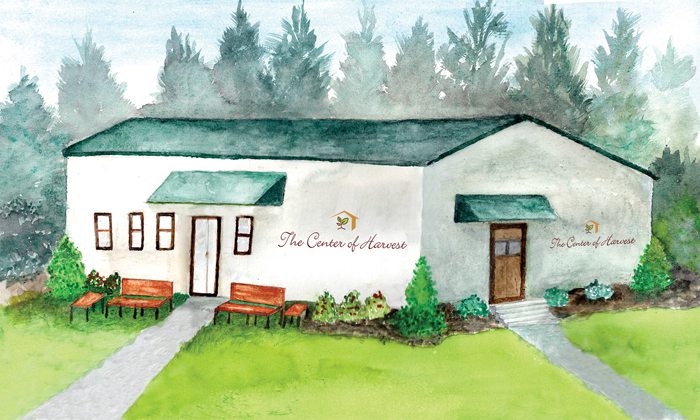 The Clemmons Food Pantry has embarked on a new chapter in the non-profit’s 15-year history by kicking off a capital campaign to raise $500,000 for a new 6,000-square-foot facility in the heart of the village.

The much-admired 501(c)(3) community organization provides needy area residents with supplemental groceries. More than 175,000 people benefit from its hard work and dedication. The association does so each week with approximately 275 volunteers, said Steve Eller, the former president of the food pantry’s board of directors.

He was succeeded as president on July 1 by Derrick Webb, who had served as the vice president of the all-volunteer 16-member board.

Indeed, no one involved in the non-profit is paid for their efforts so that most of its monetary aid can be used to buy low-cost food from the Second Harvest Food Pantry and local meat and produce retailers and distributors. In addition, the food pantry also accepts donations in the form of non-perishable food and fresh produce from the  community, as well as various government programs.

Although battling hunger in the area is the Clemmons Food Pantry’s biggest challenge, now the organization is asking for the community’s monetary help in paying for the larger building, one that will more than double the non-profit’s current leased space on Old Glory Road.

The building initiative began the first week of May with the mailing of approximately 9,000 announcements to homes and businesses in western Forsyth County, as well as to Bermuda Run and Advance in Davie County.

By late June, the effort had raised 7 percent of the $500,000 target, a figure that Eller described as “pretty good progress in a month and a half.”

“You know, capital campaigns are a slow process, not like our other fundraising effort in the fall which has a short lifespan,” he continued. “This campaign will have a long lifespan and it is why we are supplementing it with live events where we will invite donors and place newspaper advertisements. We feel very fortunate and confident in the campaign because this community has always been good to us and we think they will continue to be.”

Eller added that the new building, named the Center of Harvest, will be built and in full operation before all the money is raised. The facility will be located on Neudorf Road on a lot leased to the food pantry by Clemmons United Methodist Church. It will include 2,200 square feet of shopping space — a total that is as big as the entirety of the current food pantry space.

In fact, crews were scheduled to begin clearing the land for construction this week, with an official groundbreaking planned for July 10 at 10 a.m.

Eller invites everyone to the event and hopes to have civic and governmental leaders in Clemmons in attendance, as well. Afterwards, folks will be invited back to the current food pantry, just around the corner, for light refreshments and a chance to ask questions about the Center of Harvest. Blueprints and a rendering of the new building will also be on display.

He said the Clemmons Food Pantry’s goal is to be moved into the facility by the first of October, in order to be in full-service before the holiday rush.

Calvin Construction Service in Winston-Salem will assemble the pre-cut and pre-structured pieces of the building after all the clearing and grading is done on the heavily wooded site. Some underground utility work is already underway, Eller said, and once the ground is leveled and a retention pond is in place, the contractor will start erecting the building.

The Center of Harvest will be the answer to many challenges faced by the Clemmons Food Pantry’s staff, volunteers and clients, according to Eller.

“We have multiple issues with where we are now,” he explained. “No. 1, our current building is really just an office, but we had to create a warehouse atmosphere within it. So, one of the things we wanted in a new building is a better waiting area for our clients that gives them more privacy when they are being interviewed by our staff. Right now, that space is so noisy and hectic.

“Secondly, we want warehouse space and shopping space to be separate. As it is now, we have to stuff items wherever we can fit them. To be able to store food in one space and allow clients to shop in another will also make the whole process move much more efficiently. We open at 4 p.m. and sometimes clients will be lined up at 2:30, but may not get served until 4:30, which is a long time to have to wait.”

For the first time, the food pantry will have a dedicated receiving dock for unloading palettes of food for its clients.

“The amount of work that our volunteers do unloading trucks is immense and we need to simplify the process,” Eller added.

Once the food pantry’s volunteers unload the palettes, the food is then hand bound, put on carts and brought into the warehouse area. That process will be more streamlined at the Center of Harvest, he promised.

Another important design element of the new facility is a much larger parking lot than the organization currently has.

“It’s just not suitable for the number of clients and volunteers we now serve,” Eller explained. “When these folks come in, the small lot quickly fills, and cars end up lined up and down Neudorf. I have personally never been comfortable with our volunteers walking down the street, especially at night and in the winter months, after having come from their cars. Client and volunteer safety are imperative, and I think we address that with this new facility.”

There will also be a conference room within the Center of Harvest that Eller said will have multiple uses. One goal is to be able to have on-site board meetings for the first time, but he added that it will also be available as meeting space to other groups in the area.

Other key functions planned for the room include holding volunteer training and orientation classes, regular nutrition and diet classes for clients and workshop space that will match clients with health experts from Wake Forest Baptist Medical Center, as well as local credit unions, to help folks in need to overcome the root causes of poverty.

“Our goal is to help our clients move past all that and give them knowledge that will make life better for them,” Eller said.

The new name for the facility encompasses everything the Clemmons Food Pantry’s board wanted in a Center of Harvest, he added.

“That’s because we feel that it will be more than just a pantry but a center where people can come and learn a variety of things, like budgeting, that will prohibit future crisis situations for them. Our tagline has been and will continue to be “Feeding Hope” and we still believe that.

“We are giving people not just food, but the hope that things will be better,” he said.