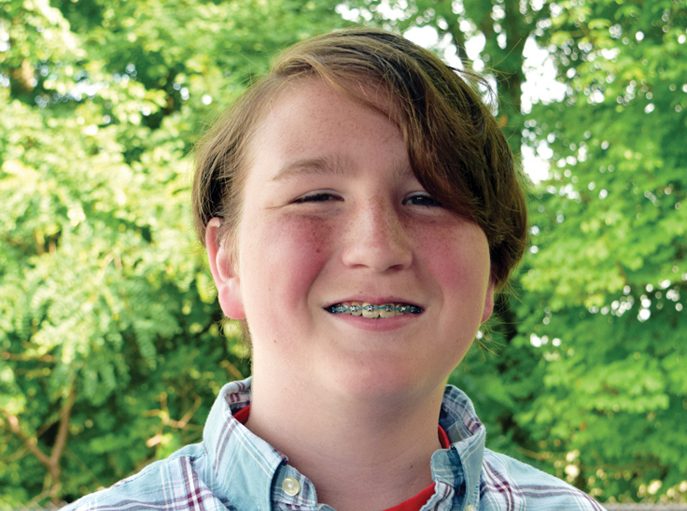 Discovering a friend has a talent you didn’t know about can be a nice surprise.  But when it’s your child or even yourself, then the surprise is even better.

That was the case for Nicholas Paugh and his family.

The 14-year-old was in middle school when he realized he could sing. “It wasn’t something I thought about or realized until then,” he said.

His mother, Emma agrees. “We had no idea.”

Fortunately, the young man had a choral teacher who recognized his talent. “My choral teacher in middle school, Patrick Schell, encouraged me,” Nicholas adds.

While participating in chorus during middle school, Nicholas had been selected for All-County Chorus and All-State Chorus, and during this last school year, Schell asked if he was interested in auditioning for the National Honors Chorus. Three students auditioned, and Nicholas was the lucky one to be selected.

“The audition meant we had to record a song that would be sent in and also sight-read music that was provided,” he explained. It was several months later that Schell notified him that he had been selected for this honor.

“When my teacher told me about the auditions, I immediately got nervous. It had been about a month since we sent the tape so I was surprised when he told me that I made the list. When he later said I made it, I texted my mom during school to tell her the news.”

Being selected for the chorus meant a trip to Kansas City, Missouri, for the American Choral Directors Association conference. It was here that those selected for the National Honors Chorus were able to perform for choral directors from around the world.

“We were there for four days and the group of some 300 students rehearsals and then performed in concert.” Emma said. “It was truly an amazing experience and we are certainly proud of Nicholas.”

In additional to singing at school, the young man has also been able to put his talent to good use as part of the Creative Drama Children’s Theatre in Clemmons. “I’ve been in seven musicals there and that’s what I’d like to continue to do. I really like being able to combine acting and singing.
He has appeared in productions of “High School Musical,” “Elf,” “Cinderella,” “The Wizard of Oz,” “The Sound of Music,” “Newsies” and “Footloose.”

Nicholas, a tenor, will be a freshman at West Forsyth in the fall where he plans to continue taking chorus and also drama.

“We were told to wait until his voice matured, but now we are looking for a private voice teacher so that he can take lessons,” his mother said. “If this is something he enjoys, we definitely want him to be able to continue.”