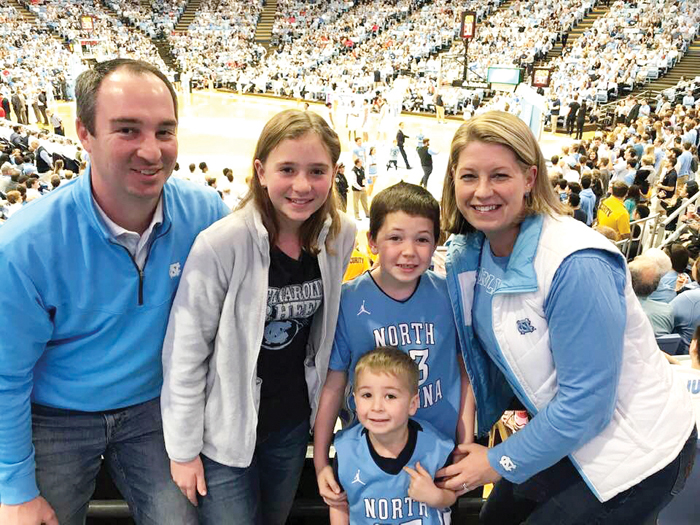 Leslie Hege enjoyed growing up in the Wilmington area as a child before making Clemmons her home in 2003. She spent her childhood years playing sports, and especially enjoyed basketball. Her high school team, John T. Hoggard High School, got to the semifinals for two of her four years. “We always lost to a team that had a player that went on to play at the University of Connecticut. That was tough,” remembers Hege.

A huge University of North Carolina at Chapel Hill fan, Hege went to college there to study nursing. Like many college kids, she went into it with a high school relationship. After three years they broke it off, and she met a guy named Will Hege through a mutual friend. “I had just gotten out of a serious relationship and wasn’t ready to hop back into one. All of a sudden he started working out with my roommates’ boyfriend and showing up at places I was at,” jokes Leslie. “I finally gave him a chance after six months of trying.” The rest was history for Leslie and Will. After college they headed to Dallas, Texas. Will had landed a position for American Airlines, and Leslie was lucky enough to be able to choose which area to start working as a nurse at the Children’s Medical Center in Dallas.

Leslie and Will knew they wanted to move back to North Carolina to be near family. They got engaged in 2003 on a visit to UNC.  “We got engaged under the Davie Poplar tree in McCorkle Place, a large tulip polar tree on campus,” recalls Hege. “The crazy part was, after I said yes, I was crying, and so excited, a tour group came by. It was a choral group and the director realized what was going on and organized them in a circle to serenade us. I was so in the moment I didn’t even think to ask them who they were or where they were from. I still wonder. I tried to find out after the fact to thank them.”

The Heges were married in 2004 and started their new life in Clemmons. Leslie found a position at Brenner Children’s Hospital as a nurse in their Pediatric Intensive Care Unit (PICU). They had their first daughter, Anna in 2007. Hege cut back her work days to two days a week while her mother-in-law watched Anna.

The Heges suffered two miscarriages between the birth of their oldest daughter and their son, Jack in 2011. During that time, due to the severe hormone swing in Hege’s body she developed Crohn’s disease. “It was tough because I had just had a baby, and I was also diagnosed with this disease and told I couldn’t keep working at the PICU. My medicine was helping me but it was also an immunosuppressant,” explains Hege. “It was devastating. My manager was amazing because he worked with me to have me work in another capacity. I would help upload the data from our hospital to a database with other hospitals to analyze treatment options and symptoms to help other patients. After two years, I realized how much I loved being with patients and not being confined to a desk. So I worked in the PICU sedation suite for minor problems, that didn’t require the same potential viral or bacterium exposure for my health. I worked as needed until my third child was born, Drew, in 2014.”

These days, Hege and her family can be found at lots of sporting events for their three children, and of course, the UNC Tarheels’ games. “Anna was at her first football game at three weeks old,” laughs Hege. Her two oldest children attend Southwest Elementary School and she enjoys volunteering her time there too. “Next year, my kids will be at three different schools so it will be a challenge, but I want to help and enjoy it,” notes Hege. In between sports, volunteer work, and life, Hege also gets recharged at her church, Ardmore Baptist.

Our neighbor has found that even through the challenges and adversity, it’s important to find the positive in life. As Alexander Graham Bell noted, “When one door closes; another opens, but we often look so long and so regretfully upon the closed door that we do not see the one opened for us.” Our neighbor has shown why the new door opened is always the most fruitful.