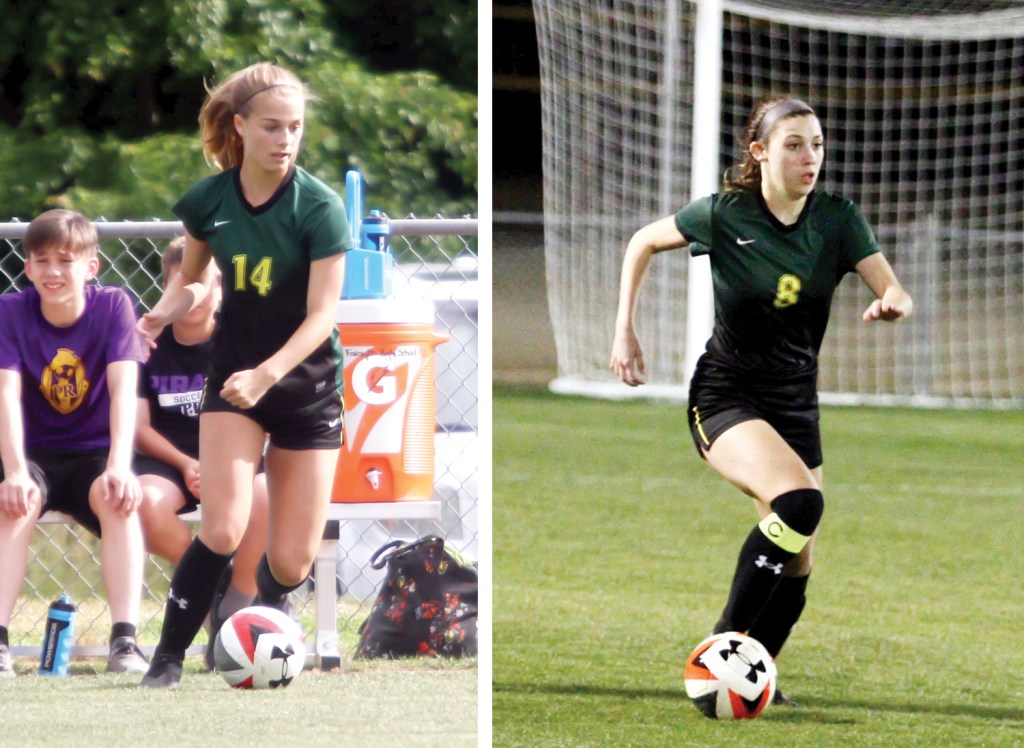 Riley Dorman and Riley Terry can still vividly recall the first time they were on a soccer field together.

Their first impressions of each other weren’t necessarily glowing but did reflect their competitive nature.

“It was at a tryout for the Twins (club team) before middle school started,” Dorman said. “She showed up at practice and I was wondering who this girl was who had the same name as me. She was small and feisty, and I could tell she was a good player.”

Terry was living in Saint Augustine, Florida, at the time, but was getting ready to move to the area. Her father was already here, and the family came to visit.

“Here was this other player who had my name and had the number that I wanted,” Terry said with a laugh. “All I was thinking was that we just weren’t going to get along. Turns out, she has been my best friend ever since.”

Soccer brought the tandem together. They have played on the same club teams since that fateful day and spent the last four seasons playing varsity at West Forsyth, helping the Titans win 86 games during that span, including the NCHSAA 4-A state championship in 2017.

Dorman scored the first goal in the state title game; Terry scored the game winner and was named the Most Valuable Player.

Both will have one more chance to play together at the N.C. Coaches Association East-West All-Star game next Tuesday before heading their separate ways to play in college. The game will be played at MacPherson Stadium at the Bryan Park Soccer Complex Tuesday, July 16, at 6:30 p.m.

Dorman will play at Catawba and Terry is headed to Western Carolina.

Terry knew she was selected for the team before the Titans’ season ended in the state playoffs with a 2-1 loss to Pinecrest. Dorman was a late addition to the roster.

“I remember being so emotional after the Pinecrest game and she and I just kept hugging each other,” Terry said. “We didn’t want to leave the field because at that time, that was our last game together. I was very happy for her when she found out she had another to chance to play in this game. I was excited that we have a chance to finish our high school career together.”

Dorman said she recently got a message from Scott Bilton, West’s coach, to let her know a spot had opened up and asked if she was interested.

“I was really honored because I didn’t even know it was a possibility,” Dorman said. “It really kind of came out of nowhere. Riley (Terry) was the first person I texted when I found out. It means a lot to get to represent West one more time and get to play with Riley again. We’ve grown together through soccer, on and off the field. Playing with her on the back line the last two years has been special. We just have this different kind of trust together.”

Terry said she found out about making the team when she got a message earlier this year from Bilton that told her she needed her to drop by his room as soon as she could.

“I thought I was in trouble or had done something wrong,” Terry said. “Then he showed me this letter that said I was selected to play in the game. It was a huge honor because it had been one of my goals since my freshman year.”

Dorman and Terry have shared numerous memorable moments both on and off the field.

The sleepovers. The dancing and singing before games. Road trips to games with their club team, including one right after winning the state championship.

“We got into a rented minivan and drove through the night to New Jersey to play in a club tournament,” Dorman said. “It was me, Riley (Terry), Bri (Hudnall, another member of the Titans’ team) and Brooklyn (Berry, a former player who graduated in 2018). That was kind of crazy and a fun.”

Terry’s mom drove so that the players could catch some sleep before their games the next day.

“I was asleep in the very back on all the cleats,” Terry said. “Dorman was laid out in the back seat. Bri was in the middle and Brooklyn was on the floor. We dropped Bri and Brooklyn off at their hotel and then drove about another hour to ours. I crashed in the bed and slept for a few hours before our first game. Riley and I started and played the whole game. My mom has a picture of me asleep at our hotel, still wearing my state championship medal. That was a lot of fun. We went to a Sheetz and got a pizza and loaded up on all kinds of junk food.”

Dorman and Terry still spend a lot of time together, though jobs and summer schedules have hindered that somewhat. They do try to get together to do their summer workouts in advance of heading to their respective colleges.

“We’ve been talking about this experience and how much fun it will be,” Dorman said. “It’s also bittersweet. We both recognize that it will be the last few moments of our soccer career together. It’s coming up quickly, but we are ready for it.”

In other East-West All-Star games, Jordan Fiorani will play for the West team in the boys’ soccer game on July 16 at 8:30, and Callie Scheier and Destiny Griffin, who led West to the NCHSAA 4-A state title in March, will play in the girls’ basketball game on July 15 at the Greensboro Coliseum at 6:30 p.m.