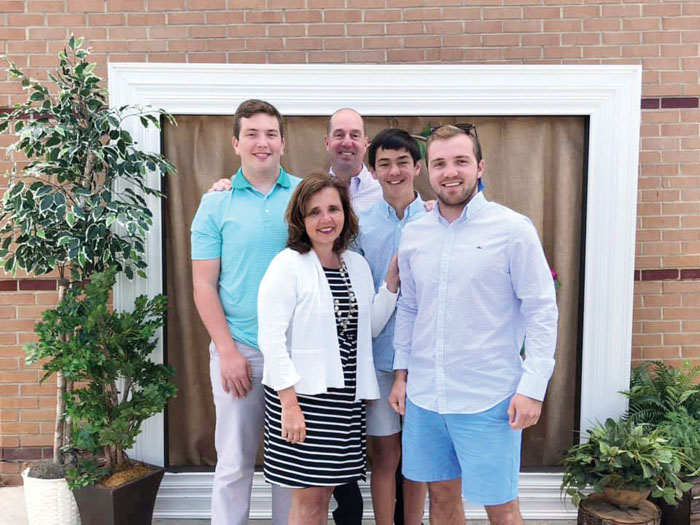 Holly Groce seemed to develop a strong sense of community and family values from a young age.  Although Groce was born in Germany when her father was stationed there while he served in the United States Army, her family quickly came back to Clemmons to raise their young and expanding family.

Growing up in Clemmons, Groce attended public school all the way through West Forsyth. “My parents both own their own businesses. They are hard-working people,” reflects Groce. Their work ethic was passed along to Holly. She did well academically and excelled on the West Forsyth tennis team by consistently making all conference and playing at states. “My dad coached everything we ever did,” notes Groce. “He enjoyed coaching us and other people’s children. Both of my parents were very into supporting other people’s kids.”

Anyone that knew Holly’s family was not surprised at her choice to attend the University of North Carolina at Chapel Hill. “My maternal grandparents and uncles were graduates from there. We were born and bred Carolina fans,” explains Groce. “I knew after my second year in college that I wanted to go to law school. I called home and let my family know what I had decided. Originally, I had planned on pharmacy school, but after biology I changed my mind,” recalls Groce. She ended up with a double major in political science and criminal justice.

Groce stuck to her undergraduate freshman-year plan and attended the Norman Adrian Wiggins School of Law at Campbell University in Buies Creek. Her elementary school sweetheart, Michael Groce, went to Maryland for a work opportunity. Still, time, place and work obligations would not keep them apart. “People often ask if we ever dated other people, but we really didn’t,” mentions Groce. Michael and Holly both knew that they wanted to get married after she graduated from law school and move back to Clemmons. Michael proposed to Holly on a beach trip with her family and they began to plan the next chapter of their life together in 1994.

Groce had gone to work for a local attorney immediately after law school. However, after her first son, Connor, was born in 1999, she realized how much motherhood had forever changed her. Groce decided to go back to work part time and began working for Robert Price & Associates. “Since 1999, motherhood has been my first job. I know a lot of money was spent on my education, and I don’t criticize anyone who does it differently, but that’s just how I saw it,” reflects Groce.

Groce has enjoyed other opportunities as well. “I was approached to be the attorney for the Davie County Social Services Department on a contract basis,” notes Groce. She appreciated the chance to be her own boss, much like her own parents did when she was growing up. It was also a career move that Groce believes allowed her to find a balance. “I am doing the kind of work that I enjoy. I love working for juveniles and people in their time of need. I like the interaction with people. I never wanted my degree to be about money or paper-pushing. I wanted to find a happy medium that allowed me to keep my kids as my priority.”

These days, when Groce isn’t helping community youth, she can be found at her children’s activities. As the rest of the Greater Forsyth Swim League finishes off its summer league on Tuesday at the Greensboro Aquatic Center, Groce laments that this will be the first time in 15 years that her own children and family didn’t participate. “I loved swim team at Brookwood. It was something all my kids got to participate in at the same time. With such a wide range of ages, that was nice,” reflects Groce.

Even though her children may be aging out of some of their past activities, Groce stays plenty busy and continues to give back to the Clemmons community in other ways, including serving on the Clemmons Community Foundation. Holly also enjoys participating at Center Grove Church with her family. And of course, Groce wouldn’t miss the next big family celebration. Her parents, John and Linda Miller, will be celebrating their 50th wedding anniversary in Rosemary Beach, Florida, with 18 of their family members.

It certainly seems Holly Groce has much to celebrate. While she is quiet and not one to boast, one can guess at the effort it has taken her to raise three children, maintain a career, marriage and family relationships — all while endeavoring to serve her community. Holly Groce seems to have maintained the balance that Albert Einstein was talking about when he said, “Life is like riding a bicycle.  To keep your balance, you must keep moving.”