PRP: Using your own blood to heal 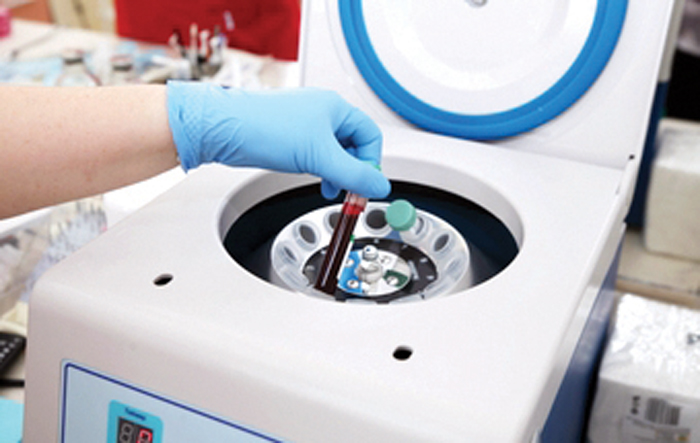 A patient's blood is spun in a centrifuge to separate plasma.

“I use the treatment for tendon problems, such as Achilles, and in elbows, shoulders and knees,” said Dr. Zachary Sandbulte, a primary care sports medicine physician at Novant Health Orthopedics & Sports Medicine — Clemmons. “It is injected into an area in hopes of stimulating healing. It does seem to help alter pain perception, lubricate the joint and help with inflammation.”

PRP is also used for patients dealing with arthritis. Sandbulte had a patient who said his arthritic knee felt better after a couple of PRP treatments recently. Tennis elbow (elbow tendonitis) is another injury in which PRP is often used.

How does PRP work?

A patient’s blood is drawn, then spun in a high-speed centrifuge to separate platelets from other blood cells. The process increases the concentration of platelets, which contain multiple different enzymes and cytokines that are important in healing injuries.

PRP is plasma that contains a concentration of platelets that is 3-to-5 times higher than what is typically found in blood. That fortified blood is then re-injected into the patient’s affected area.

PRP is usually not the first option for most patients, generally for financial reasons, Sandbulte said. Treatments cost about $500 each, and that usually isn’t covered by most insurance plans, which consider the treatment experimental, he said.

Sandbulte said he administers more steroid injections for patients battling degenerative arthritis than PRP treatments. But, if PRP was covered by insurance, he predicted it would become widely popular.

“There are no side effects or allergic reactions because your own blood is being injected back into you,” Sandbulte said. “I think if it was covered by insurance companies, I’d do PRP much more frequently.”

The number of treatments varies, depending on the patient and body area that’s affected.

“I usually do one treatment for tendon problems,” Sandbulte said. “Ideally, we would do 2 or 3 treatments for degenerative joint disease.”

Popular in the sports world

PRP is a popular alternative to surgery for many professional athletes, for whom most don’t worry about the cost of treatments. Or location. About a decade ago, NBA superstar Kobe Bryant flew to Germany for what was described as cutting-edge blood treatment for his knee.

Baseball star Alex Rodriguez also traveled there for treatment. It was easy to afford as an elite athlete 15-20 years ago, looking to perhaps sidestep U.S. Food and Drug Administration policies.

PRP was developed in the 1970s, and grew more popular in the ensuing 20 years. It emerged in professional sports in the early 2000s.

Today, it’s widely used by pro athletes hoping for a quicker recovery time from an injury, or perhaps trying to avoid surgery. The National Institutes of Health estimates that about 86,000 athletes (amateur and professional) in the United States are treated with PRP annually.

But, there haven’t been large-scale research studies to determine PRP’s effectiveness.

“We’re getting more data, especially pertaining to PRP and arthritis,” Sandbulte said. “That research data will increase, I’m sure.”