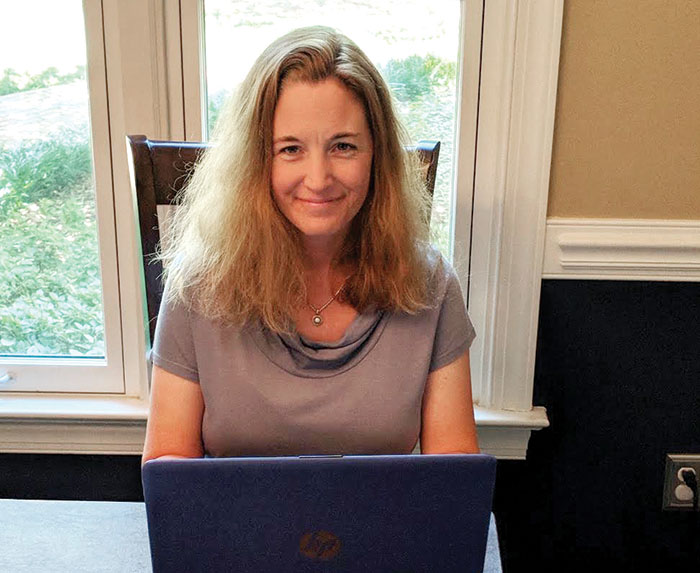 Kathryn Michel was born in Raleigh, but spent a considerable part of her childhood moving around the state. Michel’s mother had a successful career in banking which required a change of address whenever she was promoted. The moving around didn’t keep Michel from joining extra-curricular activities, however.

Michel enjoyed playing sports as a child, especially soccer and basketball. Her dad would coach her teams. Michel also really enjoyed spending her time immersing herself in books. As an avid reader, Michel notes, “I could have spent all of my days reading.”

When Michel was getting ready to graduate from high school, she started going to different colleges for visits. “I walked onto the campus at Wake Forest University and it just hit me. I need to do whatever it takes to get into here,” recalls Michel. “I was drawn to their community size and it was only two and a half hours away from home. I was impressed with their community service commitment.”

Initially, Michel considered going into pre-med. That would change. “I realized I wasn’t science-minded. While I grew up watching and loving Doogie Howser, and appreciated the idea of building relationships in the medical field, I grappled with being scared at the site of blood,” explains Michel. Ultimately, it was an earlier work experience that would guide her eventual academic and career path. “I worked at a summer church camp when I was 16. One of the older counselors was a teacher and recommended that I consider it because of my love for kids,” Michel ended up getting a bachelor of arts degree in social studies education. While Michel was pursuing her academics at Wake Forest, she also took advantage of the community service opportunities offered through her sorority, Tri-Delta.

After college graduation, Michel decided to move to Chapel Hill for a year. There, she set her sights on finding a teaching job. It turned out to be harder than she had anticipated. Michel held several jobs, including substitute teaching, in the hopes that it might lead to a more permanent position. When a friend mentioned an opening at R.J. Reynolds High School for social studies, she came back to Winston-Salem to fill the vacancy. Michel’s first year at Reynolds was a busy one. In addition to teaching, she also helped coach the girls soccer team and cheerleading squad, and was involved in heading up the community service club. She also met her future husband Ryan Michel, who was himself a newly-minted teacher. Former principal Stan Elrod would joke about how they met — “You two met in high school.”

After two years of teaching and having just gotten married, Michel decided to go back to school to get her master’s degree at Wake Forest. She would find the experience to be different and more enriching in some ways than her undergraduate years. “I always knew I wanted an advanced degree,” reflects Michel. “I loved it. It was all about the classes. There weren’t any distractions that you have while you are an undergraduate student.” Her year of intense classes were enjoyable as she focused on her thesis, which dealt with women in the South during the 1700s and 1800s. “I would travel around the state reading old collections of letters that women had written to each other. It was very interesting.” Appropriately, while Michel was in graduate school, she also worked at Old Salem and got a greater appreciation for the archives maintained by the Moravian Church.

In the meantime, Ryan and Kathryn knew they would one day want to expand their family after they had a chance to enjoy their married life. In December of 2001, their oldest son Simon was born. “I knew I wanted to stay home while he was younger,” says Michel. Tutoring student athletes from Wake Forest in psychology, ancient history and philosophy allowed Michel the flexible schedule she wanted in order to spend more time with her son. After Simon got a little older, Michel and her husband decided to try again for another baby. This time, Michel suffered a miscarriage. Nonetheless, she wasn’t willing to throw in the towel on growing their family. “I knew I didn’t want to give up on the dream of having another baby,” reflects Michel. The Michels had their youngest son Sam in June 2009. “Sam was born early at 5 pounds, 5 ounces. We didn’t have anything in our house that was small enough to fit him, so I sent my mom out to the store to buy preemie-sized clothes immediately.”

Michel committed herself to being a full-time stay-at-home mom until Sam was four years old. In Sam’s last year of preschool, she went back to work as a teacher at his school. Once Sam was in kindergarten, she was hired to work as a teacher for the Career Center part time.

Things haven’t slowed down since then. Michel currently has a full work schedule. She is still teaching at the Career Center and conducts online courses in history. She will also be adding AP psychology. “I love it because I love learning. I love helping kids become aware of the world,” reflects Michel.

In Michel’s free time, her reading is devoted to research for teaching. She also cherishes walks at night with her husband, when they can reconnect after a busy day and get exercise. The Michel family also likes to take walks from their home in Clemmons to nearby restaurants. They make it a priority to take at least two family vacations as well.

Michel subscribed to the words of Albert Einstein, “Strive not to be a success, but to be of value.” Ultimately, by prioritizing her family and working towards a career that impacts future generations she wound up being both.