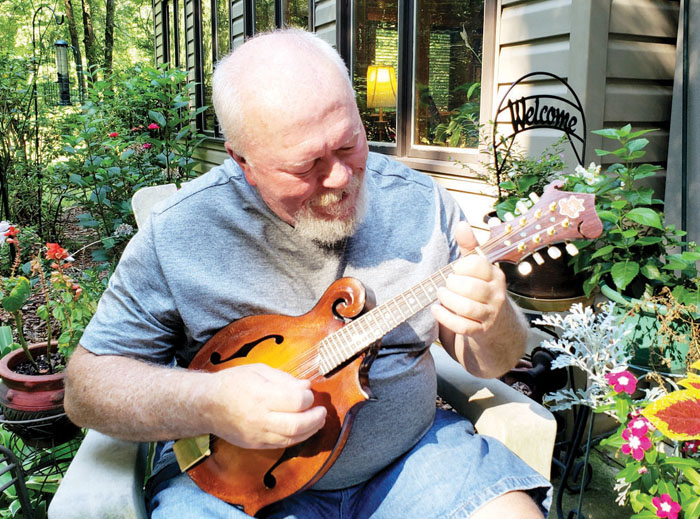 Bluegrass picker Tom Sharpe had reverse total shoulder replacement because he was in constant pain.

Tom Sharpe, 65, said a small part of him died when shoulder pain caused him to give up playing the guitar more than 10 years ago. He tried ice, heating pads, over-the-counter creams, cortisone shots, and three conventional orthopedic surgeries. Nothing worked.

For Sharpe, help came at last when he was referred to Dr. Richard Haigler, an orthopedic surgeon at Novant Health orthopedics and sports medicine in Clemmons. Skeptical, but eager to play the guitar again, Sharpe agreed to a reverse total shoulder replacement.

It changed his life.

Sharpe and his five siblings grew up on hard work and bluegrass music. His father, a long distance trucker, would often return home in the early morning and wake the kids by playing his old Gibson guitar in the family room.

“Dad was my John Wayne,” said Sharpe. “He taught us to work hard and to play music. Those were the best days of my life.”

His mother kept order in the home and food on the table. She also made sure all of the children were dressed and at church on Sunday. It was there that the Sharpe, 17 at the time, spotted his future wife, Rhonda, just a few pews in front of him. The couple celebrate their 45th wedding anniversary later this year.

‘Pain will make you depressed’

Before long the couple had a house and two kids of their own in Winston-Salem. Not afraid of elbow grease, Sharpe worked as a welder for 47 years to keep a roof over their heads.

“You do what you need to do to provide for your family,” he said. “But welding took a toll on my body.”

In 2001, pain developed in his right shoulder. His doctor explained that his rotator cuff (muscles and tendons around the joint) was torn and that surgery could fix it. Unfortunately, the surgery came with a long recovery period and a year later, Sharpe reinjured the joint. He had shoulder surgery again in 2006, but it did not help.

“I was in so much pain after my second surgery that it made me depressed,” he said. Desperate for relief, Sharpe agreed to have his third surgery, a partial shoulder replacement, in 2011.

“That didn’t work either,” he said. “Not long after that, my right shoulder joint deteriorated so much that it visibly hung down lower than my left shoulder. The pain caused me to quit playing the guitar.”

With dad in his thoughts

Discouraged but not defeated, Sharpe learned how to play the mandolin in honor of his dad, who died in 1999. By switching to a smaller instrument, he could manage the pain better and still play his beloved bluegrass music with his brothers.

“When we would play it was like dad was right there with us,” he said. “I know it sounds crazy, but I would catch myself looking to see if he was in the chair beside me.”

‘Right surgery for the right patient’

“I always like to say if you do the right surgery, for the right person for the right reason, it usually works,” said Haigler. “If you think about the shoulder as a ball and socket joint, the partial replacement he had a few years ago somewhere else addressed the ball side of the joint, but it didn’t correct the socket or take into account his chronic arthritis.”

As a result, he explained that wear and tear along with rheumatoid arthritis caused the socket to continue to erode. To correct this, Haigler recommended a reverse total shoulder replacement.

This complex redo type of surgery involves a two-step process. The first step requires the removal of the old hardware implant. The second step involves carefully inserting a new ball and socket implant into the shoulder joint in reverse order. The goal with this non-conventional approach is to reduce pain and restore functionality for patients with severely damaged shoulder joints.

The surgery was completed at Novant Health Clemmons Medical Center in March 2019. Sharpe woke up with no pain in his right shoulder. He also noticed that his left and right shoulder alignment were even again.

“Mr. Sharpe has done exceptionally well from a difficult starting point,” Haigler said. “But I was equally impressed with his wife. As a Novant Health nurse, she did her research on everything ahead of time, making the conversation easier and more instructive. In orthopedics, we don’t necessarily add years to our patients’ lives, but we try our best to add life to their years.”

Throughout it all Sharpe never lost his faith. “Me and God have several conversations every day. I believe through prayer he brought me to Dr. Haigler and Dr. Haigler gave me my life back.”

After several weeks of rehab, Sharpe is pain-free for the first time in 19 years. He also recently started playing the guitar again — a passion he hopes to pass on to his four grandchildren.