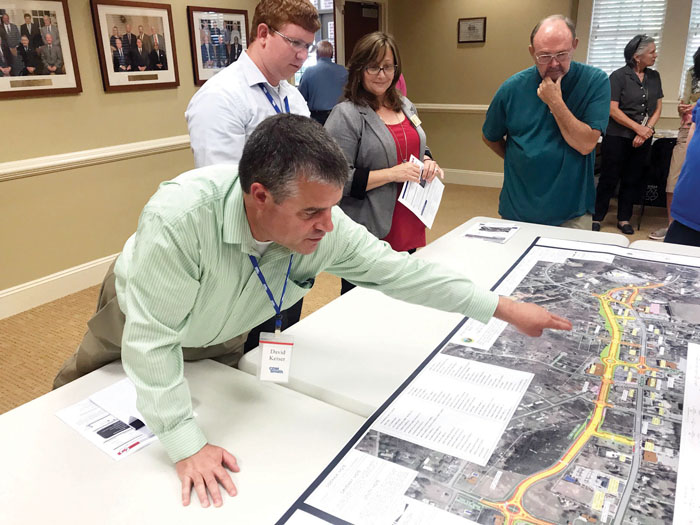 David Keiser, PE, of engineering firm CDM Smith points to the map while answering a question about Great Wagon Road during the NCDOT public meeting. Photo by Jim Buice.

A second “main street” has long been in the plans for Lewisville to maintain orderly growth and a small-town feel.

And that vision came into sharper focus with the recent NCDOT meeting at Town Hall to receive public input and answer questions about the Great Wagon Road project.

Town leaders and residents began looking to the future not long after Lewisville was incorporated in 1991, including a transportation system that wouldn’t look anything like what developed into the busy and dangerous Lewisville-Clemmons Road in Clemmons.

One possibility was adding a parallel road — such as Great Wagon Road — to Shallowford Road, which would ultimately complete a vertical downtown loop as the town continued to grow and traffic volumes increased.

“We just completed a traffic study recently that showed that things operate well today, but in 2040, with more development, that will cause congestion, and this will add capacity to meet that future need,” said Connie James, PE, who is Division 9 project engineer, at the July 25 meeting.

The proposed extension of Great Wagon Road from Shallowford Road to Lewisville-Vienna Road, which covers 1.1 miles and will have four roundabouts, will have two travel lanes with turn lanes at some intersections, medians, 4-foot wide bicycle lanes in each direction, a 5-foot wide sidewalk on the south side and a 10-foot wide sidewalk/multi-use path on the north side.

“If you look at our handout here, one of the things it talks about is improving connectivity through the downtown area, supporting economic development and keeping it multimodal focused,” James said.

Hank Perkins, town manager for Lewisville, said that while the new road will help with traffic mitigation for the future, it will provide the “framework and the backbone of the downtown as it will exist” in the coming years.

Although there were many preliminary plans made going back to the 1990s, including establishing a reserve fund for future land acquisition for construction of Great Wagon Road, officially moving forward with the project came in 2015 when CDM Smith was hired as the engineering firm. This was the third and final NCDOT meeting.

“Conceptually, the project is developing is nicely, and getting public comment on the direction the road is going on and each successive plan builds on the last,” Perkins said. “What we’re seeing this evening represents a culmination of a lot of public input over the years.”

James said that “the timetable right now is 25 percent plans. Hearing things from the community will help us refine the plans as we move forward into 65 and 75 percent, which is when we begin right-of-way acquisition.”

“We’re really pleased with the number of folks who have turned out to talk with us,” said James, who added she received a number of comments — from business owners questioning when the project was coming, and the impact it might have, to residents wondering about access to certain properties and how that would change during construction.

Pat Ivey, who heads up NCDOT’s Division 9, said he recalls the town talking about Great Wagon Road when he took the job in 2000 and compared the two downtown parallel roads in Lewisville to Kernersville’s Main Street and Cherry Street.

“It’s the same type of thing,” Ivey said. “Both of them are two-lane roads and were originally planned to be one way. The roundabouts are what makes it work. Kernersville does not have them. This will function a whole lot better here. It will really make a big difference.”