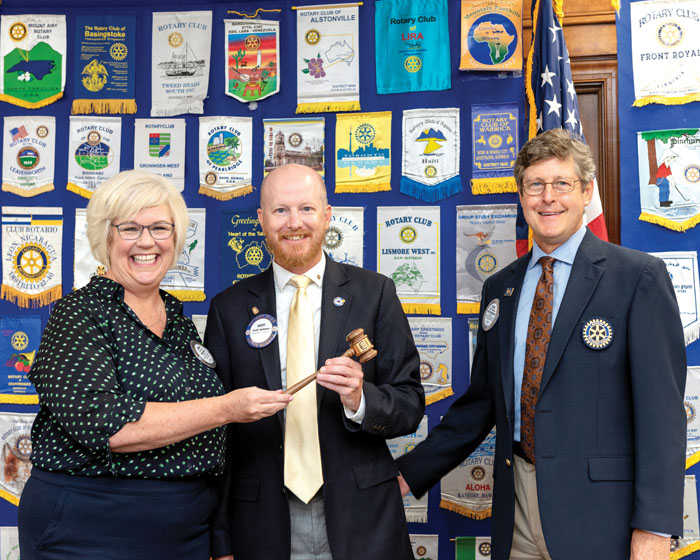 What makes a life well-lived? Ralph Waldo Emerson believed “The purpose of life is not to be happy. It is to be useful, to be honorable, to be compassionate, to have it make some difference that you have lived and lived well.” Stephen Richards had the view, “When you reach out to those in need, do not be surprised if the essential meaning of something occurs.” They both hit on a central theme, that helping others is the true key to what may define a life well-lived. Scott Spillman has taken this philosophy to heart put it to work in his new role as president of The Clemmons Rotary Club.

Spillman is no stranger to achieving and professional achievement, as he began is career with the YMCA at age 16. At the YMCA, Spillman has filled such positions as sports director, associate executive director and development director. Currently, he is the branch operations director at the Yadkin Family YMCA. His dedication to the YMCA has certainly paid off in his career, as has his dedication to community service. Now, Spillman looks to achieve even more professionally and personally, as he steps into the role of president of the Rotary Club.

“The Rotary Club has been good for me both personally and professionally. It has helped me out in my professional career by connecting community members with a servant’s heart to volunteer opportunities at the YMCA. Many of the fellow Rotarians have become YMCA board members, volunteer coaches, donors and friends,” says Spillman.

“By staying involved with the Clemmons Rotary Club it has allow me to stay connected with some very close friends. It also allows me to continue to serve the Clemmons community which I care a lot about.  Although I have never lived in Clemmons I have enjoyed being a part of this community for over 25 years working with the YMCA. This community is filled with great church leaders, a strong chamber of commerce, great schools and so much more,” he adds.

Spillman’s success in the club seems to be driven by his belief in its values and efforts in the community and the world. “Rotarians are people of action. We are proud to support so many community non-profits including Cancer Services, The YMCA, The Boy Scouts, The Clemmons Food Pantry, The Davie Humane Society, and a lot more. We also have a few international projects that we are proud of including our relationship with Saving Little Hearts of Nicaragua, Sister to Sister, and supporting a Rotary Club in Argentina. This year our motto is ‘Rotary Connects the World.’ This club is certainly doing that,” he continues.

As Spillman takes the reins of the Rotary Club in Clemmons, he has a very clear and purposeful mission for the future of the club. “One of rotary’s focus is eradicating polio. We are very close to doing just that. I know hunger is a big issue in this area and that’s one of the things that we are wanting to do locally to make a difference. We have spent time this past year learning a lot about the opioid crisis facing this community as well and looking to see how we might can impact that. I see this club continuing to connect more with families and young professionals that are looking for a way to give back. There are many ways to be a part of this club even if you are not an early riser,” he concludes.

No matter what actions the club takes in its near future, one thing is for certain, they are being led by a president with a mission and a purpose. Through his years of hard work and service with the YMCA and the Rotary he has seen what needs to be done and what can be done to help. Now in his new position with the Rotary Club, Scott Spillman looks to continue his life well-lived, and move others to do the same.