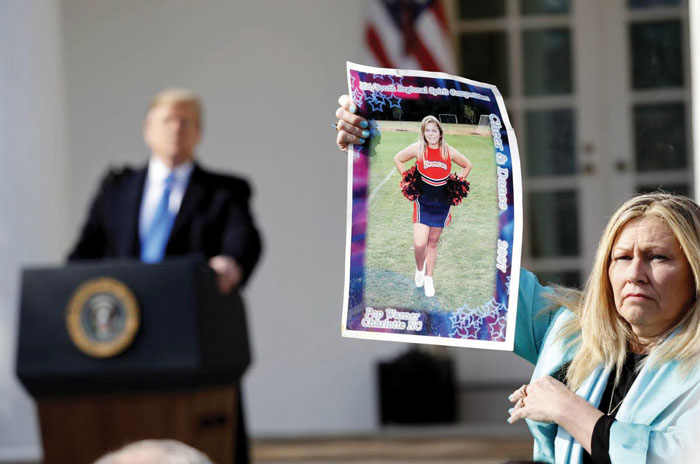 Susan Stevens was honored in the Rose Garden by President Donald J. Trump for her work to help end the opioid crisis following the death of her daughter, Victoria to an overdose.

Susan Stevens lost her 22-year-old daughter Victoria on Jan. 22, 2018, to a drug overdose. The Clemmons community mourned the loss of the former West Forsyth graduate who was an accomplished student, leader and kind person to her peers. Susan has made it her mission to turn the tragedy into a teachable movement to help other children who may fall victim to the opioid epidemic. “I’ll be the first to admit I used to judge kids who would use drugs. I never thought it would happen in my family. I didn’t realize that those children were often trying to cope and escape from something that had hurt them,” explains Stevens. Stevens has formed the non-profit organization called Tealdrops to raise mindfulness through, as she says, “Tealize, Realize, and Energize.”

Tealdrops was recognized by President Donald Trump for being “pivotal” in effectively combating the opioid epidemic as it undertakes its mission to raise awareness about addiction and the contributing factors.  Tealdrops has fought to make teal the international color of addiction, for which it was duly noted in the Washington Post.

Stevens’ work for Tealdrops has led her to advocate before Congressional leaders such as Pete Sessions from Texas who, at the time of their meeting, was head of the Opioid Task Force in Congress. Stevens has met with President Trump and Vice President Mike Pence to discuss how we as a community, a nation, and parents can proactively combat what is now considered an epidemic. “I want to get drug testing kits in the hands of parents. If a child thinks they might be drug-tested by their parent at night or randomly, that’s a deterrent. In the days of social media with online bullying, kids have a lot of pressures on top of just being kids,” notes Stevens. Stevens mentions that middle school is really where she intends to focus on educating parents in schools. “I can’t be at every middle school, but I can guarantee you one parent at each middle school in this country has lost a child to opioids. If that one parent can speak to their school about warning signs, how to obtain drug testing kits, we can and will make a difference.”

Stevens is tackling this epidemic head-on from another perspective as well. She has become an addiction research graduate student at Wake Forest University. “I’m very interested in how the brain works and is affected,” she mentions. “I have seen signs from Victoria along the way to encourage me to continue fighting to help other families.” Stevens’ journey to help other families has landed her appointments to the North Carolina Department of Health and Human Services, positions on the State Board for Consumer and Family Advisory Committee, spend time on the Forsyth County Opioid Task Force, opportunities to moderate and appear on expert Opioid Panels. Stevens’ collaborated with Nicole Ducouer with WXII to receive an Emmy Award for “State of Addiction” at the 33rd National Emmy’s in February 2019.

“I really have tried to model Tealdrops much like Susan G. Komen’s model — which is prevention is key. I also want to raise funds and awareness to put drug testing kits in the hands of parents,” explains Stevens. She will be doing just that on Sept. 21 at the Lewisville Square from 3-7 p.m. She will be hosting a fundraiser of which the proceeds raised will fund drug-testing for parents who want to have the ability to screen their children. You can find Susan at Tealdrops.org or on social media @Tealdrops_org.

As President Trump said to Stevens in his letter to her on March 19, “I admire how you have helped others and honored Victoria’s memory by raising awareness about addiction. I pray the cherished memories you shared together will serve as a source of comfort and strength.” Our neighbor has truly honored her daughter’s memory by making sure other families will not have to go their journey alone and with the same tragic consequences.