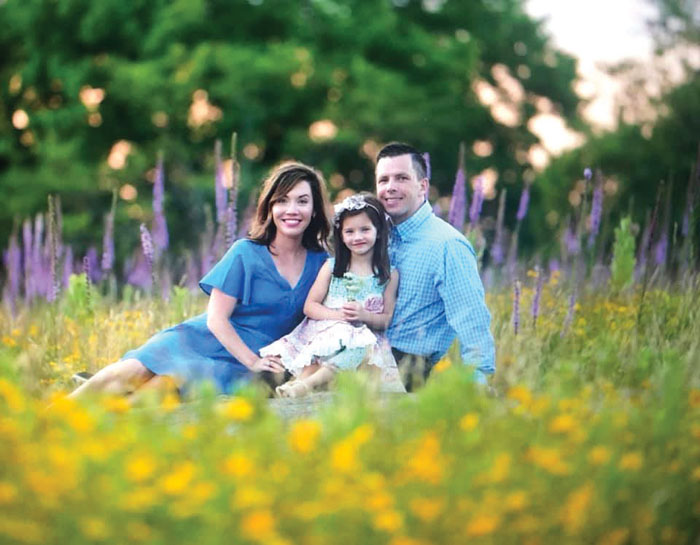 Aaron Berlin with his wife, Krista, and daughter Lexie Grace.

Aaron Berlin’s earliest childhood memories involve all things Demon Deacon at Wake Forest University. “I remember enjoying going to class with my mom who was an undergraduate at Wake. I was 3 and would draw pictures for the athletes in her class. They would always sign my pictures for me, and I had no clue who they were, and they were probably used to signing things for other kids. For me, as a kid, I just thought they might like my artwork.” Berlin’s father was also in the law school program at Wake.  Consequently, Kitchen dormitory came to be considered home. “I remember my bedroom was actually in the closet. So when we moved to our first real home — they couldn’t find me one afternoon. It was because I was playing in the closet — just what I had been used to as a little kid,” joked Berlin.

Berlin found his passion for sports (such as basketball, as an example), from an early age. He played for the competitive All-Stars basketball program and made lifelong friends. “I attended Moore Elementary up until third grade. My mom got a position teaching music at Forsyth Country Day School. The year after, I switched schools. Sports were a great way to stay in touch with my friends from public school and play sports with kids at my new one,” notes Berlin. “I think sports are so beneficial for kids. You become like family. The amount of diversity is similar to what you experience throughout life. All great things.”

Berlin also enjoyed being big brother to Mark, born 9½ years after Aaron during his childhood. “I remember changing his diapers. Because of our age difference, we didn’t fight over sharing clothes or toys. I tried to fulfill more of a mentor and big brother role. We have always been very close,” reflects Berlin.

When it came time for Berlin to choose which college he would attend, having a close family became a factor and influenced his decision to remain in North Carolina. Berlin decided on the University of North Carolina at Asheville. However, it wasn’t long into his freshman year before he began to reconsider whether he wanted to stay in the mountain climate. “I remember distinctly one day in January or February, it was 34 degrees outside. It was raining with the water coming at you sideways. I knew in that moment I needed to transfer,” recalls Berlin.

However, Berlin’s next academic step was temporarily put on hold.  Other experiences were waiting for him. The Church of Jesus Christ of Latter-day Saints’ missionary program was a priority to Berlin that would take him to Anaheim, California. “It was really interesting out there. It was a completely different dynamic of people. Missionary groups had to know at least seven different languages to communicate within the various communities. All the parents didn’t speak English, but the kids did. I really got a deep appreciation for the Polynesian culture,” reflects Berlin. “They were incredibly generous and kind. But they were absolute warriors whenever competing in a sporting event.”

After Berlin completed his mission trip, he resumed his undergraduate studies at Wake Forest in 2003. “It’s funny, they sent me a welcome packet with a list of all the majors and descriptions of them. I couldn’t find one major that I thought would be of interest to me and applicable in the real world at first glance. I went back and looked again and was drawn to communication,” reveals Berlin. Perhaps his love of words was inspired by gifts he received as a child. “My dad always bought me a thought-provoking book each Christmas. He has always been a big proponent of reading, which I appreciate. I knew I wanted to love whatever profession I chose.”

With his major selected, Berlin enjoyed other aspects of his experience at Wake outside of the classroom. “I was a student manager for the basketball team when Chris Paul was there,” remembers Berlin. “Getting to learn from Skip Prosser was an invaluable life experience. He was probably one of the smartest and most amazing people I have ever met. He knew how to motivate the students and relate to them. He came into Wake and generated a fan base like I’ve never seen. Win or lose, the students respected and related to him. He was big into students succeeding in the classroom. He started tie-dye nation. It was a really sad day when he passed away for me.”

Another life-changing event that occurred during Berlin’s college years was when he met his future wife Krista. “It’s ironic because basketball was such a part of my life, but we actually met on the basketball court at our church,” smiles Berlin. “I got the courage to ask her if she would like to hang out some time. I was lucky that she said yes.” Krista and Aaron dated for two years before they got married in 2006.

Although Berlin had decided on his lifelong partner, like many undergraduates, Berlin still struggled when it came time to make a specific decision about a future career choice. “My dad asked me if I had considered going to law school. I had considered it, but only if I could go to Wake,” explains Berlin. After taking a year off to work, Berlin made his vision a reality when he applied and was accepted into Wake Forest’s School of Law. “My dad recommended interning at the district attorney’s office after my first year. It was a great experience seeing how much they help keep the community safe. David Hall was such a pivotal mentor,” recalls Berlin. Berlin also interned with another superior court judge. Since then, he has never looked back.

Berlin’s internships ultimately helped to show him which area of the law in which he might be most interested in pursuing and how he might better serve people.

“I have worked as a domestic violence prosecutor, and on impaired driving cases, misdemeanor cases (including juveniles), felony, and drug cases.” Currently, Berlin’s experience is also put to use working for the North Carolina Conference of District Attorneys where he helps other district attorneys throughout the state as a valuable resource and sounding board when needed. Whether he’s training younger prosecutors or aiding on a complex case, or providing closure to families of victims in impaired homicide cases in Forsyth County, Berlin finds meaning in making a difference and keeping the community safe.

Making our community safe took on an even greater nuance for Berlin when he and Krista welcomed Lexie Grace into their family. “Being a dad changes your perspective on what things are important and what things just aren’t,” reflects Berlin. “You realize that kids watch your every move.” It isn’t lost on Berlin how much his close relationship with his daughter means to him. “She loves her dad, but definitely is just like her mom. She can light up a room.”

Berlin balances his role as a father, husband and lawyer by setting a healthy example for his daughter. “I started taking cycle classes at the Robinhood YMCA and was convinced to start teaching,” notes Berlin. “It’s a great group of folks out there, and it’s fun to exercise with them.” Berlin teaches at minimum once a week, and some days more depending on his schedule.

Berlin’s schedule is also impacted by another position he has taken. When he was nominated to serve as the chairman of the Forsyth County Republican Party in March 2019, he agreed to take on the job. The youngest chairman in the history of Forsyth County, Berlin felt it was important to exemplify what he and Krista try to teach their daughter about being a leader. “I’ve had conversations with Lexie about why it’s important to be a leader instead of a follower. I know she’s watching. I know she’s taking it in,” reveals Berlin.

Our neighbor has never been scared to take on challenges that require hard work. He also has made sure that while doing so, he treats people with the utmost respect, as the Golden Rule states, “Do unto others as you would have them do unto you.”