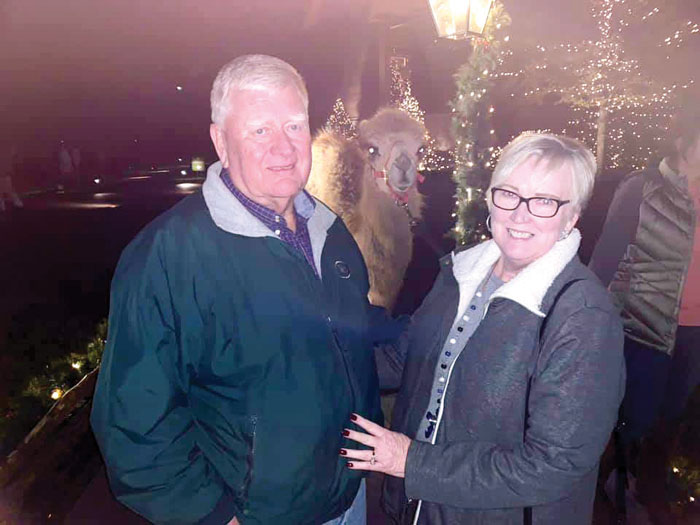 Vicky Denny with her husband, Norman.

Vicky Denny has spent her entire life living in North Carolina with family. Raised in Kernersville, she and her sister were the only girls in the family and on her block. “I was a tomboy. If you didn’t play sports, you were kind of stuck,” she joked. Always playing outdoors with her cousins, with whom she was incredibly close, she relished having a source of entertainment. “Sports for girls weren’t like they are today. It wasn’t the cool thing to do. I played the clarinet in the band, which I really enjoyed,” mentions Denny.

After high school, Denny thought she would go to Appalachian State University (ASU) to become a teacher. Fate had a different plan in mind for Denny. She met her future husband, Norman, between her freshman and sophomore years of college. “I knew right away,” Vicky notes. “Norman is very methodical. I had to wait him out,” she laughs. “Our friends say that we are the odd couple because I love doing things at the spur of the moment.”

Denny’s flexible outlook on life made leaving ASU palatable to be closer to Norman in Clemmons. She studied accounting at the Winston-Salem Business College. “When I said yes to marry Norman on New Year’s Eve in 1971, he shortly after was offered a job that would take him to Greece. Growing up in such a close family, I was going to have to leave all of them behind. I knew I would do it to be with Norman. I remember calling him while he was over there. It wasn’t easy. Not like calling someone overseas is today,” reflects Denny.

While Norman was in Greece, Vicky was planning their wedding. However, they had to change the original date because they soon learned due to political climate of the country, they wouldn’t be making it their permanent residence. The Dennys were married in 1973.

The newlywed continued working at her job for Greenfield Farm and Garden managing their books. “They also had me working out on the floor,” recalls Denny. “I was the city girl working with seasoned farmers. Mr. Greenfield told me to keep my ears open and read books. I was only 20 years old, I know they saw me as a kid.” Denny worked hard to earn their respect by learning the ins and outs of tobacco farming from the different types of seeds, how much fertilizer was needed, and how to care for their plant beds. “When people are different you can really learn a lot if you listen,” mentions Denny.

Denny’s willingness to learn and tackle anything her way allowed her to always land on her feet professionally. She spent a good part of her career with then R.J. Reynolds Tobacco in various departments. She also welcomed another role as mother, in 1976 to son, Bryan, and again with Richard in 1980. “Some of the best times of my life were following our kids, doing the things they wanted to do,” reminisces Denny.

Juggling parenthood and professional life, Denny found herself spending most of her time at the credit union which is now known as Allegacy Federal Credit Union. “I did everything there from the receptionist all the way up to the vice president of banking operations. It was a wonderful career that was more like being part of family than anything else,” reflects Denny. What Denny enjoyed most was helping find ways to become more efficient for both the credit union and benefit the customer from a technology standpoint. Denny was always willing to learn new things, and never comfortable with status quo.

Denny’s go-getter mentality is probably the reason her retirement wasn’t quite as successful as originally planned. Instead of relaxing, she decided to consult for several years after receiving calls from various credit unions requesting her expertise. For several years, Denny continued consulting, before realizing it was time to make life solely about faith, family, friends, and helping others.

These days, Denny is extremely passionate about her involvement at Clemmons First Baptist Church. She also has become involved with Dress for Success, an organization that empowers women to achieve economic independence “I love giving women a chance to improve themselves. It starts with a suit, but it’s much deeper than a suit. It helps a woman go into business, help her family, and show her daughter she can do things. Just because your past can’t be wonderful doesn’t mean your future can’t be wonderful. It allows you to be the best you that you can be,” describes Denny.

Denny also receives great joy from her grandchildren who live several hours away. When not soaking up their milestones, Norman and Vicky can be found cheering on the pack at North Carolina State University. They also ignited their love for travel after football season is over. “We are at the age where we never know what our health is going to be like,” notes Denny on their willingness to take on new adventures and not hold back.

Our neighbor reminds us that we should never give up our quest for knowledge on the journey of life.  As Walt Disney once reflected, “We keep moving forward, opening new doors, and doing new things, because we’re curious and curiosity keeps leadings us down new paths.”