When baby comes early? A NICU provider has been there 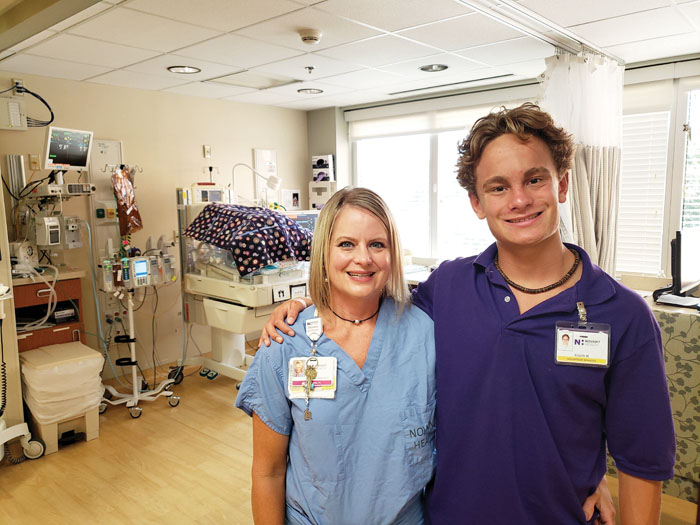 Tiffany Martin and her son, Kadin

The seasoned neonatal intensive care unit (NICU) provider at Novant Health Forsyth Medical Center, had seen many other mothers face the same moment. But now, for the first time, she truly understood what they were going through.

Today, she credits “the scariest moment in her life,” as the defining point in her career. “It made me a better mom and a more compassionate PA,” she said.

It could be said that Martin grew up in a barn in Blacksburg, Virginia. After school, she would take the bus to the stable to ride horses late into the evening or until her family came and picked her up.

“Dad was a veterinarian,” she said. “He let me assist with the animals when to when it came to wound cleaning and stitching.”

Martin rode horses on the national appaloosa circuit for 15 years until her dad said it was time to make a choice. She could either continue to show horses, or she could go to college. She decided to follow in her father’s footsteps and go into the medical field.

After completing her undergraduate degree at Virginia Tech, Martin enrolled in the Wake Forest School of Medicine Physician Assistant Program. As fate would have it, she ran into a last-minute scheduling conflict and found herself in a clinical rotation in the NICU at Forsyth Medical Center.

“I remember thinking, I don’t even like babies,” she said. “I didn’t like to baby-sit and I didn’t like kids in general. But, everything changed after my first shift. I fell in love and I found my place.”

She went on to complete two clinical rotations and an internship in the NICU before she was offered a job in the unit. “I decided I enjoyed being around babies after all,” she joked. “Especially, NICU babies because there is a whole lot of science that goes into taking care of premature babies.”

For love and family

While in school, Martin met her future husband, Jeff, who was also studying to become a physician assistant. The couple graduated together in 1999 and married in 2002. A year later, they were expecting and eventually settled in Clemmons.

“I was so happy,” she said. “I remember my mom came down to help me paint the nursery. But I never made it to the birthing classes.”

Early on, it was determined that Martin’s blood pressure was too high. High blood pressure during pregnancy can increase the risk of seizures, stroke, heart and kidney disease. In Martin’s case, it led to preeclampsia. In severe cases, if not treated, preeclampsia can cause blood cell and platelet dysfunction, impaired liver and kidney function, and increased risk for seizures. Ultimately, the curative treatment of preeclampsia is the delivery of the infant.

With the baby at risk of not getting enough nutrients and oxygen, Martin was put on blood pressure medication and eventually confined to bed rest.

“At 29 weeks, I remember my doctor telling me that I needed to go ahead and have my baby,” she said. “If we waited any longer, my life and my baby’s life were both at risk.”

Martin was relieved to be having her baby at Forsyth Medical Center, where she knew what to expect.

“I had an advantage in that I personally knew the people that worked in the NICU. These are my people,” she said. “I knew that they would take good care of my baby. But, as a provider, the scary part was that I also knew everything that could go wrong.”

A relatively healthy Kadin Blake Martin entered the world 11 weeks early at 7:19 p.m. on Aug. 18, 2003. He weighed just 2 pounds and 2 ounces. To everyone’s delight, after a 36-day stint in the NICU which included a baby shower thrown by her co-workers, Kadin went home.

Now in her 20th year in the NICU, Martin still gets choked up when she shares her story.

“It was a defining moment in my life,” she said. “It made me a more compassionate provider. It also instilled in me a responsibility to encourage new parents today. The NICU is a hard place to bond with your baby. And new moms often blame themselves for early deliveries. When they’re scared, I share that I’ve been where they are, I have felt what they’re feeling and that in times like these, faith is so important. It is sometimes the only thing that gets you from one day to the next.”

Today, the NICU is an advanced 56-bed unit at Forsyth Medical Center. It is well-equipped with top technology and a team of highly-trained and experienced providers that care just as much as Martin.

Kadin, which means “friend” in Arabic, is now a rising sophomore at West Forsyth High School. He is an honor roll student, a black belt in Taekwondo and he competes on the cross-country and track teams. He’s also a junior volunteer at Forsyth Medical Center and recently completed his Eagle Scout service project.

Inspired by his own birth story, Kadin partnered with St. Timothy’s Episcopal Church in Winston-Salem to help build an entry way for their new burial ground for unclaimed babies that had died at the hospital. This burial site also supports families that cannot afford to pay for burial expenses.

“The idea was definitely influenced by my own experience,” he said. “When your family has been in that situation, it opens your eyes to others who may be hurting. I am very proud of the work my mom does as a provider in the NICU, but to me, she will always just be mom. I wouldn’t be where I am today if it wasn’t for her.”

After 20 years of service, Martin said, “I’m not sure my goal today is any different than the day I started. I love these babies and I love their parents. My experience just opened my heart to them even more.”

If you are expecting the newest member of your family to arrive a little bit early, you can trust that the neonatal intensive care unit (NICU), will do everything possible to take care of you and your baby. The maternity services offered at Novant Health Forsyth Medical Center include high-quality care before, during and after your delivery.