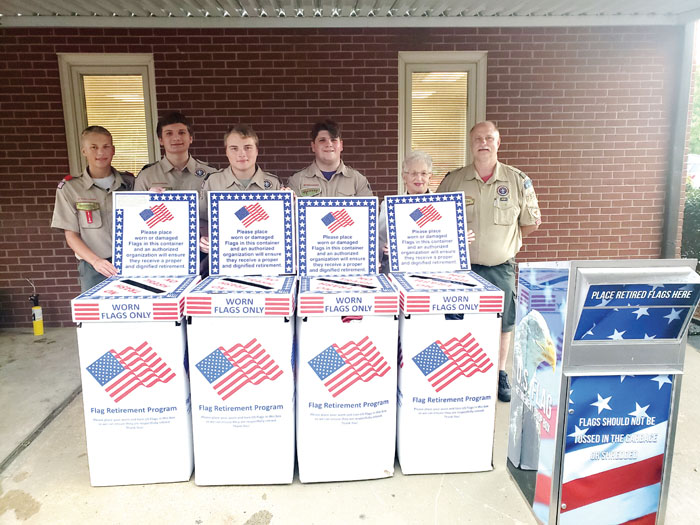 Achieving excellence in a given endeavor is a milestone that many do not accomplish. It takes a dedication and perseverance that pushes one to be their best and always do their best. To do that as a youth is not a small task. It takes a maturity and determination that many adults have trouble reaching. In Scouting, that excellence is represented in the form of the honor of the Eagle Scout rank. And it is quite an exclusive membership.

Achieving this prestigious honor is a task that involves hard work, but also some creativity. Scouts must come up with an Eagle Scout project and complete it before turning 18. The idea of the project is to give the Scout the opportunity to demonstrate leadership of others while performing a project for the benefit of his/her community. This past week, a Lewisville Scout took a major step in achieving his Eagle Scout rank at his Eagle Scout project dedication ceremony.

Michael Semones is 17 and a student Ronald Reagan High School in Pfafftown, and this past Thursday, presented his project in a dedication ceremony. “My Eagle project was collecting flags from the town of Lewisville and having a flag retirement ceremony. I also dedicated a flag dropoff box to the town of Lewisville,” says Semones.

The project dedication was only the next step in a process that has taken Michael on a 12-year journey. “I started as a Cub Scout and earned my Arrow of Light, then right after I bridged over to Boy Scouts (Troop 752),” he says. In talking about his Scouting career, it becomes obvious of his love for the program. “The two things that I mostly love about Scouting is seeing things that a lot of people don’t get to see and being around people that will help you out no matter what and that will always be there for you,” Semones explains.

“I’ve earned 29 merit badges. Now that I’m finished with my Eagle project, I’m looking to achieve what will probably be my biggest achievement of my life, my Eagle (rank),” he continues. This next step will be a long application that will result in an interview by a Scout council.

Semones’ work on his project and his Scouting career is certainly admirable, and the results of this work is close to putting him in pretty special company. The honor has been earned in the past by such well-known names as director Michael Moore, Olympic track star Willie Banks, the founder of Walmart Sam Walton, and perhaps most notably, the first man on the moon, astronaut Neil Armstrong. That certainly put Michael Semones in a unique and honored club.

The dedication ceremony, attended by Rep. Virginia Foxx, was a big step in the ultimate goal of young Michael Semones. Through years of hard work, he has learned the value of never giving up and working diligently. The results are a young man who is not only ready to earn his Eagle rank, but also a great example of how good leadership is developed. With that in place, Michel Semones is not only ready for his Eagle, but in all reality, anything life can throw at him. After all, he will certainly “be prepared.”

Documentary on youth stress and anxiety coming to Clemmons