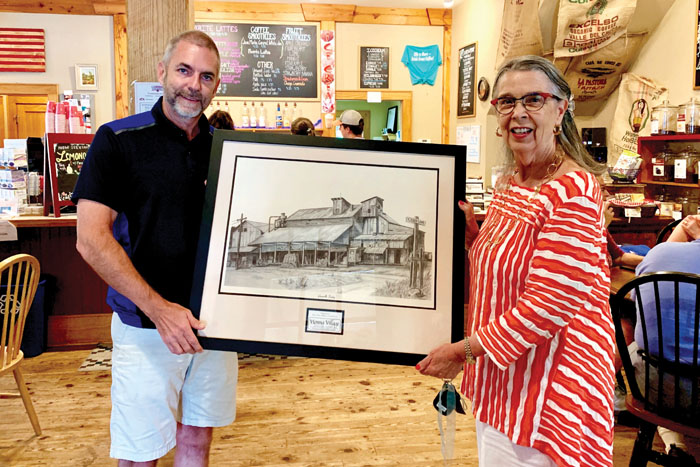 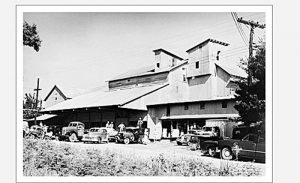 A photo showing the Lewisville Roller Mill in the 1940s

By Cheri Malek
Special to the Clemmons Courier

Vienna Village Assisted Living residents, friends and families enjoy seeing the eclectic collection of art and antiques that adorn the halls there.

Vera McAllister’s family was no exception.

While visiting soon after she moved in on April 1, her daughter-in-law, Carol McAllister, noticed a framed sketch print hanging near her room. The print, titled “Lewisville Sunday” by Joey Henson dated 1984, depicted the old “Roller Mill” in Lewisville as it looked long ago.

Coincidentally, Carol’s son, Jeff Blair, had recently purchased the Coffee Mill, a coffee shop now in the old roller mill building. Thinking that the print would not only be a nice gift for her son, but also a wonderful addition to his décor in the shop, she asked the owner of Vienna Village, Ann Lowe, if she could purchase the print from Ann.

Not particularly wanting to part with the historic print, but desiring to please McAllister, Lowe found another copy of the print through an online search. She ordered the print, had the print framed and matted and presented it to Jeff and his wife Patty as a gift. 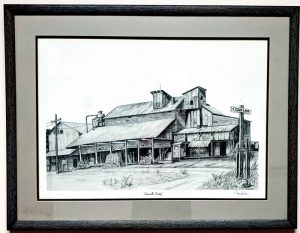 Vienna Village has a long-standing history in the Lewisville community and takes pride in supporting locally owned businesses. Jeff Blair had patronized the Coffee Mill for a while before purchasing the business in April from Andy Blair (no relation) who had decided to retire.

“I fell in love with the vibe,” he said. Jeff’s grandfather had played checkers there when it was still operating as the mill and the building became the unofficial town “centerpiece.” So much so that when Lewisville incorporated, the town logo depicts an image of the old roller mill.

Owning a shop like this had been a life-long dream for Blair, a nutritionist by trade. He has created a cozy, friendly environment where customers of all ages can relax in the chairs, socialize, and take advantage of the free Wi-Fi all while enjoying a cup of coffee, smoothie or other treat.

Built by the “JP” Sprinkle family in 1910, the mill was originally called Fairview Roller Mills. Fielden Jennings Sr. purchased the mill in 1925 and changed the name to Lewisville Roller Mills. For many years, farmers brought their grain to either sell or have it ground into feed for their animals.

Lowe also remembers purchasing feed for her pigs at the mill in the 1970s. Mr. and Mrs. Jennings’ youngest child was Grace. She also worked in the mill for many years and her name can be found among the details of the drawing. In 1984, the year the drawing was made, the Lewisville Roller Mill ceased operations and the building was sold to Tom Fowler, a local developer. Several other businesses now rent space in the building alongside the Coffee Mill.

Lewisville is a close-knit community comprised of residents and locally owned businesses who are both proud of the town’s history and excited about its future. It is evident that the owners of The Coffee Mill want their shop to be a welcoming, hometown gathering place and that goal aligns with Vienna Village’s 54 years of caring for residents in this community.