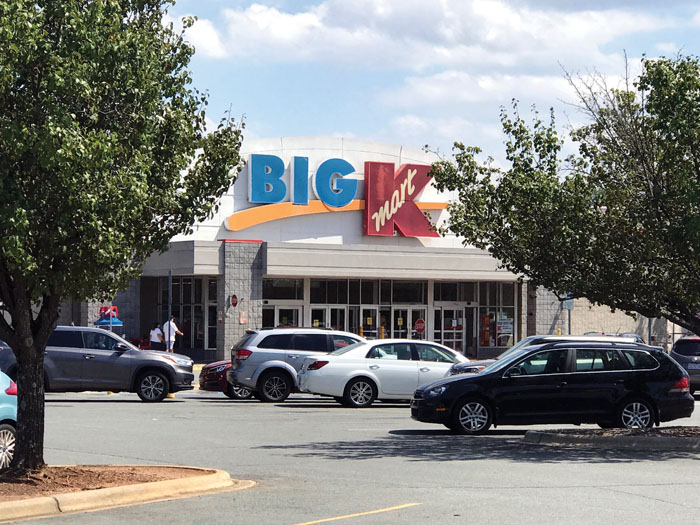 The Clemmons Kmart will be closing its doors before the end of the year. Photo by Jim Buice, for the Clemmons Courier

The last remaining Kmart in the Triad — located in the heart of the busy Lewisville-Clemmons Road business district in Clemmons — will be closing its doors before the end of the year.

Kmart spokesman Larry Costello confirmed the news Monday, through a statement to the Courier, after media reports started circulating last week that included the Clemmons Big Kmart as being among the next wave of the company’s store closings in December.

“After careful review, we have made the difficult but necessary decision to close the Kmart store in Clemmons, North Carolina,” he said. “The liquidation sale is expected to begin in mid-September and the store is planned to close by mid-December. We encourage customers to continue shopping on Kmart.com for all their product needs.”

A couple of local employees, who didn’t provided their names, said they weren’t surprised but sad to learn the longtime local retail anchor will soon join the list of Kmart stores to close. The closest Kmart for Triad shoppers going forward will be in Raleigh.

The Clemmons Kmart also contains a Little Caesars restaurant site, which will close in October.

Many speculated it was only a matter of time — when the 10.49-acre tract at 2455 Market Center Drive, where the store is located and also includes the large parking lot and frontage off Lewisville-Clemmons Road, was sold in June — before there might be changes with the site.

The property was sold for $5.5 million to HRP Clemmons LLC, an affiliate of Harbour Retail Partners of Atlanta and Wrightsville Beach, which states its real estate focus is on acquiring and developing commercial retail properties with a strategy that includes the acquisition of existing value-add centers.

It was the second time the property has been sold in the last six years and is part of a prime area targeted by Clemmons for the Market Center Drive road project, which will run parallel to Lewisville-Clemmons Road on the east side.

Sears Holdings, the company that long operated Sears and Kmart stores, filed for Chapter 11 bankruptcy protection in 2018, and then former CEO Eddie Lampert struck a deal earlier this year to buy Sears assets out of bankruptcy and keep hundreds of stores open under a new entity, Transformco.

Just weeks after announcing in early August that the company would close a number of Sears and Kmart locations in October, word came down that nearly 100 additional stores — including the Clemmons Kmart — would be shuttering their doors by December or sooner.

Mayor John Wait said that Clemmons would work with the property owners and do what it could to make the site the best it can be.

“One of the things with Kmart is that it just happens to be part of Sears, and that company just hasn’t done very well, and there’s not a lot we can do at the village level,” Wait said. “We’ve made contact with the property owners and are very encouraged and hopeful we’ll have a good project there.”