“Just one of the guys:” Megan Peters relishing opportunity as a kicker for the West Forsyth football team 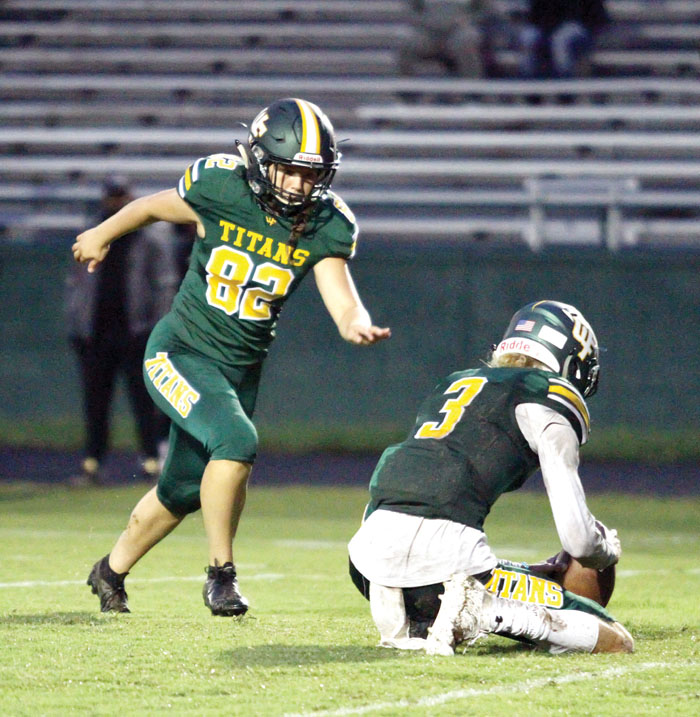 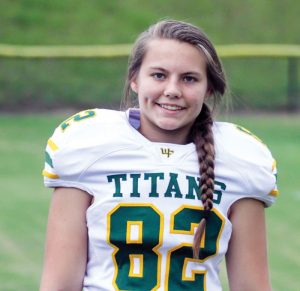 The ball is snapped. The holder catches and places the ball perfectly — laces out — and the kicker approaches the ball with gusto, sending it soaring through the middle of the uprights with a mighty strike of the right foot.

The offensive line is quick to celebrate the accomplishment with the kicker. The coaching staff and players on the sidelines are jumping up and down in celebration.

The kicker heads for the sidelines with her ponytail bouncing along the back of her shoulder pads and a smile on her face.

Don’t let the ponytail fool you.

Megan Peters is just one of the guys for the West Forsyth football team and she is taking advantage of her unique opportunity to contribute to the team.

Peters, a junior, also played varsity soccer for the Titans as a freshman and a sophomore. She got an itch to try kicking from her personal trainer, Dave McConnell, who is a former football coach at West.

“He told me I should give it a try because he knew they might be looking for a kicker this season,” Peters said. “The idea kind of came about over the summer. I had never really kicked before, maybe a few times before practice started. I thought ‘why not’ and decided I was going to give it a try. I had told Coach (Adrian) Snow I was thinking about it but didn’t know if he would remember or not.”

Snow did remember — and is happy that Peters took the leap.

“She has been great,” Snow said. “She loves to compete. She wants to get better. We’re happy to have her out here with us. Her teammates love having her and are happy for her success. She’s really just one of them. And she keeps telling me she wants to tackle someone before she graduates. How can you not love that kind of attitude?”

Peters has delivered when her opportunities come. She has kicked in the second half of every game — Jaylen James has kicked during the first half and Shane Jarvis handles the kickoffs — and has missed just one extra point attempt. She made both her tries against Greensboro Dudley, one against Mooresville, 1 of 2 against North Mecklenburg, and added two more last week against High Point Central — all convincing wins.

The first extra point she made against Dudley will always stand out.

“I knew I was going to get at least one kick that night,” Peters said. “Coach (Snow) came up to me on sidelines and told me I needed to get ready because the next one was mine. I had to collect myself and get mentally ready. Then I went out there and made it and it was a feeling like I’ve never had before. It felt pretty awesome.”

According to Brad Bovender, one of the Titans’ assistant coaches, Peters’ first extra point against Dudley was the first time a girl scored a point for the West football team in school history. Bovender has been around the program as a spectator, a player, and as a coach since 1987.

“I was on top of the press box when she kicked it and when it went through, I just put my arms straight up in the air as high as I could,” Bovender said. “I saw Snow on the sidelines jumping around. When I went back and watched it on film, everyone was so excited for her. All the linemen came up and patted her on the helmet. It was a cool moment for anyone who has been around this program for a while.”

Peters was just as excited about her accomplishment.

“It was pretty special for me to find out I was the first one to do it,” said Peters, who also scored the game-winning goal for the Titans in a NCHSAA 4-A playoff game in the spring against East Forsyth. They are both special accomplishments in different ways. The only difference was that I knew the feeling about scoring a goal in soccer. I didn’t know how it felt to kick an extra point. It was pretty incredible.”

Bovender first learned about Peters’ interest in kicking when McConnell sent him a video over the summer of her kicking off a tee.

“The ball was at the 40-yard line and she kicked it into the end zone, so it sailed 50 yards,” Bovender said. “Granted, that was without a snap and without anyone rushing, but I knew it was something we could work with. I told (McConnell) to make sure she was at tryouts and had all her paperwork done. She came to that first practice on Aug. 1 and had all her ducks in a row.”

Peters said she showed up for that first day of practice and kept it low-key. She worked on her timing and fundamentals of kicking. It felt somewhat natural given her experience with soccer, which she has been playing for as long as she can remember.

“You try to hit the ball in the same place, and you adjust your hips the same way,” Peters said. “The transition is pretty similar. It’s just a matter of getting the timing down.”

Scott Bilton, the coach of the girls’ soccer team, said he is proud of what Peters is doing.

“Everyone wants to see her succeed because she does things the right way,” Bilton said. “When she told me she was interested in doing this, I encouraged her to do it and most importantly, to have fun. I couldn’t have been prouder of her after that first one went in. It added a lot of excitement to what was already a blowout win (West best Dudley 42-13). Then after the second game, I saw her after she missed one and asked her what happened. And she said ‘all on me. I just missed it.’ That’s the kind of person she is. She wasn’t blaming anyone but herself. She went through a rough spell during soccer in the spring when she wasn’t playing as much. She came to me and told me ‘I’m just a little bit off right now and I have to do better.’ She worked her way into being one of our key players in the last part of the season. That’s who she is.”

Peters gets her own locker room on game nights and for practices. She will get her uniform on in the volleyball locker room and then head to the weight room before warm-ups until she is called into the regular locker room for the pre-game talk.

She eventually wants to go out for kickoffs — not just to kick the ball, but to follow the play.

“I want to tackle someone,” Peters said as a wide grin ran across her face. “That’s the next goal for me. Kickoffs and at least one tackle.”

Bovender said they will start working Peters into the tackling drills by learning the fundamentals.

“We want to be sure she is fundamentally sound before we put her out there for that,” he said. “She’s a tough cookie. It’s been great to have her be a part of this.”

Ultimately, Peters hopes to pursue playing soccer when she gets to college. Her dream is to play at the U.S. Military Academy at West Point.

“Both of my parents are Army veterans and it has been a dream of mine to play soccer there,” Peters said. “Playing football has only given me more confidence in my soccer. I feel like I’ve been more aggressive already for my club team this season and I think I’m a lot stronger. It’s only going to help me out.”