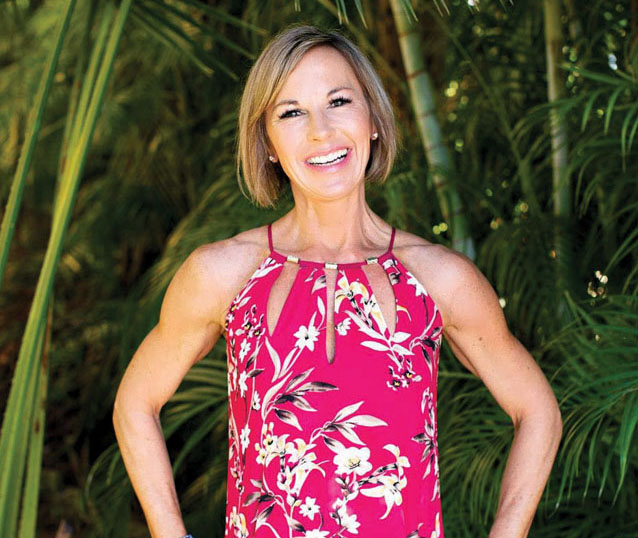 Tara Ballard learned from an early age to take experiences that pushed her outside of her comfort zone, and make them valuable life lessons. Originally born in Canada because of her father’s job in the United States Air Force, Tara moved back to the States as a young child. Tara spent most of her years in the southern states including North Carolina, South Carolina, Georgia and Florida.

“As a kid moving around a lot, it taught me resilience. It was challenging at times because I had to re-establish social groups. Reflecting back on it now, I have a different perspective on how it taught me some great things about adapting,” notes Ballard.

Ballard enjoyed the academic perspective of her schooling regardless of the location. When it came time to choose a college, she was accepted and attended the University of North Carolina at Greensboro. “I thought about being a nurse. I quickly learned that I had no desire to deal with blood or biology class,” laughs Ballard. “I knew I wanted to help people, but not in that way.” After reflection on other interests, education came to mind. “I remember teaching my stuffed animals and loving having my pretend classroom.”

Ballard was not completely convinced that education was the route she would take. “Around the same time, I was grappling with changing majors, my sister was living in Florida and going through a life change too. She had gotten separated from her husband, and it seemed like a good time to go do something different and be near her,” recalls Ballard. “I started taking technology classes at the local community college. I really looked up to my dad’s talents in computer science and technology and was intrigued.”

The genes in Tara’s family were strong with talent for information technology (IT) careers. “I finished my classes and went into network administration as a programmer. I was very lucky to get a job in Jacksonville, Florida as an IT director at a local law firm,” explains Ballard.

Ballard was enjoying her professional successes and found fulfillment in other areas too. “In my early 30s, I started learning more about exercise. I had never really exercised before then, and once I started at the local YMCA I was hooked,” describes Ballard. She also met someone who would share a lot of her same goals and passions at that time too, Nick Jongebloed. “Nick was teaching spin class, and had a lot of the same common interests. We started dating in 2003 and have been ever since,” smiles Ballard. Ballard also started taking exercise to the next level by teaching classes too. “I absolutely fell in love with the teaching element. I taught body pump type classes.  I taught metabolic effect too which was very exciting and interesting to me.”

Luckily for Ballard her professional and personal interests were able to move state lines. Ballard had wanted to live near her father who was down in North Carolina. “My mother had passed away in 2006, and my father was living in Winston-Salem. Both Nick and I realized this area would be a great place to live, and I could be near my dad,” explains Ballard. “My company was very flexible with my keeping my job and working remotely. I was very glad I did because I was able to spend time with my dad before he passed in 2012. My dad was very much my hero, and I looked up to him in so many ways.”

Tara and Nick have really immersed themselves in their new home and community. Ballard is no longer teaching classes in a gym setting but inspires women, primarily in their 40s and 50s with her Prime Life Fit company. “It’s mostly on Instagram and Facebook,” notes Ballard. “I try to teach balance and moderation for women whose bodies are going through changes. I really geek out on the science behind how we should treat our bodies.” With almost 8,000 followers, Ballard enjoys motivating women who are committed to getting healthy not just for aesthetic purposes, but to live longer lives as well. “Quick fixes are not sustainable. It’s really a three-pronged approach: nutrition, exercise and mindset.” Ballard encourages people to take back their power, and let the research help guide the way. Ballard has clients here in the Triad, but also as far reaching as Alaska.

Another way that Ballard keeps her health is through giving back to her community. She and Nick have been very active in various animal rescue groups since the 1990s. They are fosters to cats and dogs. They also help fundraise to provide for local rescue organizations. One such fundraising effort is by selling eggs produced by their chickens and donating all proceeds. Nick and Tara also get calls from rescue groups that need to have an animal transported from one part of North Carolina to another (usually to their forever home). “We love helping, my dad was very much an animal rescuer,” remembers Ballard. She and Nick try to assist rescues when they can with any aspect of their mission. “We’ve also helped with trapping and releasing feral cat colonies,” explains Ballard. One unspayed female and one unneutered male can produce over 11,606,077 cats and kittens in nine years. “Helping with these colonies helps prevent so many unwanted litters,” mentions Ballard.

Our neighbor has found a way to round out her life passions and keep focused on what truly matters. As Abraham Lincoln noted, “In the end, it’s not the years in your life that count. It’s the life in your years.”