Titans shut down Spartans to improve to 5-0 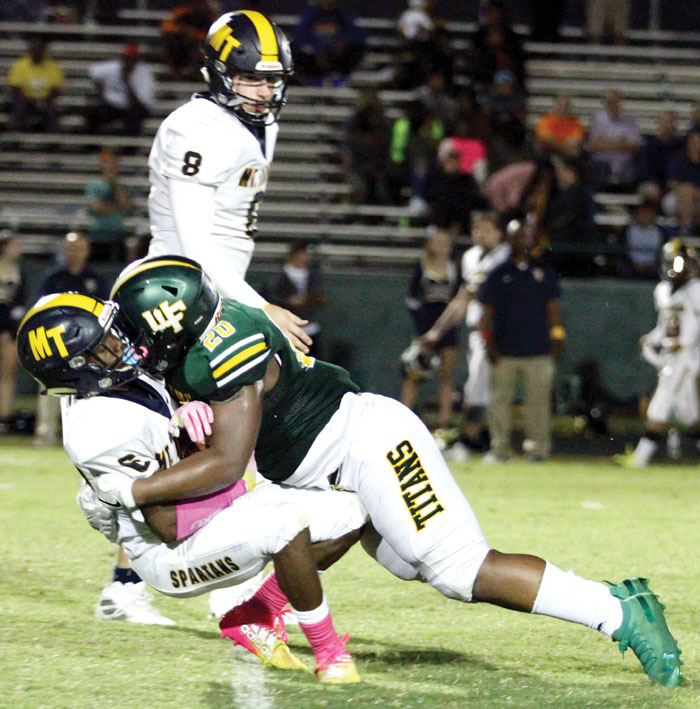 Put another “W” in the standings for the West Forsyth football team.

West shut down and then shut out visiting Mount Tabor last Friday in a nonconference matchup at Jerry Peoples Stadium with a 28-0 win against its former Central Piedmont 4-A Conference rival to improve to 5-0.

It was the second straight shutout for the Titans, who have surrendered 33 points in five games this season.

This one wasn’t easy, though.

Mount Tabor did just enough to keep West off-balance with its two-quarterback system that the two teams played to a scoreless tie in the first half.

The Spartans’ defense also played well, limiting the Titans to just 91 yards of offense in the first half and only one drive that ended in Mount Tabor territory.

“We just didn’t get a lot of rhythm because they pinned us,” Coach Adrian Snow said. “It was just a field-position situation. We’ve been able to run a bunch of plays in earlier games, but this was a different test. We knew defensively what they had, and they made some adjustments offensively, too. This was a good test for us. They’re a good football team and they will be hard to beat in their league.”

G’mone Wilson helped to open the floodgates in the third quarter when he took a sweep left on the second play of the half and found plenty of running room down the sideline on a 55-yard scoring run. Jaylen James’ extra point gave West a 7-0 lead it would never relinquish.

“Anytime we do stuff like that, I think it kind of relaxes us a little bit and they aren’t so bound up about what’s going on,” Snow said. “Now, they realize that we’re OK and let’s go play and I think you could see that after that run. It got us going. The big boys up front don’t get a lot of credit, either. I talked to them at halftime and told them to just keep leaning on them and they were going to break. We knew we would be OK.”

Mount Tabor drove down the field on its opening series of the second half with a 14-play drive that stalled at the West 3-yard line.

On fourth-and-2, Amar Aikens took the handoff and was immediately met by a surging Mack David, a sophomore linebacker, for a 2-yard loss, turning the ball over to West on downs.

“I just knew we needed a stop and I knew who was getting the ball,” David said. “I knew he would be coming to my hole and coach was sending me on a blitz and we executed it perfectly. We went to halftime and just talked about executing better on offense and defense so we could get rolling.”

Snow has been nothing but impressed with David through the first five games — on and off the field.

“Bowing your back like we did on the 3-yard line, that sure does show your character,” Snow said. “He’s an unbelievable player but let me tell you what he’s better at. He’s a better young ‘un than he is a player. He’s such a joy to be around, he’s a joy to coach. Everybody on our team wants to be around Mack David. He’s just one of those kids that’s always got a great smile and he’s always ready to line up and get after somebody, which he did on that play.”

After David’s stop, the Titans poured it on from there.

Wilson tacked on his second touchdown run of the game with a 14-yard burst with 36.7 seconds left in the third quarter that boosted the lead to 14-0.

On West’s first possession of the fourth quarter, quarterback Jalen Ferguson lofted a pass to the endzone that C.J. Graham timed perfectly while leaping high above the Mount Tabor defender to come down with a 23-yard touchdown pass for a 21-0 lead.

The Titans have a bye this week and will play at Greensboro Page on Oct. 4.

“We’ve had some sickness we’ve had to play through and some nicks here and there, nothing too serious, but this comes at a good time,” Snow said. “We’ll give them a couple of days off and then try to keep getting better.”