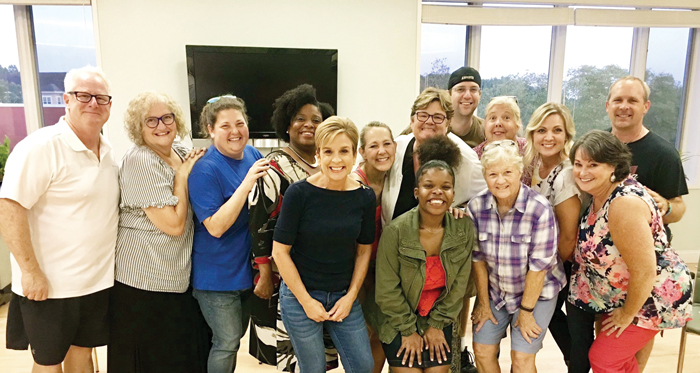 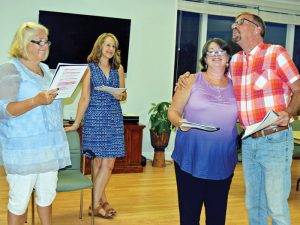 On Oct. 18, a new play will be making its debut at the Historic Broyhill Center in Clemmons, and proceeds from this event will benefit the Clemmons Food Pantry.

The play “Reunion” was written by Clemmons resident Lynn Hall, and will run Oct. 18-20 and 25-27. The performances will be at 7:30 p.m. on Friday and Saturday evenings, with the matinee performances at 3 p.m. both weekends.

Hall was a reporter and news editor for the Clemmons Courier from 1989 until 2002. She left the Courier to become the public information officer for the Town of Lewisville, a job she held until 2016, when she retired. A journalism major from Texas Tech University, Hall worked as a reporter for the City News Bureau, a wire service in Chicago, following graduation and then as a newspaper editor in Columbus, Ohio. She left the news business for corporate communications, working for Ohio State Life Insurance Company and then joining Ashland Oil’s Communications Department where she edited the company’s monthly newsletter for its 30,000 employees. She also wrote for other Ashland publications such as Ashland Now and Valvoline World.

After the family relocated to North Carolina, she went back to work in newspapers, joining the Clemmons Courier staff, while also doing freelance work. For several years, she served as editor for a publication of the Pastoral Care Department at Wake Forest Medical Center.

“I’ve been interested in theatre since high school and became involved in the backstage aspects of community theatre in this area some 20 years ago,” Hall said. “While I’ve written all sorts of things — from magazine articles, to a hymn in the Moravian Hymnal, to a novel, I always had an interest in trying my hand at play writing. This was my first attempt. The first draft was written a number of years ago and I’ve been rewriting ever since. I never imagined it would come to anything, but I was encouraged to stage the play and quite unexpectedly, found someone willing to fund this undertaking.”

Hall said her benefactor has requested anonymity, but she is incredibly grateful for this opportunity.

“My good fortune in this regard is the reason I wanted to see that all proceeds from the production benefit the community. I had a chance to do a story on the Clemmons Food Pantry for the Courier not too long ago and know what a valuable service they provide to the larger community,” she said. “It was the Rotary Club of Clemmons that helped us reach out to the food pantry, and I’m enormously grateful for the support the Rotary has provided, as well as the staff of the food pantry in getting the word out about the play.”

One of the first tasks involved in staging the show was a venue. “I was talking with my producer about ideas and decided to stop by the Historic Broyhill, knowing the old school building has an auditorium. Kristin Johnson met us there and showed us around and it seemed the perfect location,” Hall said. “We hope this will prove a great venue for theatre and that in the future, other productions might be staged there as well.”

“Reunion” involves a group of actors who have come back to take part in a tribute to a community theatre’s artistic director. Since his passing, his widow has been running the theatre and this event will serve as a memorial and also kick off a fundraising initiative for much-needed theatre renovations. The drama involved the renewing of friendships and uncovering of secrets.

“I was incredibly lucky to cast a very talented group of actors,” Hall said. “One of the benefits of being involved in theatre is you are able to meet and work with some amazing people. I had an idea of those I wanted to approach about roles, and am so grateful that so many of them agreed to be a part of this. My good friend, Melissa Peller, whom I’ve worked with on many other productions, agreed to produce the play. Her company, Visualize Consulting, LLC, produces the musicals in the Lewisville town square. Undertaking something like this is daunting, and Melissa has kept me focused. Without the funding and her energy and support, this would never be happening.”

Members of the cast include Sheri Masters, Ted Burcaw, Carol McConnell, Chris Swain, Peggy Dull, Janea Platt, Donovan Fansler, Miles Stanley, Nicole Sheran and Lynn Vogler. “There is role for a television reporter in the play and while I can’t quite believe my good fortune, WXII’s Chief Meteorologist Lanie Pope agreed to play that role. This entire undertaking has truly been a dream come true, and now to have Lanie as part of our cast is almost too good to be true.”

Jacob Peller is stage manager for the show.