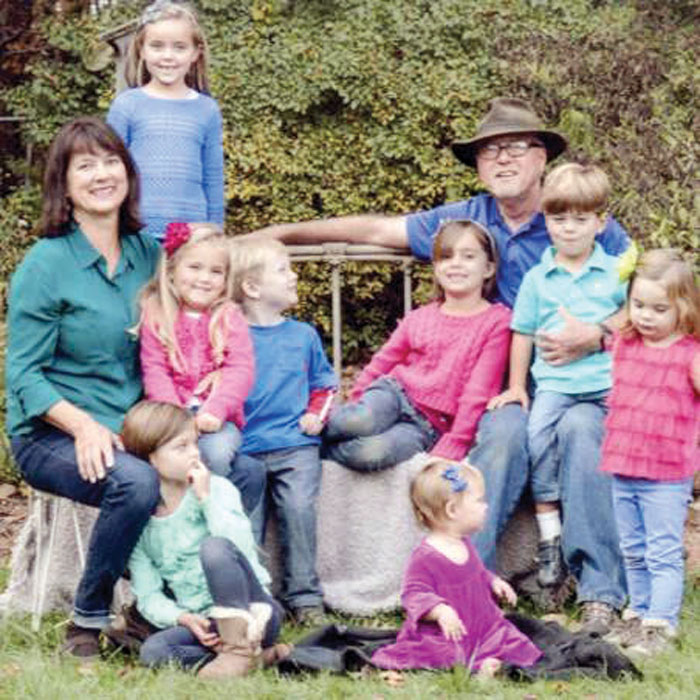 Burke with his wife, Val and their eight grandchildren.

Burke Wilson is a neighbor that learned the necessity of resilience from a young age. At the age of 12, when many of his peers just had school and their social life to worry about, Wilson’s father also insisted that Wilson work at the family business, Wilson Brothers Lumber Company. “I remember one day after dinner, my dad looked at me and told me it was about time to start working,” recalls Wilson. “I was petrified. You had the guys in the suits and ties, and then you had the guys out there doing the real laborious work. I was out there helping those guys. They were a lot older than I was, but I really enjoyed them. They were characters.” Wilson learned the true meaning of hard work as they took in raw lumber and trimmed it up to turn into two-by-fours for building homes. “People weren’t going to Lowe’s or Home Depot back then,” jokes Wilson.

Although he worked hard at the family business while also attending school, he also adapted to his new routine and managed to enjoy other aspects of being a kid. “Everybody played baseball. We had these old wool uniforms. I really enjoyed playing with my friends,” reflects Wilson. During his younger years, Wilson also met his future wife when he was just a freshman in high school. “Val was only in seventh grade when I saw her in the hall in her Northwest cheerleading outfit. I thought to myself, ‘Oh my gosh, I have to meet her,’” reminisces Wilson.

Val and Burke dated off and on until 1973, when they were married. Burke had chosen to attend the University of North Carolina at Chapel Hill, and Val was working for a bank. After 3½ years at Chapel Hill, Burke decided it was time to begin working after getting married to his high school sweetheart. The Wilsons had their first daughter, Ashley, in 1974. “We had a new baby, I was working at the family business, and we moved to Rural Hall,” recalls Wilson. Within two more years, they had their next daughter, Tiffany.

After having been employed at the family business since adolescence, Wilson decided he wanted to try a different line of work. “I tried selling insurance for about six months. My employer was going to let me have a Volkswagen Beetle. I was excited. Needless to say, I didn’t sell one insurance policy in six months. And one night, I got a call that my boss was going to take my car back,” recalls Wilson. “I decided to go back to work for my dad while I figured out our next steps.”

Burke’s father-in-law offered him a different opportunity, however. His father-in-law thought bringing Wilson on board to Sharpe Co. made a lot of sense because business was booming and they needed dependable professionals. “I ended up staying there for 35 years. I started out stocking shelves, and then spent the majority of my time visiting with customers,” explains Wilson.

As Wilson’s role in the family business expanded, he and Val also continued expanding their brood. They added daughters, Brittany in 1978, and Melanie in 1980.  “I really credit Val with raising the girls. We look at our kids today and everything is so fast-paced. It’s just the nature of this society now,” notes Wilson.

Burke remembers with great nostalgia coaching his daughters’ softball teams. Wilson also appreciates the close bond his children have always shared. That bond would prove to be especially critical when Burke’s youngest daughter Melanie became critically ill.  Melanie, who had kept her Shirley Temple dimples and megawatt smile into adulthood, passed away on July 19, 2017. “She had suffered from Crohn’s disease for 20 years. In May of 2017, her doctor diagnosed her with stage IV of small cell carcinoma cancer. I don’t think when they first told us, I realized what that really meant. After six weeks, I started to understand that they meant she wasn’t going to live. They were preparing us for what was going to happen down the road in the near future,” reflects Wilson. “Our last family trip to the mountains, which is a happy place for our family, Melanie was feeling well enough to enjoy it on the 4th of July. Throughout the, trip though, she started feeling pain. I had to drive her back so she could go to the hospital. She was crying a lot. I think she knew. It was the worst car ride of my life.” Whenever Burke remembers his youngest daughter, he can’t help but mention what everyone noticed, “Melanie sure could light up a room. Her dimples helped.”

While the entire Wilson family, as well as extended family members and friends, have tried to honor Melanie’s memory, one way they find joy is through the grandchildren. “I have eight grandchildren. If you ask them what they call me, they would say Papa Cool J because I’m always cutting up with them.” Wilson also enjoys playing guitar, a new talent that emerged at the urging of his longtime friend, Kyle Petty. “I wanted to play songs for my grandkids and make videos. I really enjoy sitting out and playing.”

Wilson has also found fulfillment at the Riverwood Therapeutic Riding Center where children with special needs get to spend time participating in equine-assisted activities. “My childhood buddy Kyle had me come out there to help and I loved it. I could really relate to the children. We have the best time out there,” says Wilson. Wilson will be there helping this coming Saturday, Sept. 28, from 5:30-8:30 p.m. for the annual fundraiser, the Hoof Beat. “It’ll be a great opportunity to raise funds to support this valuable benefit for children featuring the Martha Basset Band. There will be tasty food provided by Salem Kitchen, and you can even see some of the horses that the children get to ride.”

Speaking of rides, it seems pretty clear that we don’t always know what is in store for our figurative journey through life. However, one thing seems for certain, there will always be bumps in the road. How we take them determines what kind of journey we will have. Wilson has taken some pretty bad bumps, one that most parents hope they will never suffer. Amazingly, his resilience has not only kept him going, but heading in a direction that is good for the many children and grandchildren that cross his path.