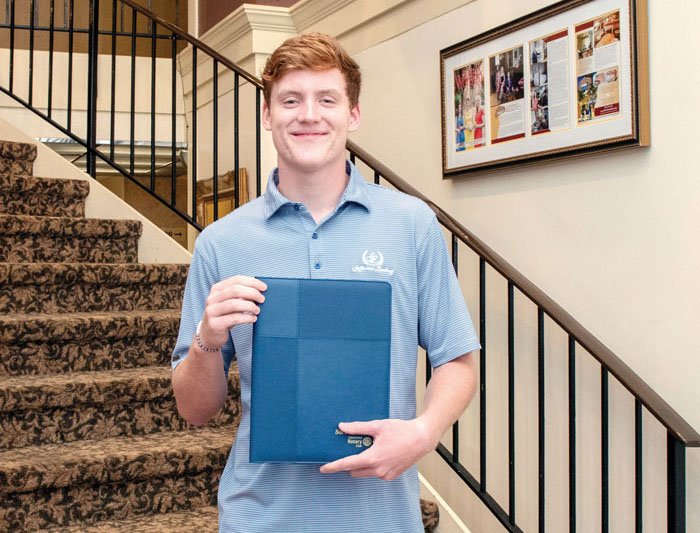 Student of the Month Slade Garraghty

Slade Garraghty was recognized on Sept. 25 as the Rotary Club of Clemmons’ “Student-of-the-Month” for September.

According to West Forsyth High school: “Slade is an all-around fantastic young man. Whether it be his dedication to football or being the first to offer academic tutoring to his peers, Slade has shown himself to be a leader and someone who truly cares about others.”

Slade has been an outstanding academic achiever during his high school career, ranking 48th out of a class of 574, with a GPA of 4.375 and a member of the National Honor Society as well as a Crosby Scholar.

Slade has also received several awards and recognitions to include: All Conference Defensive player in football in ninth, 10th and  11th grades; Max Preps indicates Slade is ranked as the No. 148th football player in the nation and fifth in North Carolina at the position of defensive end/outside linebacker.

Outside of school, Slade is active in the community as a member of Center Grove Baptist Church and member of the youth group at Clemmons First Baptist Church. He has volunteered as a coach for the Forsyth County Broncos football team in youth football, as well as participated in the Hoops for Him Basketball League.

Slade will be attending college this fall and hopes to study engineering at either N.C. State or UNC Charlotte.

The Rotary Club of Clemmons congratulates Slade for his accomplishments and contributions to his school and community.