Titans power past Page to move to 6-0 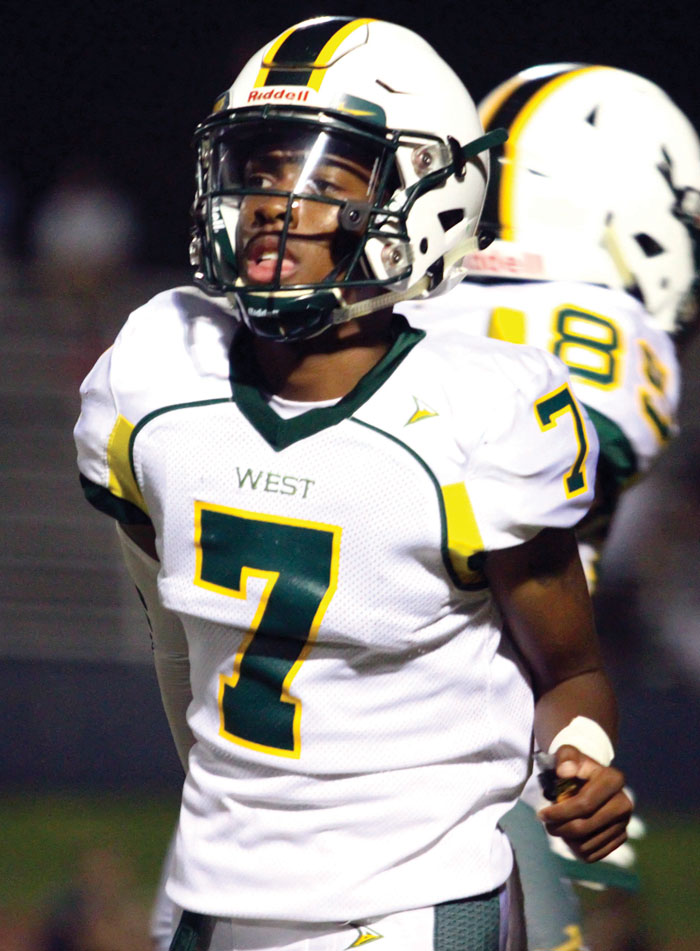 Showdown with East Forsyth on tap Friday in Kernersville

Jalen Ferguson passed for one touchdown and ran for another and G’mone Wilson and Zy Dillard each had rushing touchdowns as visiting West Forsyth powered past Greensboro Page last Friday at Marion Kirby Stadium to remain unbeaten.

The Titans closed out their nonconference schedule with their sixth straight win to set up a showdown against East Forsyth on Friday night in Kernersville.

The West defense, which has allowed just 39 points this season, held Page scoreless until midway through the fourth quarter before the Pirates cracked the scoreboard with two big plays.

After being held scoreless in the opening quarter, Ferguson got the Titans going when he connected with C.J. Graham on a 73-yard touchdown pass early in the second quarter that helped open the floodgates and led to 26 unanswered points, 20 of which came in the second.

Wilson added a 75-yard touchdown run on the Titans’ next possession, and Dillard scored on a 1-yard run with 3:23 left in the first half as West took a 20-0 lead at halftime.

Ferguson completed 9 of 13 passes for 182 yards and Wilson finished with 135 yards on eight carries.

Ferguson’s rushing touchdown came early in the fourth quarter on a 3-yard burst that put West ahead 26-0.

West (6-0) will travel to Kernersville Friday night to take on East Forsyth (6-0) in a battle of unbeatens as both teams will open play in the Central Piedmont 4-A Conference.

The Titans are ranked No. 5 in the latest  4-A MaxPreps poll, with the Eagles just behind at No. 6.

East defeated West 16-10 at Jerry Peoples Stadium last season, the closest game the Eagles had on their run to an undefeated season and the NCHSAA 4-A state championship.

Will Atkins commits to run at Duke

Will Atkins, a senior runner for the cross country and indoor and outdoor track teams, committed to run at Duke last week.

Atkins won the NCHSAA 4-A indoor state championship in the 1,000 in February by setting a new school record and finished 14th in the 4-A state cross country championships last November, where he was an all-region and all-conference performer last season.

Atkins also holds the school record in the 800, where he won conference and regional championships last season and was runner up at the outdoor state championship.

Atkins was also recognized as the West Forsyth Male Athlete of the Year for the 2018-19 school year.

Pennington to be inducted into the Parkland Hall of Fame

Pennington guided the Mustangs to their only state basketball championship in 1999 when the Parkland beat West Rowan 101-83 in the NCHSAA 4-A title game.

He was also the recipient of the Homer Thompson “Eight Who Make a Difference Award” in 2002, which is named in honor of the late Homer Thompson, a former football coach and athletic director at Parkland.