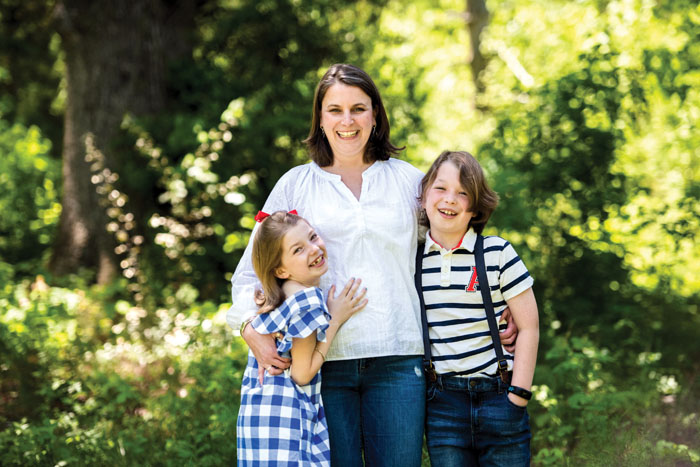 Jennifer del Valle has never shied away from trying new things or going outside of her comfort zone. Del Valle grew up in Lewisville, and was inspired in high school by letters she received from a friend who had chosen a career in the United States Army. “I remember receiving a letter where he detailed a cruise down the Nile River. I thought to myself, ‘I want to do that. I can do that,’” reflects del Valle.

Del Valle had made the choice six days after turning 18. “I had a delayed start, and wasn’t scheduled to begin my new career for several months. During that time, I started dating someone very seriously, and started to really reconsider my decision. I thought to myself, ‘I might have made a mistake; maybe I’d rather get married and start a family.’ I went all the way to Raleigh to change my mind. What ended up happening was I was talked into staying, and they gave me a corpsman position. I knew I wanted to be in medicine somehow, and this new opportunity was going to get me closer to it,” explains del Valle.

Del Valle headed to boot camp outside of Chicago, leaving the Monday before Thanksgiving. “It was absolutely the worst Christmas ever, missing my family. I remember using my calling card to contact my family, and trying to call everyone I could think of on Christmas Eve. It was hard to remember their phone numbers, and no one answered when I did,” recalls del Valle. “The 16 weeks corps school in Great Lakes, Illinois, was like Emergency Medical Training School. I had been drawn to labor and delivery since I was 12 years old, and there was a whopping one page dedicated to birthing a baby in my book.”

Having excelled academically in her program, del Valle was awarded the first pick in her next post. “I really wanted to go to Italy. I had gotten married during my time in corps school, and wasn’t allowed to take the billet because it was an unaccompanied one. So, without much time to discuss with anyone what my next decision was, I was headed to California. Luckily, it ended up being in San Diego instead of Barstow, my original assignment. I didn’t realize the bullet I had dodged. Back then I didn’t have Google readily available to realize Barstow was home to the largest thermometer outside of Death Valley,” jokes del Valle.  Del Valle worked for the Naval Center in San Diego. “It was the nicest hospital. They sent me to gastro and neurology where I stayed for about 3½ years. I yearned for labor and delivery, and was able to do so only on occasion. If the doctors had a conference, I would be assigned there temporarily.”

Del Valle enjoyed completing her enlistment commitment in California. “Right around when Sept. 11 happened, my contract ended. I was surprised, but they still let me out,” mentions del Valle.

Del Valle and her husband moved back to Winston-Salem. “I took a year of classes at Winston-Salem State University. After that year I was accepted into the University of North Carolina at Chapel Hill and decided to attend to pursue nursing. Ironically, I had always wanted to go to a small school, a place where everyone knows each other’s names. But they had such a good program, I felt it was a wise choice,” explains del Valle.

Del Valle would finally get the labor and delivery job she had dreamed of as a young child. Moving to Baltimore, Maryland, del Valle began working at Johns Hopkins Hospital. She and her husband lived there for 3½ years. In 2010, her first child, Atticus, was born while there too. Del Valle would add daughter Madeline in 2013. During that time, there were several geographical moves for her family due to her husband’s career, including France, New York City and North Carolina.

Ultimately after several years of different locations, del Valle would wind up planting roots in the place she was raised and called home. Del Valle secured a job at Forsyth Hospital delivering babies, while also raising her two children near family. “What I love about helping birth babies is the bond you have with somebody. I really, really, really love labor and delivery. The story telling during it, the whole experience is just really amazing,” describes del Valle.

Del Valle started another new adventure in her career last October. “I came to Summit School when one of their longtime nurses retired,” notes del Valle. The position had been filled for so long, and I had to consider it. We had been part of the Summit School community for awhile with my children attending and loving it so much,” mentions del Valle. As someone who loves being in a community that is close, Summit was a great fit, and way to be closer to her children during the day. “I love seeing my children daily. I love giving back in a community that has given my family so much. There is a lot of autonomy here.”

Del Valle hasn’t completely stayed away from her love for labor and delivery. She still works several days a month to help both new and experienced families bring their babies into the world in addition to her position at Summit School.

Del Valle’s adventures that helped shape her careers, grow herself personally, and cultivate new experiences make her truly grateful for her time back here in Clemmons. “On the weekends my kids and I love trying new things,” details del Valle. “We go to different festivals and take advantage of all the local events that this area has to offer. Learning new things, spending time together as a family, that’s what is most important.”

Our neighbor has proven that new doors and challenges are meant to be opened and tackled. Although the unknown is scary, del Valle has faced head on what is meant to be with hard work, integrity and grit.  The reward from it has been quite sweet. As Oprah Winfrey once stated, “The biggest adventure you can take, is to live the life of your dreams.”