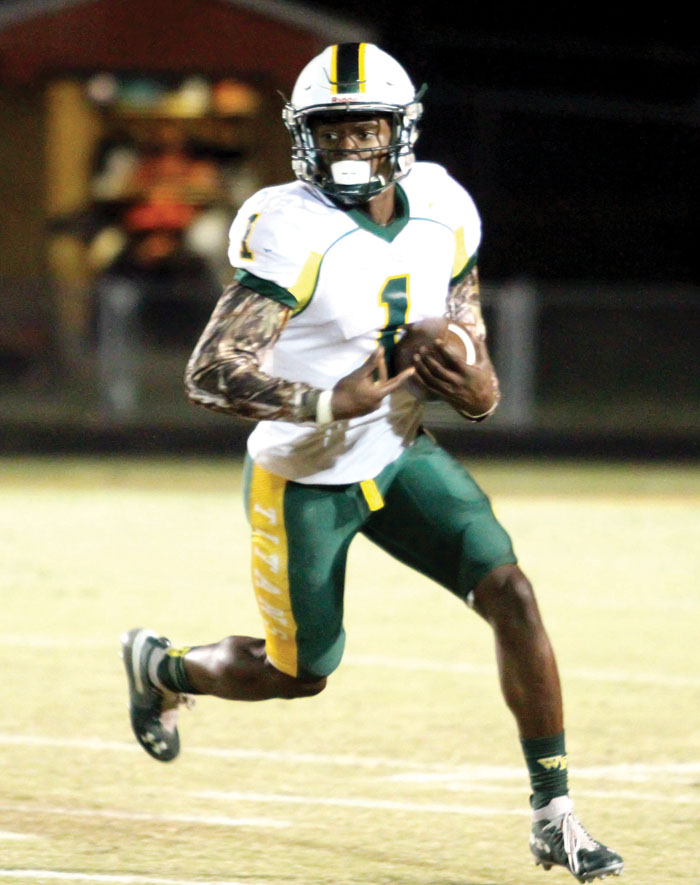 Last Friday night’s showdown in the Central Piedmont 4-A opener between West Forsyth and East Forsyth had just about everything that would have befitted a state championship game.

Two of the top-ranked teams in the state stood toe-to-toe against each other in a thrilling 48 minutes chock full of big plays, momentum changes, missed opportunities, comebacks, lead changes in the fourth quarter and plenty of breath-holding in the game’s final minute as East Forsyth lined up a potential game-tying field goal from 47 yards.

Only after the Eagles’ kick sailed wide left with 33.7 seconds left — it had the distance — could West Forsyth exhale and celebrate a dramatic 41-38 win against the Eagles to improve to 7-0 (1-0 CPC 4A).

In short, this game lived up to the hype surrounding it.

“What an awesome atmosphere for high school football,” Coach Adrian Snow of West said. “We rolled in here around 6 (pm) and there were already a bunch of people in the stands. The great thing about this rivalry is that it has very much turned into a thing of respect. And their kids, they fought the fight tonight, too. They didn’t want to give up. I know (East Coach Todd Willert) is proud of them. And that’s what this rivalry has become. This one was so fitting for these two programs.”

G’mone Wilson ran for 217 yards and two touchdowns on 25 carries and had a 19-yard touchdown catch.

“He’s electric, man, and those five guys up front are pretty special too,” Snow said. “They just get after people and lean on you for a while to make it interesting. Zy (Dillard) is also special and we’ve had pretty good success with our running game all year.”

Quarterback Jalen Ferguson threw for two touchdown passes in the first half, and Zy Dillard ran for 93 yards and a touchdown — a 44-yard sprint down the right sideline in the third quarter that gave the Titans what appeared to be an insurmountable 34-17 lead.

That was before East stormed back with 21 unanswered points that bridged the third and fourth quarters to take a 38-34 lead with 7:46 left to play after a 60-yard touchdown pass from Ty Lyles to Chris Chaplin.

West answered on the very next series after a 10-yard scoring run by Wilson — his second of the game — that put the Titans ahead 41-38 with 7:05 left. West forced a three-and-out on East’s next series but couldn’t pick up a first down on its next possession to salt the game away. East got the ball back with 2:38 left and drove to the Titans’ 29 before two straight pass attempts were broken up in the end zone, setting up the long field goal attempt that missed.

Wilson set up the go-ahead touchdown with a 53-yard run on first down, his first play back after suffering a cramp in his hamstring during West’s first series of the fourth quarter and having to be helped off the field.

“I’d give my heart to this team,” Wilson said. “We gave it all we had tonight. We wanted it so bad. We talked about it all week. This was the best football game I’ve been in. But we knew it was East Forsyth. We tried not to think about the name. We thought more about the team. We watched the film and we knew what they could do. But we also knew what we could do, and we came out and did it.”

The loss by the Eagles, the defending NCHSAA 4-A state champions, broke a string of 21 straight wins.

The Titans extended their lead to 27-10 after Will Knight scooped up an East Forsyth fumble and returned it 68 yards for a touchdown with 8:05 left in the third quarter.

Javon McAllister returned the ensuing kickoff for a touchdown as the Eagles trimmed their deficit to 27-17, but Dillard responded with his touchdown run to stretch the lead back to 17 points. After the Titans held East to a three-and-out on its next series, the Titans faced a fourth-and-1 on their next possession at their 31.

Following a timeout, West drew up a fake punt that was stuffed by East that turned the momentum and led to the Eagles short-lived comeback.

“Hindsight is 20-20, but we had been working on the fake and felt good about it, but they made a play,” Coach Adrian Snow of West said. “That’s what happens in games like this. And then all of a sudden, the switch flipped. Up until then, we were rockin’ and rollin’ in that third quarter. But then we had to be resilient and we got our stuff back together.”

“We talked about it last week that if we were fortunate to get a win, we would need to be careful about bringing them down off that cloud to get ready for the next one,” Snow said. “We’ll enjoy this one and then get back to work on Monday.”

Titans power past Page to move to 6-0