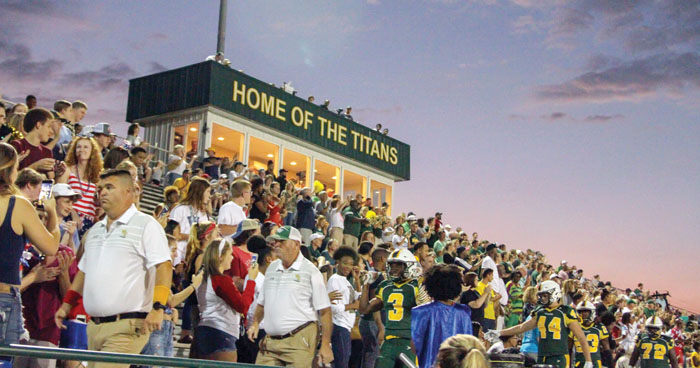 West Forsyth fell from the ranks of the unbeaten last Friday night at Jerry Peoples Stadium.

Davie County piled up more than 500 yards of total offense and stunned West 37-34 in a Central Piedmont 4-A clash, spoiling homecoming and sending the Titans to their first loss of the season after opening with seven straight wins.

The Titans’ defense, which has been steadfast after allowing just 78 points — 38 of which came in last week’s win at East Forsyth —  through the first seven games, had trouble keeping up with the War Eagles on the ground and through the air.

Davie Quarterback Nate Hampton completed 31 of 38 passes for 304 yards and three touchdowns and had 74 rushing yards and an 8-yard touchdown run.

Jack Reynolds hauled in 15 catches for 180 yards and two touchdowns.

Running back Tate Carney had 16 carries for 91 yards and a score to go along with five receptions for 68 yards and a touchdown.

Davie finished with 30 first downs and converted 9 of 15 third downs and 3 of 4 fourth downs to keep drives alive. The War Eagles didn’t have to punt until 2:52 was left in the game and scored on four straight possession in the second half as they created some separation and forced the Titans to play from behind.

West (7-1, 1-1 CPC) did plenty to hang around and still had one final gasp after recovering an onside kick with 2.2 seconds left following a 9-yard scramble from Jalen Ferguson that cut Davie’s lead to 37-34. The Titans’ hook and lateral attempt from the 49-yard line fell incomplete as time expired.

West finished with 470 yards of offense, with G’mone Wilson leading the way with 157 rushing yards and three touchdowns on 23 carries. Zy Dillard had 14 carries for 85 yards, and Jalen Ferguson threw for 186 yards and rushed for 51 yards and a score on five carries.

West led 14-3 in the first quarter after marching down the field in five plays, capped by a 9-yard touchdown run by Wilson.

After Davie kicked a 27-yard field goal on its opening possession, Nasion Johnson returned the ensuing kickoff 79 yards for a touchdown.

Carney countered with a 3-yard touchdown run on Davie’s next series to trim the lead to 14-9, and Reynolds caught his first touchdown pass of the game from 17 yards out to give Davie a 16-14 lead at halftime.

The War Eagles drove down the field on the first possession of the second half and capped that with an 8-yard scoring run from Hampton to push the lead to 23-14.

Wilson responded with a 6-yard burst with 5:43 left in the third quarter to cut the lead to 23-20, but Davie immediately responded with a 11-yard touchdown pass from Reynolds to Hampton for a 30-20 lead.

The Titans marched down the field on the following series and scored on a 3-yard run by Wilson to cut the lead to 30-27 with 10.4 seconds left in the third.

Davie tacked on another touchdown on its first series of the fourth quarter on Carney’s 15-yard scoring catch as the lead swelled to 37-27.

West turned the ball over on downs on its next possession and didn’t get it back until 2:52 remained in the game, leading to Ferguson’s late touchdown run and subsequent onside kick.

Davie improved to 5-3 overall and 2-0 in the CPC to take over sole possession of first place.

“At the end of the day, we’re going to get everybody’s best shot,” Snow said. “That’s a tribute to us. You’ve just got to be ready to play, and that’s all of us. We got out-played. We got out-coached. And I let everyone know that we’ve got to go and look in the mirror now and keep our chins up and go from there. How we react to this will be huge. We’ll got to get back up on that horse next week and go play.”

West will take on Reynolds Friday night at 7:30 at Deaton-Thompson Stadium.