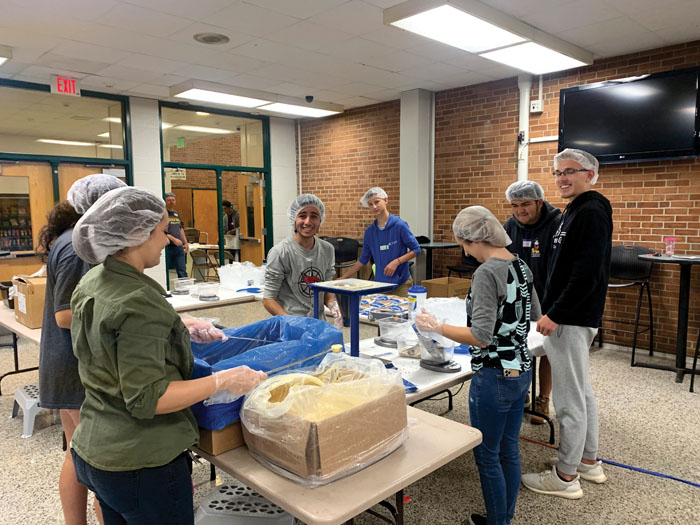 A “ Feed My Starving Children Event” was hosted on Saturday, Oct. 19 in the cafeteria of West Forsyth High School. West Forsyth Key Club, Little Richard’s BBQ, and the Kiwanis Club of Clemmons teamed up to prepare meals for less-fortunate children around the world.

Two-hundred and seventy-five volunteers packed 504 boxes and prepared 108,864 meals for the event. The meals consisted of MannaPack Rice and each MannaPack has a serving size for six people. The packers averaged packing more than two boxes per hour, which is 72 packs of food that serves six people each. The normal average of boxes packed in one session is 0.8, so it was a total community effort to complete the task.

For the last year, Little Richard’s BBQ has put on “Meal for Meal Mondays” at all five of their locations to raise funds for this event. For every meal sold on Mondays, Little Richard’s provides a meal for a starving child around the world.

Tara Bugg, the FMCS event supervisor, thanked the volunteers and commented that, “It was so fun to serve with everyone. The students were great to work with and some super awesome packers (I still can’t believe they did it). Thank you Stephen (Karageorgias) for having this vision for Little Richard’s and your community. I love seeing people take their work and use it to change lives and Little Richard’s and the West Forsyth Key Club did that so well.

Volunteer Owen Newsome, a freshman, said, “I had a great time packing and running between different stations to provide more supplies. I had a great time meeting new people along the way and hope to do it again next year.”

Sophomore Abigail Nix said “I will definitely remember that day for a long time. Personally, I love doing community service and this project was one that stood out to me. Not only was packing the food cool, but I admired the amount of hard work these people put in all the time for this organization.”