Local Rotarians help in fight to eliminate polio throughout the world 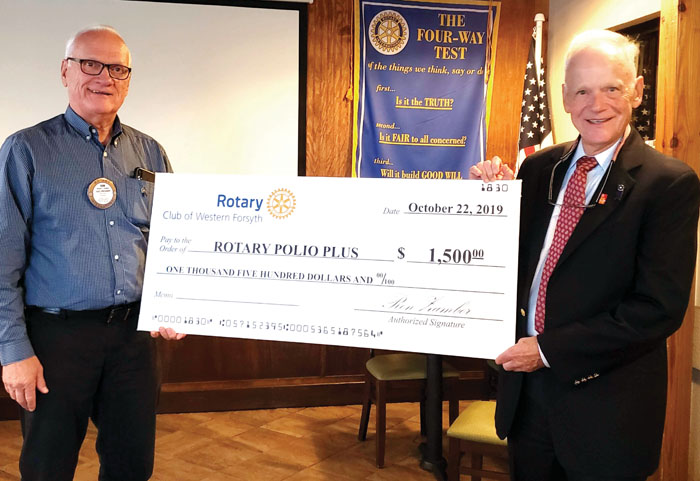 To celebrate October Polio Plus Month, the Rotary Club of Western Forsyth presented a check for $1,500 during its Oct. 22 meeting to District Polio Plus Leader Mike Conrad. The Bill & Melinda Gates Foundation has committed to make a two-to-one match of this donation.

Polio, or poliomyelitis, is a paralyzing and potentially deadly infectious disease that most commonly affects children under the age of 5. The virus spreads from person to person, typically through contaminated water. It can then attack the nervous system. Rotary International made a commitment in 1985 to rid the world of new polio cases. At the time that Rotary made its commitment, there were 350,000 new polio cases each year. The disease was prevalent in 125 countries.

Other organizations noticed the progress that Rotary was making in its effort to eradicate polio and the World Health Organization, UNICEF, the U.S. Centers for Disease Control and Prevention (CDC), the Bill & Melinda Gates Foundation, and governments of the world joined Rotary in this important project.

These organizations have delivered more than 2.5 billion free vaccinations to the children of the world. Polio cases have been reduced by 99.9% with only two countries remaining endemic.