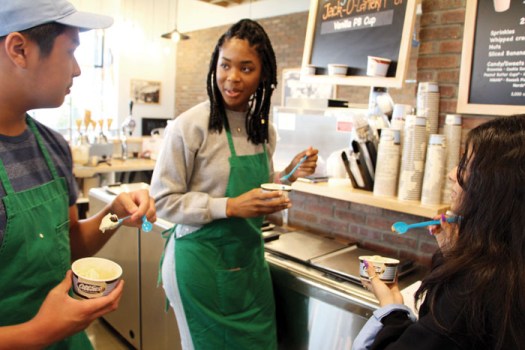 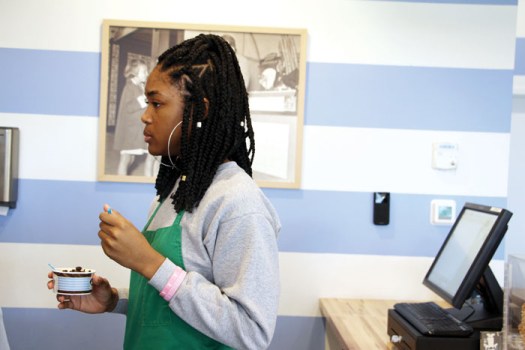 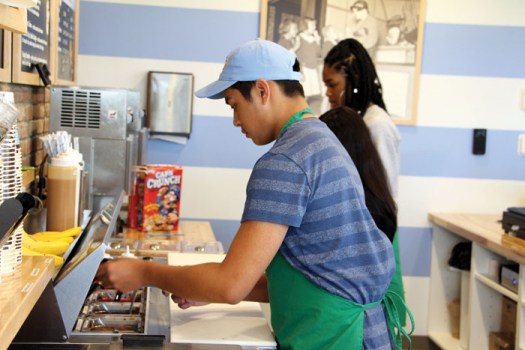 West Forsyth’s Thomas Lirio works on creating one of the school’s flavors. 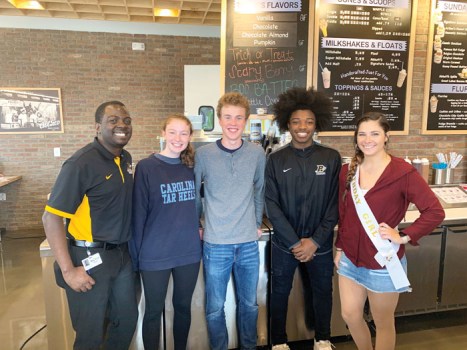 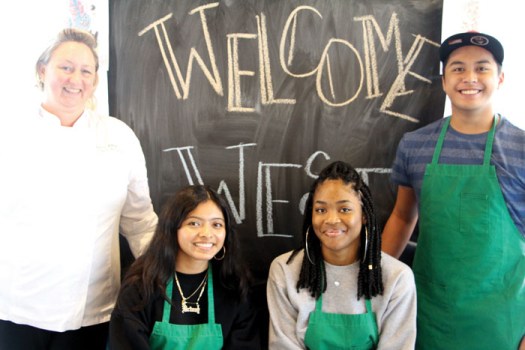 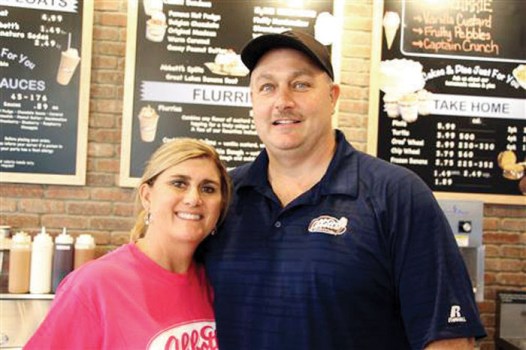 For teacher Sherry Billings at West Forsyth High, having students in her Food and Nutrition I class participate in The Flavor Bowl Challenge at Abbott’s Custard in Clemmons was about far more than creating a unique recipe for a frozen-custard treat.

For one, it was about opening the door to the real world of owning and running a business that serves food. When students Karena Sorrell, Thomas Lirio, and Briney Tolentina went to the shop on the afternoon of Nov. 30, owner Brad Wall gave them a behind-the-scenes tour and answered any questions they had along the way.

Getting to spend time with him was a big deal, Billings said.

It’s one thing when she talks to them in school as a teacher. It’s quite another when it’s real-world.

“It’s a real business owner teaching them,” she said.

“It’s a good experience to see it from the inside,” Tolentina said.

The people at Reynolds High were excited for similar reasons. Later in the week, Laura Doughton, Sam Pearsall, Jeremiah Arrington, and Brayden Short, who works at Abbott’s, headed to Abbott’s with foods teacher Phillip Boyd, and Pamela Henderson-Kirkland, the school’s arts magnet director.

“The experience was incredibly rewarding, and helped to engage students with not only one another, but with local community businesses,” Henderson-Kirkland said. “

“In addition, students were able to ask questions about what is involved in the process of making one’s entrepreneurial dreams come to fruition (pun intended).”

Doughton said she was happy to participate.

“I thought the idea was really interesting,” Doughton said. “When we first got to Abbott’s they showed us behind the counter and told us about how they make the custard. I really enjoyed learning about the natural ingredients they use and how that differs from normal ice cream.”

And then, of course, there was all the fun to be had in coming up with a unique combination.

With The Flavor Bowl Challenge, students from each school would create a flavor combination that would compete against the other school’s flavor.

“We pretty much try to accommodate anybody’s wish,” said Denise Chouinard-Thompson, who works at Abbott’s and serves as the community-relations specialist.

After the West Forsyth students toured and talked with Wall — who owns the shop with his wife, Jennifer — Chouinard-Thompson showed the students all the toppings and turned them loose.

“I think it’s neat to watch them learn,” Jennifer Wall said as the students tried this and that combination and discussed the results each other. “I can learn from them as much as they can learn from me.”

It was also interesting to get a sense of how food-and-nutrition education has developed over the years, she said. “When I was in school, it was Home Ec. I did take that.”

Jennifer Wall graduated from West Forsyth in 1991. Today, the Walls’ son, Cameron, is a sophomore at West Forsyth.

Jennifer Wall has a long work day. She also owns Carolina Spirit Athletics in Clemmons so, after starting her day at Abbott’s, she finishes it there.

The West students came to a consensus in a surprisingly short period of time. The three being friends helped a lot with the process, Sorrell said.

They chose to use pumpkin-flavored custard and top it with marshmallow sauce and crushed Oreos.

“That goes really good together,” Billings when they gave her a sample.

The next question for the students was what to name it. Using the first letter of the ingredients — “P” from pumpkin, “O” from Oreos and “M” from marshmallow gave them something to play with. With West Forsyth being the “Titans,” they soon came up with Titan Pom Pom.

When the Reynolds students and staff members came in, they came up with Demon Apple Crunch.

“After running through a couple of ideas,” Boyd said, “the Demon team decided to go with a delightful delectable, Demon Apple with a slight crunch custard flavor. Our ingredients were seasonably simple vanilla custard, apple filling, caramel, cinnamon, pie crust, with pralines.

As Henderson-Kirkland put it, “There’s sugar and spice, all the things that make up an award winning custard!”

Once Titan Pom Pom and Demon Apple Crunch became available to customers, the competition was close. A running tally was kept on the chalkboard. At one point, Brad Wall said, the Flavor Bowl was too close to call because the chalkboard tally had only a 1-point separation.

In the end, the official winner was Reynolds.

“We were happy to participate in this delicious competition,” Boyd said.

“The students were engaged. They were thinking about their target market, the time of day people would come in, even whether they wanted to add the nuts (pralines) or not because of the children and allergies.”

“The experience was amazing and something to look forward to again.”

In the coming weeks, Abbott plans to continue the competition with other interested high schools.

“The Flavor Bowl Challenge gives area high schools a variety of options,” Chouinard-Thompson said. “Some utilize the opportunity to allow students in particular courses to implement concepts presented in class whether in the area of foods, marketing, or entrepreneurship. Other schools want their Student Government Association to be involved. Each school has the opportunity to choose how they want to implement the challenge decision-making on their end.”

“Good clean fun with learning application is what we are hoping to promote.”

“Brad and Jennifer are both committed to mentoring young people in the community to reach their full potential, and what better way than through something fun?”

If enough schools decide to participate, Brad Wall said, he would take a round-robin approach in which all of the high schools would compete against each other with the top two competing for the Flavor Trophy and 10% of the proceeds from the championship round going to the winning school.

For students who want to know more about the history of businesses in the county, Brad Wall is a good man to talk to. He worked for Krispy Kreme for 20 years, and designed some of the equipment the company uses to make doughnuts.