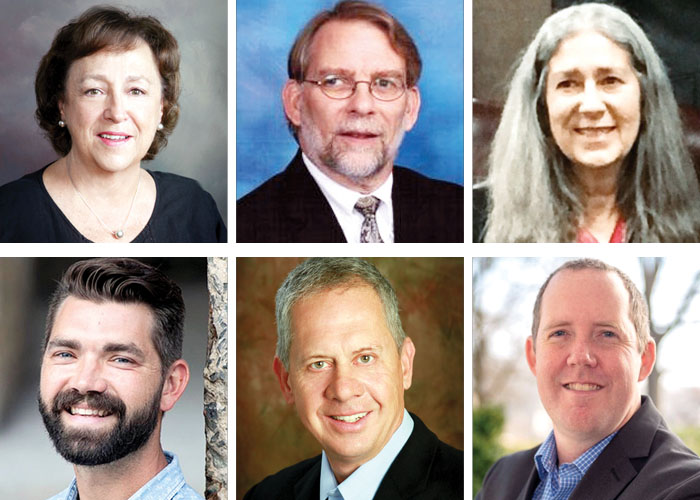 The 2019 municipal election results are in, and incumbent John Wait is back for a second term as mayor, but the Clemmons Village Council has a new/old look with the return of Mike Rogers and Mary Cameron.

Wait, a political newcomer two years ago who successfully ran for mayor in his first try, held off another challenge from Larry Kirby, the longtime village public works director and later town manager, as Wait took nearly 56 percent of the vote.

Chris Wrights, who is completing a four-year term, was the overwhelming choice in a crowded council race with six candidates vying for three positions, as he received 1,623 votes (24.5 percent of the vote), followed by Rogers (1,203 votes) and Cameron (1,147 votes).

Rogers, who served on the council for six years from 2011 to 2017, and Cameron, who won six four-year terms and had been on the council for 24 consecutive years from 1993 to 2017, were swept out of office two years ago as voters sided with the group of challengers — Michelle Barson, Scott Binkley and Lofland — who were opposed to building a median on busy Lewisville-Clemmons Road.

Wait said he remains committed, in his second term, to making sure things get done and that residents and local businesses are heard in village hall.

“My campaign focused on all the projects and issues council and I have been involved with the last two years and where I hope we can take this momentum going forward,” Wait said. “As I spoke to people door to door, that kind of commitment and information was important to them.”

Meanwhile, Kirby, who had more than 1,000 votes as a write-in candidate two years ago, expected to make a successful run with his name on the official ballot this time, but still came up less than 300 votes short.

“I congratulate the mayor on another two-year term,” Kirby said. “I am extremely excited that he will have a terrific council to work with, and I hope that they will move Clemmons forward.”

Wait said he was “pretty excited about working with the new council,” even though it means saying farewell to Lofland, whom he said has been very committed to listening to the public since she was elected.

“Mary Cameron and Mike Rogers are seasoned council members, and they will be fully briefed on some of the bigger issues we have pending right now,” Wait said. “I expect that they will have their own input, and I do not anticipate any issues in making sure they have ample opportunity to ask questions, give their opinions and work with the returning council members on those issues.”

Cameron said she thought this council, which includes Barson and Binkley (both elected to four-year terms in 2017), along with the re-elected Wrights and Rogers, will be a strong one.

“Every member knows what the job entails and has done it well,” Cameron said. “I feel confident we will work well together, hit the ground running and get things done for our citizens.”

Rogers said that Clemmons voters were well informed and able to see through “the rhetoric and misinformation” when selecting their local government officials.

“I am honored to be re-elected to the Clemmons Village Council and anticipate that this council will carry on the work of the previous council to make Clemmons better tomorrow than today,” Rogers said. “I have been in contact with the returning council members and village staff, getting briefings of ongoing issues. There are hard issues to be resolved, and it will take the willingness of all to find the real solutions and to get it right based on facts and verified reliable data.”

As the top two vote-getters, Wrights and Rogers will get four-year terms while Cameron will get a two-year term.

Wrights said he was honored to have the opportunity to serve a second four-year term but never imagined he would receive the most votes.

“I have tried my best to always serve with honesty, integrity and transparency, so to have the community affirm that they like the work I have been doing with their votes is a great feeling,” said Wrights, who added the council has many important issues to address in the next few years. “Although I am sure we will not always agree on the best way to proceed, my expectation is that council members will be able to remain civil, set differences aside when necessary, and always work together for the betterment of the community.”

Mike Combest, who was the top vote-getter for council in 2015 and received a four-year term, opted not to seek re-election.

In the other municipalities in the area, Lewisville and Bermuda Run both voted in mayors who ran unopposed with Mike Horn being elected to a fourth two-year term in Lewisville, and Rick Cross, who has been serving as a council member, being voted in as the new mayor of Bermuda Run.

The Lewisville Town Council will have a different look with Fred Franklin, the lone remaining member of the current council seeking re-election, being the only returnee as he claimed one of the six available seats.

Franklin, who grabbed the final spot among the nine candidates, will be joined by top vote-getter Jeanne Foster, followed by Ken Sadler, David Smitherman, Jane Welch and Melissa Hunt.

Brian Shumack, Derek Roach and Mike Sullivan were the other candidates in the Lewisville Council race.

Four members of the current council — Robert Greene, Sandra Mock, Ed Smith and Jeff Zenger — chose not to seek re-election, thereby honoring one of the town’s charter provisions of not exceeding four consecutive two-year terms. And Marci Gallman chose not to run again.

In the Bermuda Run, challengers Curtis Capps and Heather Coleman were the top vote-getters among the three candidates seeking two available council seats.

So that means John Guglielmi, a longtime member of the council who moved up to take over as mayor in September but was running again for the council, was left out with his third-place finish.

Upon Cross being elected as mayor and his swearing in at the Dec. 10 council meeting, his seat on the board will then be available for the council to appoint an individual to fill that seat until the end of the term in 2021.

For Clemmons Council (Vote For 3)

For Lewisville Council (Vote For 6)

For Bermuda Run Council (Vote For 2)