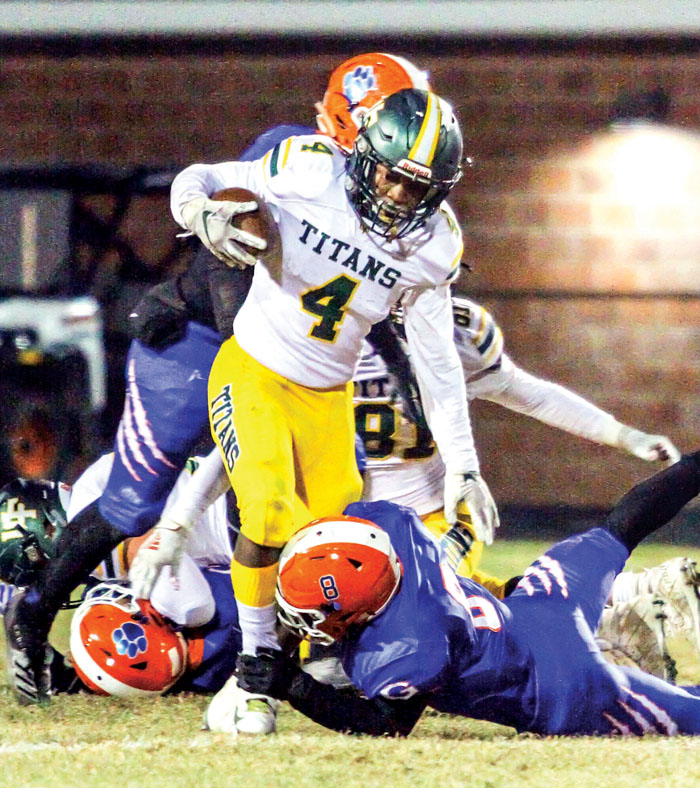 Coach Adrian Snow was addressing his team on the field at Marty Stanley Stadium last Friday night after polishing off a convincing 34-7 win against Glenn.

Snow stopped in mid-sentence between the celebratory cheers when he saw principal Charles McAninch walking towards the team.

Snow raised his right arm and pointed to McAninch and said ‘I think we’re going to need a new banner. We ran out of room two years ago.”

McAninch acknowledged the declaration with a broad smile and a nod of his head.

Indeed, the West Forsyth Titans once again reign supreme in the Central Piedmont 4-A Conference for the second time in three seasons.

Their dominant win against the Bobcats last Friday also gave West a first-round bye in the NCHSAA 4-AA state playoffs. They will play their second-round game at home on Nov. 22 against the winner of the Reagan and Southern Pines Pinecrest game.

Zy Dillard and G’mone Wilson ran roughshod on what was billed as a dominant Glenn defense, which entered the game allowing just 17 points per game and had recorded four shutouts this season while entering the game against West unbeaten in conference play.

Dillard finished with 198 rushing yards and two touchdowns — a 54- and a 60-yarder — on 19 carries. Wilson ran for 127 yards and a touchdown on 22 carries and also had a 55-yard touchdown reception.

As impressive as their runs were throughout the game, the most impressive run may have come from Snow, who managed to elude the impending ice water bath that several players tried to dump on him once the win was final.

After playing to a scoreless tie in the first quarter, West came alive and scored 28 points — two touchdowns from Dillard and two from Wilson — in the second to take command.

After forcing a fumble on the Glenn’s first possession of the second half, Jalen Ferguson (12 of 17, 174 yards, two touchdowns) connected with C.J. Graham on the Titans’ first play of the third quarter with a 36-yard touchdown pass that swelled the lead to 34-0.

Glenn’s only points came after one of Ferguson’s passes was tipped and intercepted after it looked like the Titans were driving in for another score.  Jahaad Scales returned the interception all the way to the West 1-yard line. The West defense stood firm on the next two plays and pushed Glenn back to the 7-yard line. But on third down, Camden Coleman connected with Alex Mussen on a fade route in the right corner of the end zone for the Bobcats’ only points of the night.

“Our defense has really stepped things up the last couple of weeks,” Snow said. “They figured some things out after the Davie loss and made some good adjustments and we saw that tonight. Offensively, we had to weather them a little bit. They’re really good on defense and we needed to figure out what was going on and what they were going to try to do to attack us. Once we did that, we found some things we felt good about, and that was evident in what some of our kids did.”

“Our line was pounding on them and I saw a lot of green in front of me all night,” Dillard said. “They kept opening up a lot of holes for G’mone and me to break through. We wanted to keep our foot on the gas tonight and finish strong. It’s a big blessing for us to be in this position now and we’ll keep pressing hard to get ready for the next game.”

West Forsyth girls finish as runner up in NCHSAA…