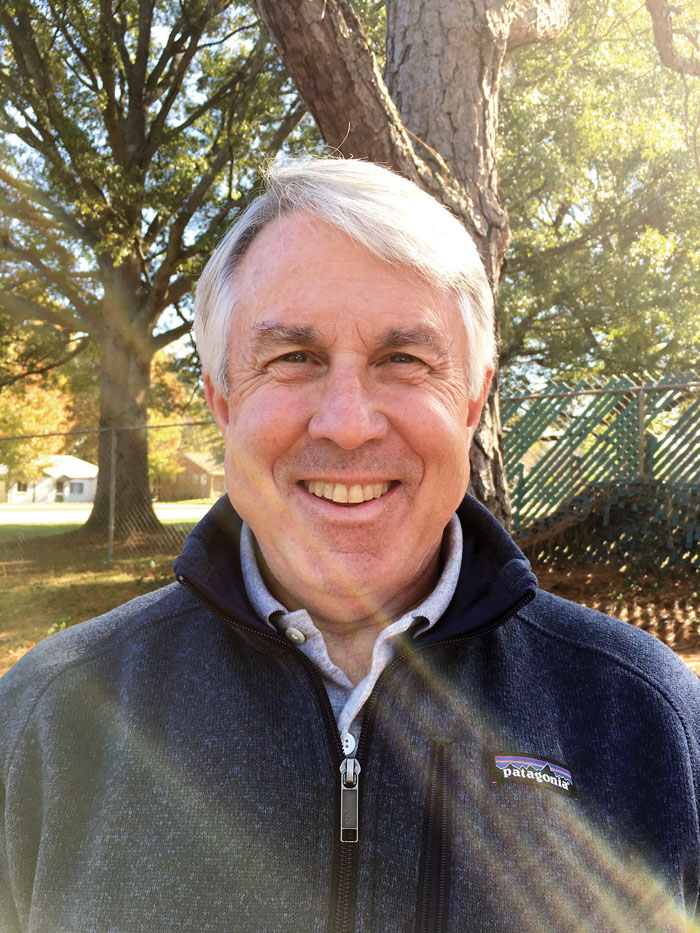 Larry Holloman grew up always enjoying sports, particularly the camaraderie, competition, and hard work that was at the core of it. “I fancied myself an athlete,” laughs Holloman. Starting off playing baseball and football from an early age, Holloman ended up the captain of his football team his senior year at Parkland High School.

Holloman headed to Lees-McRae College when it was still a two-year junior college. “I looked at several places, and realized I needed a little more structure in my life. I got lots of advice from folks where I should go. Luckily, I went to the right place for me. I ended up making lifelong friends there. It was some of the best times of my life,” reflects Holloman.

Holloman finished up his two years at Lees-McRae College and headed back to the Winston-Salem area. “I started working as a salesman for Bocock-Stroud,” mentions Holloman. “I had known the owners from high school.” Holloman also got some sage advice from a friend that recommended joining the fire department. “It was a 21-week course,” remembers Holloman. “I knew instantly it was the right fit for me. I liked the physicality of it. Having always enjoyed sports, I liked that aspect. I was trained as a firefighter and to be an Emergency Medical Technician (EMT).” Holloman knew after completing the academy that he needed to get his bachelor’s degree in economics and business administration and did so at High Point University.

Holloman also had made another life change around this time frame. He married his high school sweetheart, Kathy, in May of 1976. “We had met when she was in seventh grade and I was in ninth grade. We were off and on, but it was only because we were so young. I always just knew once I met her,” mentions Holloman.

Holloman’s career in the fire department was also on track. He was promoted to engineer as soon as he was eligible to be considered. After two years, he took the captain’s test and passed with flying colors.

During this time, Holloman found a way to still tap into this love for football, especially at the collegiate level. He began running the chains at Wake Forest University under several different coaches. “I enjoyed doing that for 35 years,” reflects Holloman.

Holloman officially retired from his other passion, the Winston-Salem Fire Department, on Jan. 1, 2008, as the battalion chief. Although, retirement hasn’t been spent relaxing on various beach vacations. Holloman has taught methodology courses at the fire department academy. “The classes help teach future instructors how to teach. When I initially retired, I taught in a lot of the community colleges across the state,” explains Holloman. He also earned the opportunity to go and coach football at Catawba for one year in 2013. “I can’t even tell you how much I enjoyed that opportunity,” reflects Holloman.

The college football enthusiast was asked two years ago to help run chains at West Forsyth High School which he enjoys doing. “It’s really hard for me to watch games from the stands. I like to be on the field helping in some capacity,” mentions Holloman.

Holloman enjoys his grandfather hat as well. Kathy and Larry’s sons have made them proud grandparents four times (three grandsons and one granddaughter ranging in ages from 2-12). “We are lucky that they live so close by in Greensboro and Clemmons).

Holloman likes working during his retirement days at his friend’s automotive shop. “I like to get up and go to the Jerry Long YMCA early in the morning before I head off to work at Roger Marion Automotive,” notes Holloman. “It keeps me busy and I enjoy working with the people.”

Our neighbor has always been one to make the most out of every opportunity he has been given. His hard work and dedication has paid off both personally and professionally. As Thomas Jefferson once noted, “I’m a great believer in luck, and I find the harder I work the more I have of it.”