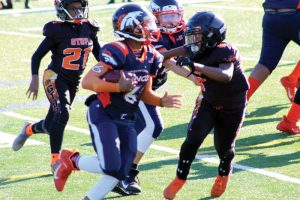 The 11U Orange Forsyth County Broncos recently won a game at Mountain Island Charter School to clinch a state championship.

A team that started out unassuming and not considered competitive ended up dominating the season. The Broncos started off the season losing the first game against a nationally ranked team. The Broncos won every game after that, earning a 7-1 record. They faced the same team again and won 14-13, taking the city championship title.

After winning both city and state titles, the Broncos are headed to Virginia Beach to play in the regional championship with an 11-1 record. “There has been so much growth in the players this season,” says one parent. The coaches are dedicated to teaching the boys life lessons through the game of football. The coaches hold the boys to a high standard on and off the field and give equal recognition to players with outstanding grades as well as players that are improving on the field every week.

Head coach Selester Stewart has worked hard to develop the players this year with the help of his assistant coaches Buey, Shoulars and Moore. The team mom Ms. Finn has also been a help for the parents, coaches and players. Stewart’s motto for the team is “hard work pays off.”

“I thank the parents for allowing me to coach their children,” Stewart said. “I thank the organization for giving me the opportunity to coach and I thank the boys for giving me their all. This has been an amazing journey with more than amazing people. I thank my coaches for allowing me to lead, for their sacrifices and dedication to the development of young lives. I thank the team mom for her unwavering support and dedication. Without her our success would not have been possible. We the Broncos have remained true to our culture and core values. One team, one family.”

Family matters: Football has been a way of life…