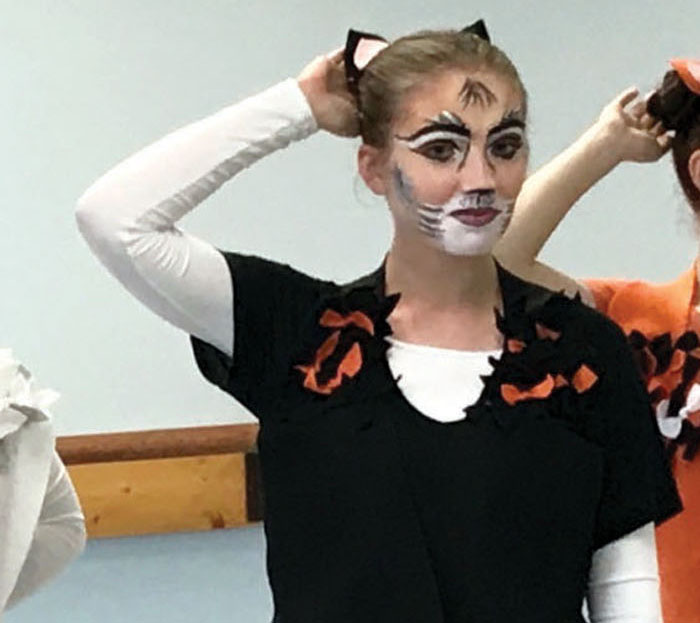 Amelia Tally in a workshop on Broadway’s CATS musical 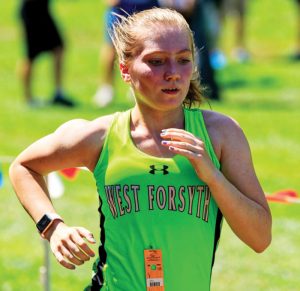 Whether it is performing a dance routine or running several miles at cross country practice, Amelia Tally is a young lady who is constantly in motion. The West Forsyth junior is also a stellar student who combines her active life outside of school with a challenging academic workload.

Among her many interests, she is most passionate about dance. “I starting dancing when I was four,” she said. “When I was younger, I danced because I loved music and movement, and I enjoyed making friends at the studio. As I’ve gotten older, it has become a stress reliever. Unlike many who are involved in dance, she is more focused on the artistic and technical aspects rather than being involved in competitions. I especially enjoy the creativity and the expression involved in various styles,” she said and noted that she has performed in ballet/pointe, jazz, and tap as a technical dancer.

Her mother, Beth, noted that dance has been a valuable experience for her daughter in a number of ways. “There is a lot of self-understanding and camaraderie,” she said about Amelia’s experience as a dancer. “The warmups are very calming, and the core strength and balance of each discipline benefits her in other activities.”

Angela Fuller has been Tally’s dance teacher at the Giving Arts Dance Project in Winston-Salem since she was in the fourth grade. Tally credits Fuller with expanding her horizons as a dancer by sponsoring trips the last two summers to New York City where her students took classes at the Broadway Dance Center and STEPS on Broadway. Classes at these studios are taught by Tony Award-winning dancers and choreographers, recent Broadway and national tour stars, and retired Broadway professionals.

Tally enjoyed the experience of visiting a large city that has so much to offer in the arts. “The New York City trips were a great experience,” she said. “The pace is so different there from Clemmons and Winston-Salem.” She feels that she learned so much from some classes that she attended and from the interaction with professional dancers during her trips the last two summers. “It was eye-opening to see the effort that dancers put into their work in that type of environment,” she said. “There is so much that goes into making a Broadway show including the costumes and the technical aspect of a production.”

In addition to her passion for dance, Tally has been an avid runner for most of her life. She started running in elementary school, and she later joined the cross-country team as a seventh grader at Hanes Middle School. She is now a part of the junior varsity cross-country team at West Forsyth. “I feel like I have always been running,” she said. “I just enjoy being outside and being alone with my thoughts.” Although she enjoys running mostly on an intrinsic level, she has participated in some community races including a half-marathon.

Tally noted that her interests in dance and running make for an interesting combination. “They really don’t relate to each other,” she noted, “but they each involve movement and muscle activity, and that is what I enjoy about both of them.”

Tally has built an impressive academic resumé. After three successful years in the HAG (Highly Academically Gifted) program at Hanes Middle School, she has challenged herself with demanding courses in high school. She is currently taking five advanced placement classes at the Career Center, and she finishes her school day by taking dance and Shakespeare at West. As a junior, this is her first year taking classes at the Career Center, and she noted that she enjoys the environment there where she takes classes with students from all over the county.

Tally enjoys both math and writing classes, a unique combination of right and left brain thinking. One of her favorite classes is AP calculus at the Career Center. Lisa Putnam, her teacher, had nothing but praise for her student. “She is a great student who is an asset to my class,” Putnam said.

Tally has been fortunate to have a family that has encouraged traveling, and she has had the opportunity to go on a number of interesting trips. In addition to the New York City trips with her dance class, she has traveled to Costa Rica with her mother, and she did a trip to Greece and Italy during the summer after eighth grade. While in Italy, she had the opportunity to attend an educational summit centered on the future of food. This included some fascinating experiences including taking culture-based cooking classes and attending seminars from speakers such as Anthony Bourdain, the well-known chef and television personality who unfortunately passed away last year. Tally remembers well a life message that Bourdain passed along to his students when she attended his seminar. “If you work hard, you can make it at anything” was his simple but profound message.

Despite her young age, Tally has already lived a life where this has been the case. In addition to her involvement with dance, running and school, she is a member of the Crosby Scholar’s program that encourages volunteer work in the community. Her involvement has included being a camp counselor for young children at Camp Merriwood and being a ball person at the Winston-Salem Open Tennis Tournament.

Tally has also been actively employed. In middle school, she helped a neighbor who ran an in-home child-care program, and she learned at a young age how to run a business. She has also worked at Harris Teeter.

As is the case with most young people her age, Tally is unsure about her college and career plans. If she goes to college in state, she is currently leaning to N.C. State as her first choice. On a recent visit to see family in Ohio, she and her mother visited Ohio State University, and she was impressed by the campus so she is considering going to college there as a possibility.

Tally is considering several career paths. “In the past, I focused on engineering, but now I am considering pediatrics or maybe journalism,’ she said.

Beth is proud of her daughter and impressed by her versatility and willingness to take on new challenges. “My biggest compliment of her is that she is quietly determined. She is so good at shifting gears. She adapts easily from one activity to another one,’ Beth said. “Most adults cannot adapt and make use of their time like she does.”