Family matters: Football has been a way of life for cousins Ferguson, Wilson 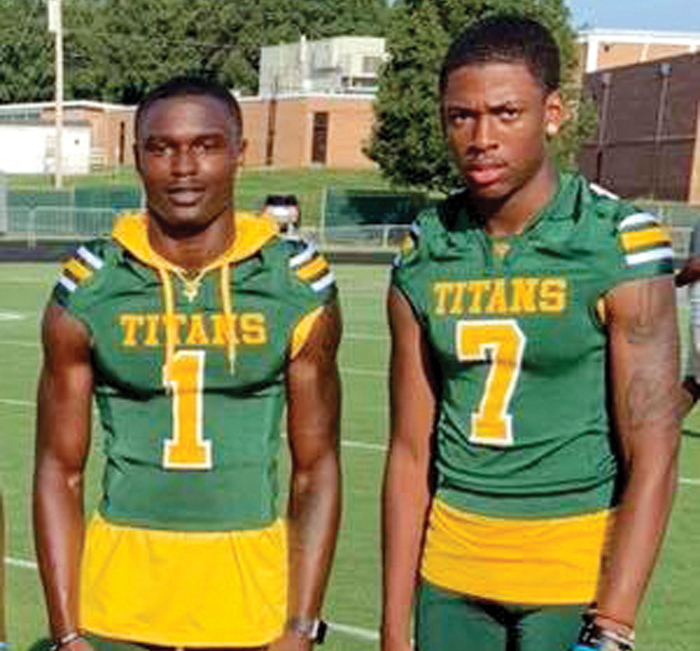 No. 1 stands 6-feet tall and weighs 185 pounds. He runs fast and with power. He’s capable of finding the end zone every time he touches the ball. He has led West Forsyth in rushing the last three seasons, including his electric 1,741 yards and 30 touchdowns this season.

No. 7 is a lanky 6-foot-4 and 180 pounds. His confidence in the pocket has developed since he became the starter as a junior. He understands how to effectively manage a game. Often, he is handing the ball off to No. 1 and watching him work. He has thrown for 1,362 yards and 12 touchdowns this season and rushed for four more.

Yes, G’mone Wilson and Jalen Ferguson are teammates. They are also cousins. They both have several colleges seeking their services calling on a daily basis. They’ve been harassing opposing defenses for the same team — mostly — since they were 7 years old playing Pop Warner for the Tiny Grayhounds. Wilson has always been a running back. Ferguson has always been a quarterback.

Their skills have been showcased together on football fields throughout the county, the city, the state, and even Orlando, Florida, and for the last four years, Jerry Peoples Stadium on the campus of West Forsyth.

Except that one year, when they two split up and played for separate teams — Jalen for the Tiny Indians, G’mone for the Grayhounds.

As fate would have it, the two teams squared off in the city championship. Jalen and the Indians were getting the best of the Grayhounds and were leading by five touchdowns entering the final quarter.

“G’mone showed out after that,” said Ferguson, who accounted for four of his team’s touchdowns that day. “He was going off. He was all over the place and was even playing defense, taking the ball from people and then going to the house. He even took it from me and scored. We still ended up winning that game by a touchdown, though.”

That was the last time the two cousins played on opposite teams.

“My cousin, Latonya Wilson (G’mone’s mom) and I decided after that game that that was never going to happen again,” Lawrence Ferguson, Jalen’s father and G’mone’s uncle and running back coach at West, said with a laugh. “That was a battle and they both played so well that day. But we never wanted to see that happen again.”

Even when they were on the same team, they were competing.

“It didn’t matter what we were doing — football, basketball, whatever — we wanted to make each other better,” Wilson said. “We even had a contest once to see who could hit (tackle) each other the hardest and neither of us really played defense. He got in a few good ones on me and I got him back. I think we finished up even.”

They played in the AYF National Championships for the Pfafftown Packers right before entering West Forsyth as freshman and finished in third place. Side by side, the running back and the quarterback.

“That was the game when I think we realized just how special they could be,” Lawrence Ferguson said. “The stuff we had seen them do against teams from around the city, they were also doing it to teams from all over the country.”

Wilson decided to stick to football once he got to West. Jalen Ferguson was still dabbling with basketball.

Ferguson waited patiently as a quarterback on the junior varsity team for two seasons. Once he broke through and earned the starting job as a junior, his numbers have been steady — as has his leadership.

He threw for 1,423 yards and 15 touchdowns last season and was entrenched as the starter.

“He has always been the fastest kid out there wherever we have played,” Ferguson said of Wilson. “I know what he’s capable of. I know when he gets the ball, he is going to make something good happen. He’s a playmaker. That takes a lot of pressure off of me because he has so many eyes on him. That helps open up the passing lanes. It’s been great to be together again the last two years with all this talent around us.”

“The way he has developed as a player and as a person has been incredible,” Wilson said. “He was always going to be a basketball player, but he figured out a couple of years ago that football could take him pretty far, too. He has taken his football to another level and that’s been really fun to be a part of and to see. I’ve always seen it, but at this level, that’s all we talked about as kids growing up. To achieve a lot of those goals and dreams we had as kids, side-by-side, for this team, has been pretty amazing.”

Lawrence Ferguson marveled at both of their developments and their ability to focus on one position.
“That’s pretty rare nowadays,” Ferguson said. “Normally, you have guys switching positions all the time, or moving to defense. Not these guys. They’ve been doing their thing since the beginning for the most part. They’ve been in the backfield together all their lives. They trust each other. They’ve been around each other long enough that they know things will get done and they will make plays.”

Both players said their main goal this year was to lead the Titans to a Central Piedmont 4-A Championship.

After receiving a first-round bye in the NCHSAA 4-AA state playoffs, West will take on CPC rival Reagan on Friday night at Jerry Peoples Stadium. West beat Reagan 31-21 three weeks ago in the regular season. It was Reagan which eliminated West from the playoffs last season in the first round.

“Now, we’re ring-chasing,” Wilson said. “We know we’ve got a big game coming up Friday and we remember seeing them celebrate on our field last year. We can’t let that happen again.”

“That left a bitter taste in our mouth all year,” Ferguson said. “We need to stay focused and not let that emotion get the best of us.”