Chamber, Rotary Club meeting discusses the future of the community 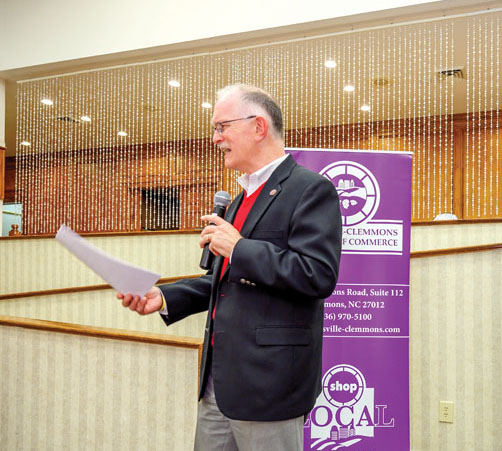 From fireworks to medians and other topics of local interest, the Rotary Club of Clemmons and the Lewisville-Clemmons Chamber of Commerce combined forces for a second straight year to host a meeting last Tuesday night at the Village Inn Event Center called “The Future of Our Community.”

The gathering included comments from Hank Perkins, town manager of Lewisville, and Pat Ivey, who heads NCDOT Division 9, along with welcoming remarks from Scott Spillman of the Rotary Club and Kristin Johnson of the chamber.

Perkins, who gave an update on life in Lewisville, delivered news that town’s 2019 fireworks celebration would be the last, saying it was “a tough thing, and we’re going to have some disappointed people.”

Lewisville emerged as the most popular fireworks display after Tanglewood discontinued having them on July 4th during the recession. Perkins hinted at last year’s meeting that the growth of the town and road system along with more commercial development would eventually force an end to the fireworks show.

“We lost our availability of land for fireworks this past year and while that’s sad, it’s also a testimony to what’s good about the economy and this side of Forsyth County,” Perkins said. “Business is booming. The reason fireworks is going away is not because we didn’t want to do fireworks, but you have to have a fall back area where there are no occupied buildings or infrastructure within a certain distance.

Perkins said that the town kept moving that launch location but eventually ran out of room.

“We’ve tried to find a spot in the downtown where we can do it, and now it’s no longer possible,” he said.

One of the positive developments in Lewisville is the new community center, which is estimated to be about 12,000 square feet, and will be located on a 15-acre tract on Lewisville-Clemmons Road that was donated by Mary Alice Warren right next to Jack Warren Park.

Warren’s family also donated the land for that park, which was built in 2010.

Perkins said that when the new community center, which has an overall price tag of about $5 million, is completed that the town will look to tie it all together into a single property.

He added that walking trails are proposed and that an amphitheater could be added in the future along with a dog park.

Perkins said that housing continues to be a “big thing” in Lewisville with another 300 or so homes added since last year’s meeting and that residential growth should continue, particularly on the north side of town with the addition of a sewer line where a new middle school is in the works.

Roads were a large part of Perkins’ talk last year, and he said that the Gateway project between the Williams Road interchange with U.S. 421 that goes up to the Williams Road/Shallowford Road roundabout is the one active project in the works.

Perkins said that the 1,200-foot stretch of road between the two roundabouts would have a median covering that entire distance.

“We have had a lot of adversity in this one,” Perkins said of the median, “but the town council has stood behind it and will continue to do so.”

Perkins said that the project is moving along with right-of-way acquisition and the hope that construction could start somewhere between late May and July.

He added that a future NCDOT project will feature the widening of Lewisville-Clemmons Road from Styers Ferry Road all the way to Shallowford Road.

Ivey, in his comments, gave more details on that “other” stretch of Lewisville-Clemmons Road, stating that right-of-way acquisition is scheduled for 2025 and construction in 2027.

“The plan is right now to widen that to three-lane curb and gutter, and there may be some medians in certain intersections for safety,” he said, “but overall three lanes with sidewalks and bike lanes from beginning to end.”

Ivey, who is in his 19th year as the engineer for Division 9, which includes Forsyth, Davie, Davidson, Rowan and Stokes counties, said that although the Lewisville-Clemmons Road improvement project between U.S. 158 and Peace Haven Road saw a slight delay in preliminary engineering several months, “our consultant will pick up work again after the first of the year. “We have a lot of work to do. Right-of-way acquisition is scheduled for June 2023. It seems like a long way off, but it will be here before you turn around. Construction is scheduled for June 2025.”

After focusing so long on the stretch from I-40 to U.S. 158, and particularly the segment from I-40 to Stadium Drive where a median is recommended, Ivey said that the interchange will become a priority.

“Last year we focused on the medians, where we’re going to put them, where we’re not going to put them, and we still have a lot fine tuning to do with that,” he said. “But the biggest thing we have to do is figure out is what the interchange at I-40 is going to look like. We need to make some improvements there. We have some ideas. Over the next year and year and a half that’s what we’re going to be focusing on. We’re excited about moving forward and working with the city and the council and getting that project moving.”

Ivey said that despite some budget challenges in 2019, business is booming with 36 projects under construction in Division 9, including the Northern Beltway, Business 40 and I-40 widening, with a value of over $1 billion.

“It’s exciting to see all the work that is going on,” Ivey said.

Spillman said that it has been another successful year for the Rotary Club, which has 75 active members, and recently hosted about 2,500 people at Tanglewood for the Totally Outstanding Awesome Stroll through Tanglewood — one of the events before the official start of the Festival of Lights.

He said that the annual fundraiser to finance its long list of projects to benefit the community netted about $50,000.

Johnson said that the Lewisville-Clemmons Chamber of Commerce continues to grow with 300 current members. The organization was represented at 15 ribbon-cutting for new businesses this year and again hosted the annual Clemmons Community Day in May where the 10th annual event drew a record 5,000 attendees, according to the Forsyth County Sheriff’s Office.