Titans fall to Vance in third round of 4-AA playoffs, finish season 11-2 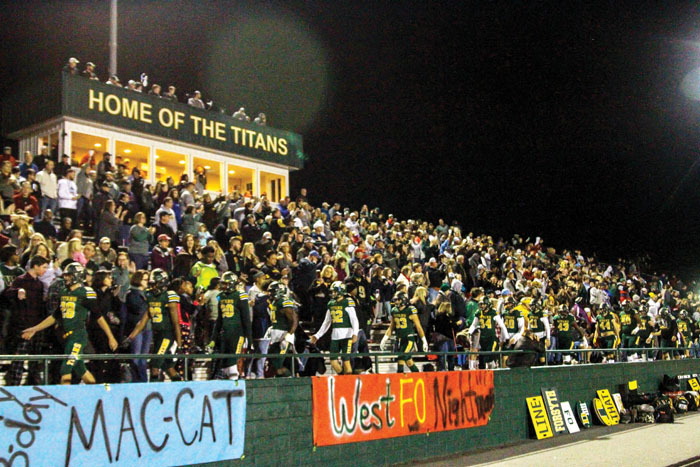 The Titans fell to Charlotte Vance on Friday night, 35-7, ending the season. Photo by Brad Richard.

The mood was somber as the West Forsyth football team and members of their families gathered on the field at Jerry Peoples Stadium one last time this season.

There were plenty of long faces and a few tears as the reality of a 35-7 loss to Charlotte Vance in the third round of the NCHSAA 4-AA playoffs set in.

Coach Adrian Snow reminded his team of their accomplishments this season — an 11-2 record, a Central Piedmont 4-A Conference championship — and let them know how much he loved them and how proud of them he was. He thanked them for continuing to move the program along on its winning path.

“Unfortunately, there are only eight teams that can walk away happy at the end of the season,” Snow reminded them.

Several of the team’s seniors offered their words about what wearing a Titans’ jersey has meant to them. Offensive lineman Ronni Elhadidy, linebacker Giovanni Ricciardi, and quarterback Jalen Ferguson were a few players who shared their thoughts with the group before they broke off by position, one last time together.

Vance struck early behind its big play offense and then relied on its vaunted defense to hold the Titans in check.

West, which entered the game averaging 40 points per game while surrendering just over 13 to its opponents, had trouble generating much of an offense throughout the game.

G’mone Wilson, who entered Friday’s game averaging 156.5 rushing yards per game, was held to a season-low 56 yards on 19 carries.

Zy Dillard finished with 73 rushing yards on 15 carries, and Jalen Ferguson, hounded throughout the game, completed just 8 of 17 passes for a season-low 40 yards. He was also sacked four times and threw two interceptions as the Titans were held to a season-low 175 yards of total offense.

“That should tell you how good their defense was,” Wilson said. “They were really getting to us quick. Anytime it looked like we had a lane to run in, someone stepped in there and bottled it up. They were fast and we just didn’t have a lot of time to make things happen. I know how good of an offense we have, and those guys seemed like they always knew where we were going. They were disciplined and they were flying around. That’s the best defense we’ve seen this year.”

Vance quarterback Austin Grier threw for 317 yards and two touchdowns and ran for another. He also proved elusive on several key third-down conversions to help the Cougars extend drives.

Jordan Payne was Grier’s primary weapon, finishing with five receptions for 216 yards and a touchdown — a 69-yard bomb on the first play of the game that gave Vance an early lead it would never relinquish.

“That was a big play, but we felt like at that point we were going to be O.K.,” Snow said. “Grier can get out in space and cause you problems and (Payne) played really well. Grier’s like one of those energy drinks that you drink later in the day — it’ll keep you up late at night thinking about it. He’s a talented player that caused us some problems.”

The Titans were held to 22 yards of offense in the first quarter and fell behind 14-0 with 7:29 left on a 15-yard touchdown run by Stefon Thompson. That drive, which started deep in West territory, was kept alive when Grier connected with Payne for a 72-yard gain on a third-and-10 play from the Vance 4-yard line.

The Titans responded with their only score of the game on its next series when Wilson capped a 12-play drive with a 12-yard run to cut the deficit to 14-7, a lead Vance took into halftime.

The Cougars tacked on another score with 2:04 left in the third quarter when Grier scored on a 1-yard run for a 21-7 lead, then added two more touchdowns in the fourth quarter — an 82-yard run by Joseph Morris and a 19-yard pass from Grier to Daylon Smothers on back-to-back possessions to pull away.

Vance finished with 560 yards of offense.

“Defensively, they are as good as advertised,” Snow said of the Cougars, who allowed 10 points per game during the season and held top-seeded Mallard Creek to seven points last week in their second-round win. “They have some dudes on defense, they really do. (Power Echols) and (Stefon Thompson)  are really talented at linebacker. They’ve got some guys on the interior that also did a heck of a job for them. As you go farther in the playoffs, the margin for error is smaller and smaller. The more successful you are, the tougher your opponent. And those guys were pretty good.”

Ricciardi was still confident the Titans could mount a comeback, even as Vance kept increasing its lead in the second half.

“I’m a competitor and I kept telling myself that we were going to make something happen and come back,” Ricciardi said. “We didn’t really hit the panic button. We kept thinking somebody was going to make a play and we would get back in it. It hurts, but I just love this team and love everyone here and they have made it the greatest three and a half years of my life. This is the greatest team I’ve been on and maybe the closest I’ve been on. Nothing came between this team. We stayed together all year. The laughter, all the workouts, listening to music in the locker room — that’s what high school football is all about. You can’t beat this experience.”

As tough as the finish was, Snow thanked his team for the journey this season.

“Ultimately, life is going to give you some bad days,” he said. “When they come, you’ve got to keep standing up and keep fighting. And in my 27 years now of doing this, the season hasn’t ended up well like it does for eight other teams. This class has given us a great ride. They’ve handled themselves with class and they did really well in our area and that’s all you can ask for. I love them. I’m proud of them, and they have represented West Forsyth and this community really well. We had a great ride. That’s what I’ll take from this season.”