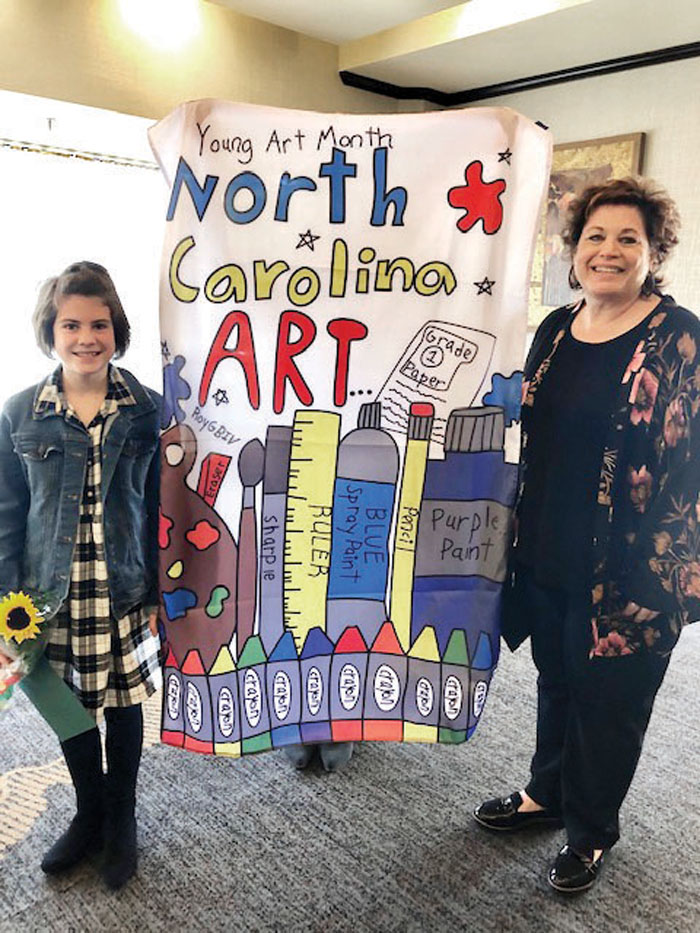 Amelia Bray, left, and Frann Paige, her former art teacher at Clemmons Elementary. Bray was recognized at an awards ceremony in Raleigh.

Amelia Bray realized when she was in pre-school that she already had a passion for art. The first thing that she remembers making was a fun drawing of potato people. “I just like doing art,” she said. “It is a way to express myself and my creativity.”

Now a sixth-grader at Clemmons Middle School, the young artist has an eclectic range of talent as she has produced drawings, bracelets and stylistic writing. She has even made some art from duct tape. Some of her duct tape art has been sold at the Alamance Regional Hospital gift shop in Burlington that is managed by her aunt. “She’s just very artistic,” her mother Andrea noted. “She is always looking for something different to do, and sometimes she even looks for ideas on Pinterest.”

Frann Paige was Bray’s art teacher when she was a student at Clemmons Elementary School. In addition to her artistic talent, Paige remembers her former student as being hard working and serious about her work. “Amelia was self-motivated to always do her best work possible. Her passion helped her to be dedicated and to stay on task. No matter what project she was given, she always strived to do her best.”

Paige was also was impressed by Bray’s interaction with her fellow students in the classroom. “I remember that she tried to help her peers. She would share things with them and teach them.”

As a young student under the instruction of Paige, Bray’s artwork began to be recognized in the community and at local venues.  As a second-grader, she won a contest for local students in her grade level, and her art from the contest was displayed at the Clemmons Public Library. During that same year, some of her drawings were on display at Sweet Frog, a local yogurt store that displays art from local students.

Bray also has fun with her artistic talents. A few years ago, she received a kit for her birthday that involved how to learn balloon art. She taught herself to make balloon art after receiving the kit, and she gave some of her creations as gifts at birthday parties. For two consecutive years, she participated in a Back to School festival doing her balloon art.

Bray’s most significant accomplishment as an artist occurred last year as a fifth-grader when she was the winner for North Carolina in the Youth Art Month Competition. Students from around the country were invited to produce a state flag with their own design. Bray’s flag was chosen as the winner for North Carolina, and in March it was displayed at the National Conference in Boston. “I think it’s awesome that her flag represented the NCAES (North Carolina Art Educators Association) at the national conference,” Paige noted. “This made North Carolina, and, of course, me proud.”

On Nov. 12, Bray was recognized in Raleigh at the NCAES conference for winning the flag competition. She received her flag back and also was given a certificate. “That was a great way to finish her career at Clemmons Elementary,” Andrea said.

Paige was also recognized in Raleigh for her role as Amelia’s teacher.  “For me, it was wonderful to be recognized at the NCAES in front of my peers,” Paige said, “and for Amelia’s artwork to be chosen was certainly rewarding.”

As a middle school student, Bray is now taking art with Stacey Stephens at Clemmons Middle School. “I like that we do a lot of different projects,” she said of her art class with Stephens. “Right now, we are making a clay pot, and it is a fun project.”

Bray’s creative energy also includes playing several musical instruments. She plays trombone for the school band, and she also plays the piano and violin. She recently played the piano for Youth Sunday at Clemmons United Methodist Church where her family attends.

Bray’s parents are understandably proud of their talented daughter. Andrea noted that she and her husband Dave have had the opportunity to watch their daughter’s passion for art grow throughout her young life. “Amelia has enjoyed art from a very young age,” her mother said. “We’ve watched her love for art as well as her skills develop over the years. We are amazed by her talent, and we are super proud of her accomplishments including winning the Youth Art Month Competition.”