Cadence at Clemmons employees honored for paying it forward 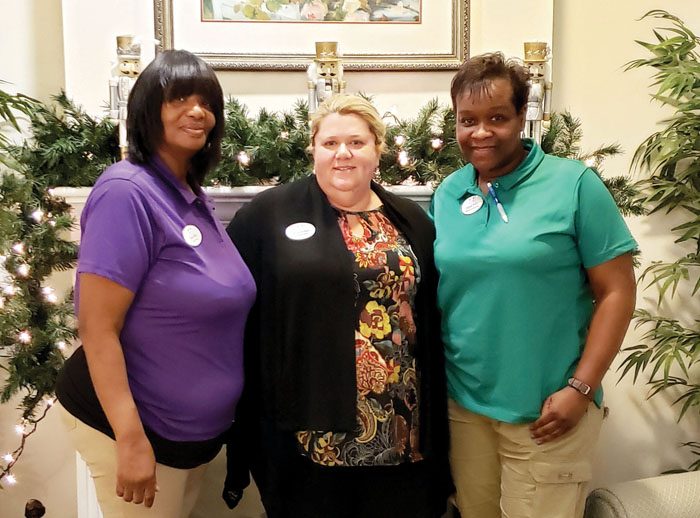 From left, Vickie Blair, Sherry Jackson and Angie Phifer. Blair and Phifer are the two women who returned the money, and Jackson is the executive director at Cadence.

The holiday season is a time for giving. Most gifts are planned and thought out, but two employees at Cadence at Clemmons on South Peace Haven Road delivered the gift of honesty when they returned $1,000 that was found while doing the laundry for a resident of the memory care unit at the senior assisted living facility

Vickie Blair, who has worked at the facility for six months, initially found $65 in a pocket when she was doing the laundry for the resident. When she returned to take his clothes out of the dryer, she found additional money that totaled $1,000. “I had washed the money, some credit cards and keys without realizing it,” she said. She immediately told her supervisor Angie Phifer, who has worked at the facility for five years, about what she had found. “I told her ‘thank you for being honest,’” Phifer said. “By her being honest, I knew that I had to be honest.” The ladies then reported what they had found, and the money and the credit cards were returned to the resident’s adult children.

The two employees were honored at a reception on Dec. 9 at the Cadence campus during an open house for prospective residents and their families. Heather Thomas, who is the vice president of operations for the North Carolina facilities for the company, presented plaques to Blair and Phifer. “It made me feel honored to be recognized and appreciated,” Blair said.

Shane Nixon, the director of sales at Cadence, noted that Blair and Phifer could have easily kept the money for themselves. “The resident would have never known about it,” he remarked. “Neither one of them thought about anything but returning the money. The children of the resident were delighted when the money was returned to them.”

Sherry Jackson, who is the executive director for the facility, had a similar sentiment. “Over the years, I have had employees turn in $20 or small amounts of money that they have found, but a $1,000 — wow!”

Both ladies feel that their altruistic deed was something that they had to do, and that they will be blessed for it. “It is a way of paying it forward,” Phifer remarked. “I know that there will be blessings for what we did.”

Blair offered a personal perspective on returning the money. ”If it were my grandmother, I would want her to be treated this way,” she remarked.

Jackson noted that the employees at Cadence at Clemmons such as Blair and Phifer are very dedicated to the residents at the facility.  “The residents see them more than their own families do in many cases,” she said. “We are the second family for many of our residents; in some cases, we are their first family.”

The two valued employees gave their own insights as to how much they valued the intrinsic aspect of their jobs.

“Some days, it makes me really want to come to work just as an escape,” Blair noted. “That’s my family,” she said referring to the relationships that she has with the residents.

“This type of work means the world to me,” Phifer added. “I could do other jobs, but I really enjoy what I do here.”

With Christmas less than a week away, it is quite uplifting to know that there are individuals like Vickie Blair and Angie Phifer who are a part of our community during this season of giving.