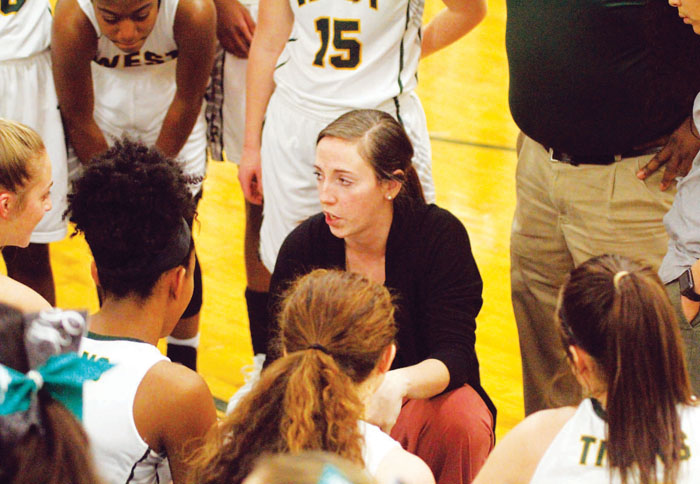 How does the West Forsyth girls basketball team plan to follow up on winning the NCHSAA 4-A state championship it captured back in March?

Simple, according to Coach Brittany Cox.

“We have talked about what the next step has been every season since I’ve been here,” said Cox, now in her fifth season as the Titans’ coach. “We want to continue to establish the culture of what we have done while rebuilding with the experience that we have. With what we have coming back, we will be relearning some things, and our returning players will take on different roles — leadership roles — with all the new, younger players we have this season. It’s always tough for the team that comes after the state championship team because of expectations and what happened last year. Our focus will be to maintain our culture and focus on the day-to-day things, not any kind of end-of-the-year goal.”

Cox said that the Titans will have a young team this season — six of the top nine players in the rotation are freshman and sophomores — and will be mixed in with several promising returning players.

Shakira Baskerville, a 6-0 junior post player, has been impressive in the early going and is averaging a double-double in points and rebounds.

Baskerville has also taken on the role as one of four captains for the Titans this season, something Cox said she is embracing.

“She is doing a remarkable job for us and the best thing is that she allows me to really push her,” Cox said. “She picked up right where she left off from last season and really gives us a presence in the post. She’s very unselfish and wants to make sure her teammates are involved. She is really starting to figure out how much potential she has and continues to push herself.”

Junior Alana Gary is also one of a handful of returning players who is also expected to expand her role.

Gary, who was unanimously voted by her teammates as a captain, will also be thrust into a starting role this season.

“Alana works so hard and is still learning a lot,” Cox said. “Her teammates really have complete respect for her, and she is as unselfish as it gets. She gets more excited when she has an assist than she is when scoring herself. She takes everything in stride and is a calming presence for us.”

Sophomore post player Caroline Johnson, who is 6-2, has also been thrust into a more prominent role.

“We’ve got two kids who are 6 feet or taller and that is a bonus,” Cox said. “Caroline got to play a lot for us in the state tournament, especially when we needed some size. She’s still learning a lot about basketball and wants to get better and will help the team do whatever it takes. She has a lot of potential to break out.”

Senior Cat Byun, another captain, may not see the court for a while after suffering her second concussion of the season during a game last month. Byun hasn’t returned to action yet, but that doesn’t mean that she isn’t making an impact.

“She’s at every practice and every game to do whatever she can to get us going and provide her leadership,” Cox said. “We are being cautious with her because there are bigger things on the horizon for Cat. As much as we value her play on the court and her leadership, she’s looking at an Ivy League education. She’s up for the Morehead-Cain scholarship. She’s taking AP classes in hopes of having a medical career someday. Basketball doesn’t need to get in the way of any of that. She’s the humblest kid I think I’ve ever coached, and she will find a way to have an impact for us, even if she isn’t able to get back on the floor for us.”

Senior Ty Pate, who played on the junior varsity team last season, is also expected to be an impact player this season.

“Ty is another one of our captains and is a great rebounder,” Cox said. “She really understands how her influence on our younger players can benefit our team.”

One of the newcomers to the team has a name that Titan followers are quite familiar with.

Cox said that while there are plenty of similarities, the sisters couldn’t be more different.

“That competitive desire is the same, for sure,” Cox said. “Everybody talks to her every day about her sister. Maddie is a great player regardless of who she is related to. I’ve known her for a while now and she knows my expectations. She’s in the gym most every morning before school getting up between 600-1,000 extra shots every week. That gets me up out of bed really early during the week, but that’s a great problem to have. She is finding herself as a player and her teammates are really taking to her.”

Cox knows that play in the Central Piedmont 4-A Conference will be challenging throughout the season.

“Glenn and East Forsyth probably return the most experienced teams, and Reagan has a lot of great players as well,” Cox said. “We hope we are playing our best basketball when conference play opens on Jan. 10. Yes, we’ll have some growing pains because we are a younger team. We have the kids who want to rise to the occasion, but that will take some learning. We want them to realize that we don’t have to win every game to be a winner, and we don’t have to win every game to compete. We want to teach this group what it takes to get there.”

Titans’ boys basketball team ready to bounce back from…