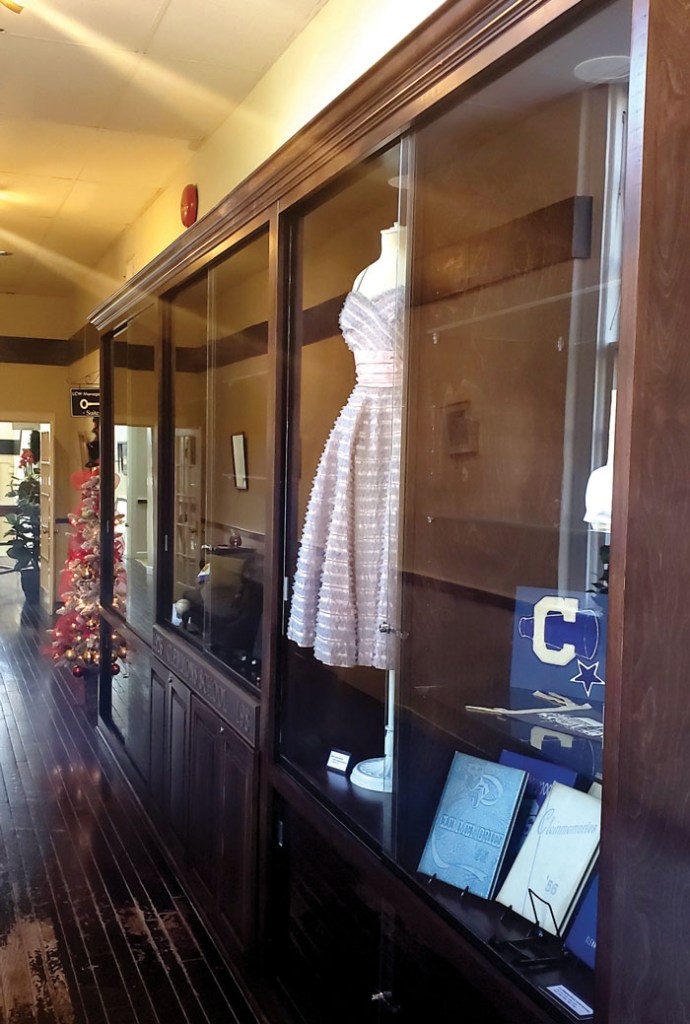 The new memorabilia cabinet in the former Clemmons School.

A labor of love that has involved three years of planning and effort has resulted in the installation of a memorabilia cabinet in the former Clemmons School. The building is now Historic Broyhill Office Suites and Event Center and is located on Clemmons Road. The cabinet was planned to represent the decades of history when the school served the community from 1926 to 1981.

The idea for the display cabinet came about after two reunions took place that reunited former students of the school. The class of 1956 celebrated its Golden (50th) Reunion in 2006 and invited all former graduates to attend. In 2016, a Diamond (60th) Reunion was held and was open to anyone who ever attended the high school and elementary school. Individuals who attended the two events discussed the idea of beginning a fundraising project to have a cabinet built to display memorabilia that alumni of the school had in their collections.

Historic Broyhill allocated a space for the planned cabinet in the eastern corridor of the building. This required that a bank of existing office cabinets be removed. These cabinets were 18 feet long, and the new memorabilia cabinet was planned to occupy the same space. A committee of alumni from the school was formed to begin a fundraising project to raise funds for the new cabinet.

They went to Poindexter Lumber with a sketch and specifications of what they envisioned. The committee decided when half the money needed for the project was raised, they would go forward with the plan. The craftsmen at Poindexter Lumber built three 6-foot cabinets that, after installed, would be combined as to look like one 18-foot cabinet. The cabinets were completed and installed in late October. After installation, alumni of the school were encouraged to donate items for the cabinet, and already there are many fascinating items on display.

On the wall opposite the cabinet are framed photographs of the seven principals who served the school. A “key dates” display is planned to be added soon that will highlight the timeline of notable events from the beginning of the school in 1926 until the present.

Clemmons resident Barbara Mahannah helped to organize the 2006 class reunion that eventually led to discussions about the collection of memorabilia from the old school. She and her husband, Tom, graduated together in 1956 as members of the last graduating class of Clemmons High. They married soon after finishing high school and have been married for 63 years. “We are now in our 80s,” she said, “so we probably should have started the project of collecting memorabilia about 30 years sooner.”

She is excited, however, that the project has now come together, and she expressed her appreciation to Ed Broyhill, owner of Historic Broyhill and Kristin Johnson, the managing director, for allocating space for the display in the former school. “We really enjoy the fact that the tenants of the building are so complimentary about the cabinet and the historic displays,” Mahannah noted.

Among the items that are on display is a lunch token from 1932 that was worth five cents at the time. There are also photographs from the 1930s, a prom dress and a letter sweater from the 1950s, several report cards and diplomas representing various years, photos of students from years past and photos of sports and cheerleading teams. A particularly unique item on display is a baseball from the 1948-49 baseball team that won the state championship. This was donated by local resident Bobby Cheek, and it was signed by the members of the championship team.

Another item that will soon be donated is a ring that was recently found by local resident Emily Atwood Cheek. She discovered a Clemmons class ring that is dated 1928. It was given to her years ago by her aunt who attended the school nearly a century ago.  She and her husband, Odell, plan to do some research about the ring before donating it.

Barbara Mahannah is grateful to the community for helping with fundraising efforts for the project and to the Clemmons Historical Center for donating items. “Funds raised from the community have been very helpful,” she said.

She noted that additional plans are in the works to celebrate the history of the old Clemmons School with a dedication planned in the spring. There will be items displayed during that event that cannot be put into the cabinet.

She is also extremely grateful for the committee that has worked hard over the last three years to raise funds for the project and to promote it. The committee encourages alumni and their families to check through their collections and to contact any member of the committee if they have items to donate. The members of the committee are: