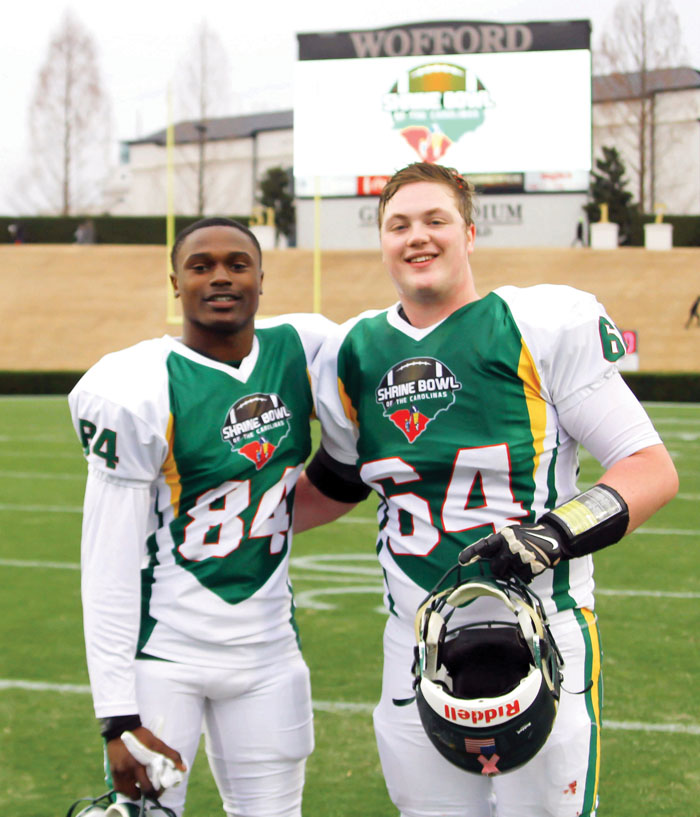 G'mone Wilson (84) and Grant Copeland (64), who played in the Shrine Bowl. Photo by Brad Richard

Wrestling team off to solid start

Jason Hooker, in his second season as the team’s coach, has gotten stellar performances from several wrestlers as the team heads into the meat of their season in 2020.

Three wrestlers recently finished in the top five of the Tiger Holiday Classic in Chapel Hill, which featured 41 teams from across the state.

Senior Evan LaBella finished second at 132 pounds and currently has a record of 19-6, which leads the team.

Arnold ran his record to 11-9 and Zaitawi stands at 18-5 heading into the new year.

Senior Mike Dalton, the defending NCHSAA 4-A state champion at 113 pounds, has gone up to the 120-pound weight class and is sporting a 18-3 record.

The Titans will be back in action at the Royal Viking Classic on January 4 at North Wilkes.

The boys and girls swimming teams both had respectable finishes at the Bob Sawyer Invitational on Dec. 20 at Greensboro Aquatic Center.

The meet featured 23 teams and 533 swimmers and divers from across the state.

Connor Greene won the 50 freestyle and finished fourth in the 100 breast. Luke Vlahos finished second in both the 100 and 200 freestyle events, and the both swam legs on the 200 and 400 freestyle relay teams that had top-eight finishes. The 200 free relay team finished .01 seconds off the school record.

The boys basketball team got their first win of the season in the Frank Spencer Holiday Classic, defeating Carver 68-62 in the consolation round of the Wake Forest Baptist Health Sports Medicine Bracket.

The Titans went 1-2 in the tournament, losing their opening round game 51-45 against North Forsyth and then dropping their final consolation game 73-68 against North Surry, Coach Kevin King’s alma mater.

Despite the Titans’ early season struggles, King feels confident that his team is coming together.

“We’ve had a pretty tough schedule and we’ve got a lot of guys who haven’t played varsity basketball before,” King said. “The goal in the Frank Spencer is to always pick up at least one win. The reality of this tournament is, though, that two teams are going to finish the week 0-3, and that’s unfortunate. You want to use this as a week to continue to build as you gear up for the conference season.”

The Titans will be back in action and will open Central Piedmont 4-A Conference play on Jan. 7 at East Forsyth.

The girls basketball team headed into the holiday break with a 7-4 record and winning three of its last four games.

The Titans will also open conference play at East Forsyth, a team that beat them earlier this season in the Mary Garber Tournament, 51-47.

It was at East Forsyth last season when the Titans lost to the Eagles 47-38, that Coach Brittany Cox and several players pointed to as the turning point for the team.

The Titans went on to win their last 17 games of the season and the NCHSAA 4-A state title.

The game was held on Dec. 21 at Gibbs Stadium on the campus of Wofford College.

Wilson was the Offensive Player of the Year in the CPC and finished his career as West Forsyth’s all-time leading rusher, finishing with 4,745 yards and 62 touchdowns for his career.

Copeland was an anchor on the offensive line at center for the Titans this season, opening holes for Wilson and Zy Dillard and giving plenty of protection for the passing game for an offense that averaged 37 points per game.