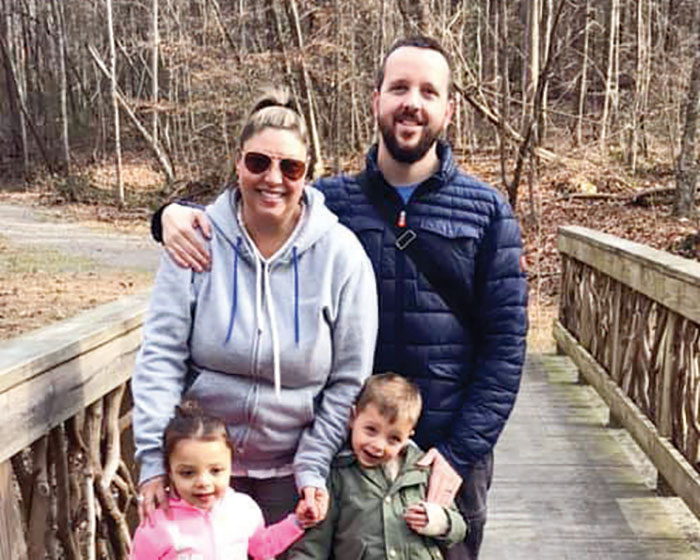 Xylina Tomlinson with her family at Lake Lure, including husband Will and their two children.

Xylina Tomlinson spent her early childhood years in the Durham area. The youngest of three children, she was always encouraged to be active in sports and other extracurricular activities. “My brothers and I weren’t really allowed to watch television. So we stayed busy doing things,” reflects Tomlinson. The outgoing Tomlinson spent her high school years dancing and playing soccer. She also enjoyed learning how to play musical instruments — both the violin and piano.

The well-rounded student thought she knew what she wanted to study in college. “I felt pretty confident that I wanted to be a marine biologist,” mentions Tomlinson. She headed to the University of North Carolina at Wilmington to focus on marine biology and oceanography. “When I was in school, it was basically learning about the ocean tides, measuring the moon from the earth, and I realized I didn’t want to do that for the rest of my life,” explains Tomlinson. She switched gears to major in communications with a concentration in hostage negotiations. She also minored in Spanish.

During Tomlinson’s time in college, she had been dating a Marine who was in Special Forces. He had been on many deployments during that time to both Iraq and Afghanistan. The missions Tomlinson’s soon-to-be fiancé experienced were very grueling, challenging and emotionally draining. “The things he saw and experienced were very hard on him. He suffered from post-traumatic stress disorder (PTSD). He had horrible nightmares. It was hard to see the toll it took on him,” remembers Tomlinson. Just three months after Tomlinson’s fiancé had proposed to her, he ended his life right in front of Tomlinson. “It was devastating,” she said. “I had a very hard time processing it.”

Tomlinson’s mom realized that her daughter was having a difficult time coping with the traumatic loss of her fiancé. “I was in training for a manager position,” remembers Tomlinson. “My mom quit the job for me and let them know I was really struggling. I was suffering from my own PTSD. She moved me out and back home with her for several months.”

Tomlinson continued to make sense out of her new normal, which included a brief move to Asheville. “I realized that I needed to be myself, not date, find myself, and be near family. I finally moved to Lewisville to be near my brother who had children. I wanted to be close to them and a part of their lives,” says Tomlinson. She attributes family to helping her grapple with her own PTSD and having a counselor that helped put everything into perspective, including finding grace.

Tomlinson started over professionally too, which turned out to be quite serendipitous. While working at Forsyth Country Club as the head receptionist, Tomlinson met her future husband. “He came in as the IT guy to fix my computer — Will saw that my dog was my screensaver. He wasn’t my type per se, but he was so clever and witty. He told me his dog was lonely and needed a play date at the dog park. I figured I would give him a chance,” smiles Tomlinson. The play date was a hit for the humans as well, and Xylina was won over by Will and eventually married him.

They expanded their family to include humans as well. Parents to a son, 4, and daughter, 3, they find that life these days is never dull. “Being a parent has taught me how to love somebody unconditionally. It’s taught me more patience. Every day you learn how to love someone else better. What works for my son may not work for my daughter,” says the mom of two. “Right now, I’m their whole world.”

Tomlinson has found a way to hone her professional career in communications and still be home with the kids. She and her brother own and operate Great Online Promotions by Go-Promo.com. “We offer promotional marketing solutions to small businesses and corporations,” explains Tomlinson. “Whether we are helping provide live customer support on artwork proofing, paired with on demand website ordering, and various promotional products, we do it all. I really enjoy working with my brother.”

Tomlinson is enjoying the balance she and Will have cultivated for their family of four. “We love to be on the go — whether we are hiking at Hanging Rock, Stone Mountain or the Linville Gorge, we have our kiddos outside,” reflects Tomlinson.

Our neighbor has found that even through the tougher times, she prevails with family. As Confucius once said, “It doesn’t matter how slow you go, as long as you don’t stop.”