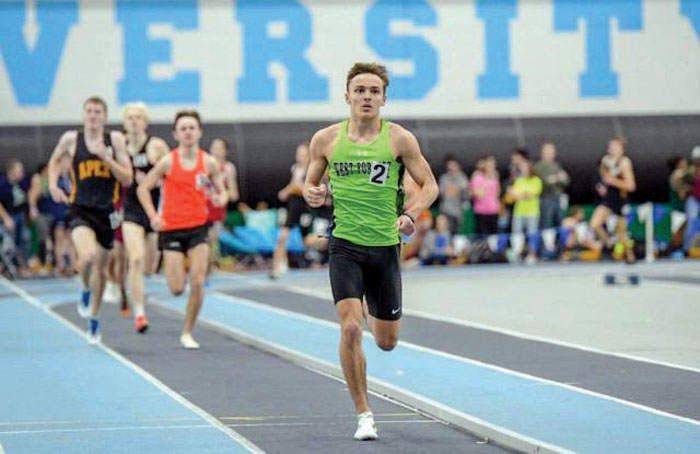 Atkins, a senior and defending champion in the 1000 meters at NCHSAA 4-A indoor state championships last season, is still fighting to earn a qualifying standard in that distance so he can compete in this year’s race.

Atkins, who battled tendonitis in his knee during cross-country season, has been fighting what he called flu-like symptoms for several weeks, which has hampered his training and his indoor meet participation.

“I’ve run in one meet all season so far,” Atkins said. “I’ve got a couple more chances to qualify for the state meet and I feel like I’ll get there. I just need to put in a good time at one of the meets on my calendar coming up. But yeah, this has really hung around for a few weeks. Fever, sore throat, fatigue, stuffy nose.”

Atkins will have one chance this weekend. He’ll be traveling to Lynchburg, Virginia, to compete in the Virginia Showcase at Liberty University.

“It’s one of the biggest meets in the country and I’m going,” Atkins said with a sly laugh. “I’ll be there no matter how I’m feeling.”

Atkins was also extended an invitation to run in the Camel City Relays Elite Races, which will be held on Feb. 8 at JDL Fast Track.

He will be competing in the “Engels 8” in the 800-meter run against some of the top high school runners in that distance in the Southeast.

The race, named after former Reagan runner Craig Engels, will be the first time high school runners have competed at the event in its eight-year history.

Engels, who ran at N.C. State and Mississippi State, now is a professional runner seeking a bid to the U.S. Olympics team for the 1,500 meters.

“He called me after I accepted the invitation to run in the race,” Atkins said. “It’s a huge honor to be asked to compete, and even bigger because he helped pick the field. I’ve kind of followed his career since my sophomore year because he is from this area and has such a successful career. There is talk that he will be taking all of us to dinner while he is in town, so that should be fun. I look forward to competing against some of the best runners in the country.”

The “Engels 8” also happens to fall one week before the 4-A state indoor championship, so Atkins has quite a busy — and important — calendar set up for the next several weeks.

Atkins, who signed to run indoor and outdoor track for Duke last fall, is eager to close out his indoor season as he approaches outdoor season this spring, where he hopes to capture a state title in the 800 after finishing second last year.

“I’m happy to say that Duke is where I’ll be running for the next several years,” Atkins said. “We were pretty heavy in the recruiting process last spring and the coach came to see me out the state meet (outdoor). I took a visit to campus soon after that and loved it. Everything stood out to me and it just felt right. Everything just kind of came together.”