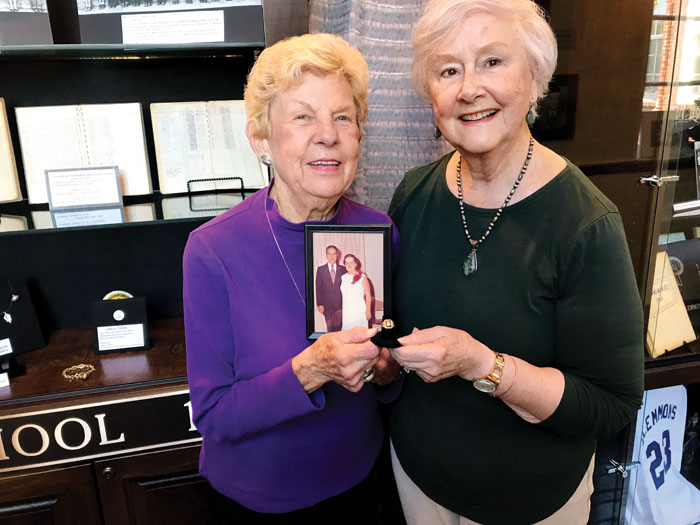 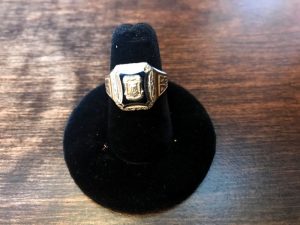 While looking through her jewelry keepsakes recently, Emily Atwood Cheek discovered the 1928 Clemmons High School class ring that she had long forgotten about.

The class ring had belonged to Mildred Swaim who grew up in a house on Clemmons Road that is located next door to Piedmont Federal Savings & Loan.

Discovering this treasure prompted Emily and husband Odell to research the history of Mildred Swaim and how Emily came to be the eventual owner of the ring. Odell said he was grateful that the early Moravians were factual and prolific record keepers. He could find examples of Mildred Swaim being very active in Clemmons Moravian Church and the Moravian Church School she attended in her early years. Some of the records provided the following information.

Mildred Swaim, born in 1911, was the only child of J.W. Swaim and his wife. The Swaims lived at that time in the Clemmonsville section of the Moravian land holdings which later became the location of the Clemmons Village.

In January 1928, the Clemmons Moravian and the Hope Moravian churches combined services and shared one pastor, the Rev. L.G. Luckenbach. One report states that the 17-year-old Mildred Swaim was appointed to be the choir director of the combined congregations.   Another report is an announcement of the “Closing Exercises of the Clemmons Consolidated School.” It stated that three Clemmons Moravian Church students were graduates — no names were given but we can assume that one of those students was Mildred Swaim. It is obvious from these reports that Mildred Swaim demonstrated a deep dedication to her Moravian heritage.

After graduation, Mildred Swaim married the Rev. Joshua Leroy Levens. Rev. Levens was a 1931 graduate of Catawba College in Salisbury.  During their 65 years of married life, the Levens were involved in the pastoral work of serving God in the many branches of the Reformed Church of Christ.

Several years before retiring from active church ministry, Rev. and Mrs. Levens moved to Winston-Salem to pastor several churches. Emily and Odell Cheek had become friends through Emily’s parents, Mr. and Mrs. Charles Atwood. The Atwoods had been friends with the Levenses for many years.

“Mildred and Josh were not blood kin to my family. They were friends with my mom and dad and I called them aunt and uncle. Mildred and Josh had no children of their own and they loved my brother and me to death.”

Emily cannot recall the exact time she was given the 1928 Clemmons High School class ring but does recall the many times when the families visited and the class ring was discussed. During these visit, Mildred Swaim Levens indicated that she wanted to give the class ring to Emily Atwood. “The ring was given to me by Josh after Mildred passed away because he knew how much she and I meant to each other.”

Mildred Swaim Levens died in 1986 and is buried in the Clemmons West Lawn Memorial Cemetery, about a mile from where she lived while a student at Clemmons High School.

Emily is both excited and sentimental over this gift and is proud to add this treasure to the Clemmons School Memorabilia Cabinet. “Aunt Mildred’s class ring is the oldest ring donated so far donated. There will be a picture of her along with the ring.”

“The were just special, special people.”

Lewisville-Clemmons Chamber Board of Directors begins the new year…