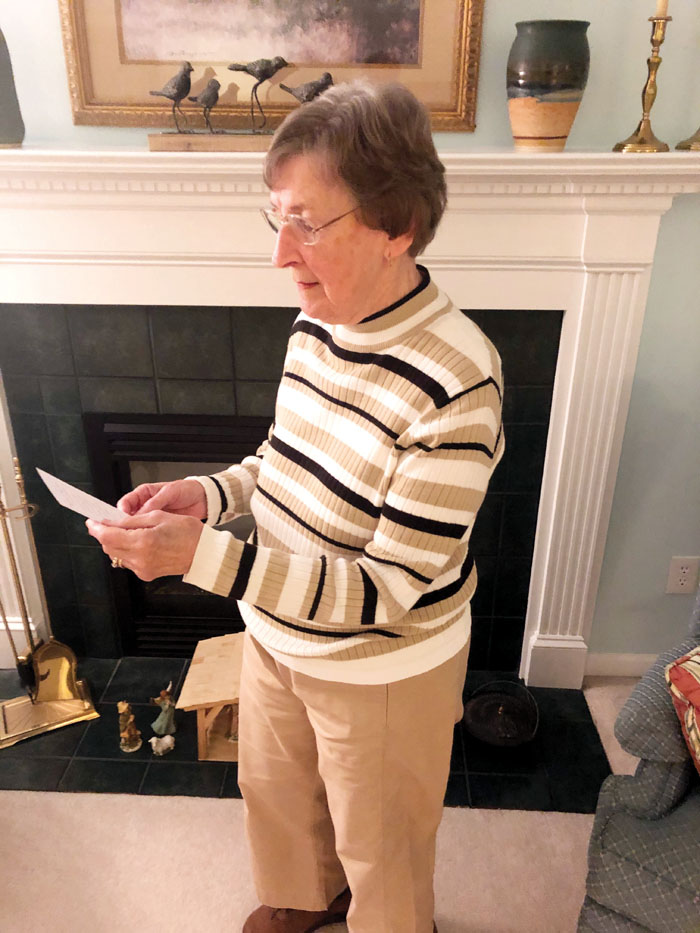 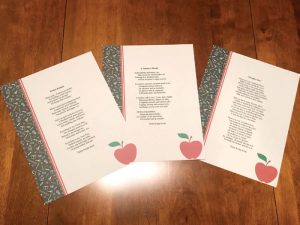 Some of Helen Keck’s pocket poems

When Helen Keck’s middle son was diagnosed with dyslexia decades ago, she developed a passion for using written words to inspire those who struggle with reading or any challenging situation.

Now 84, the energetic Clemmons senior inspires others with “pocket poems” that she has with her wherever she goes. “I enjoy meeting people wherever I go,” she said, “It might be the grocery store, or the doctor’s office or at church. I just open a conversation, listen to their story, find out where they are coming from, and them read them a poem. Sometimes, they ask me to give them the poem, and I do.”

Helen is a retired nurse and educator who settled in Clemmons with her husband Irvin in 2004. The couple has lived in nine states. Both were born in Illinois where they met, and Irvin’s career in sales before his retirement has taken them around the country. Now married for 62 years, they will both celebrate their 84th birthday this month. “I am four days older than he is,” Helen remarked, “so for four days I get to be the boss. I’m the boss anyway,” she joked, “but for four days I take advantage of it.”

The couple has three sons. Burton and Rodney, the two eldest, live in North Carolina. The youngest, Philip, lives in Rhode Island.

Helen views the distribution of her poetry and the inspiration that it brings as a ministry that is secondary to her primary role as her husband’s caregiver. She has cared for him off and on since 2011 when he broke his leg. “I have saved his life twice,” she said without going into detail, but she noted that he is doing well and does not need currently need much constant care.

When she is out in public, Helen thrives on the chance to meet people and enjoys a chance to have a conversation with anyone she meets. She carries poems, proverbs, and prayers in her pocket, and when the opportunity arises to share one of them, she does it with unbridled enthusiasm. “It is my mission to engage people and to help them to discover the joy of storytelling,” she said. “I do this through my poetry.”

Theresa Hoffman-Makar is the project manager for Age-Friendly Forsyth. She first met Helen at a community conversation meeting held by the community initiative that gathers information from residents about senior services. She was immediately struck by Helen’s energy and enthusiasm. “She makes a point to learn about services that are available to seniors,” Hoffman-Makar said. “That’s why she came to the meeting. She is a unique person who randomly meets people, starts a conversation, and then gives them a pocket poem. We collect a lot of data about seniors, but she puts a story to the data.”

When asked if her poems are original, Helen said that she has written some of them and that some are poems that she has collected. Her original poetry is from the heart, and there is no motive other than to share what she has written. “God never told me to publish,” she remarked. “When I share things with people, I don’t know where they go. I’m not on social media so I don’t know if they get shared by others, but I know that they go where are supposed to go.”

Debra Perret can personally attest to what it is like to receive one of Helen’s poems. Like Hoffman-Makar, she met Helen at a meeting for the Age-Friendly initiative where Perret serves on the Leadership Team. “I barely had time to squeeze the meeting into my schedule that day, but I decided to go,” she recalled. “I was having a difficult day, and Helen gave me one of her poems. It was exactly what I needed at the time. After reading it, I had tears streaming down my face, and I realized that day that I was meant to be the receiver and not the giver.”

Helen started writing poetry for children at the age of 70 when she began tutoring children in the public schools who were dealing with reading difficulties. She went through an extensive training program called the Augustine Project through St. Paul’s Episcopal Church before tutoring for several years. In her tutoring role, she enjoyed sharing her poetry and giving books to the children she met.

Just before being interviewed for this story, Helen mentioned that she had just written a poem that she will be sharing soon.  It reads as follows:

“My face in the mirror is a reflection of smiles given, of kindness shared, of sorrows faced, of tears shed, of lessons learned, of loved shared, of joys lived.”

Helen Keck is an inspiration for both fulfilling her responsibilities in caring for her husband and for spreading joy when she has the opportunity to meet people outside of her home. On your next trip to the grocery store, it would be a good day if you could meet her and leave with a poem in your pocket.

There are many senior opportunities in Lewisville and Clemmons